Jipson (256) gives her name as E-noo-kah, which can readily be identified as the birth order name, Hīnū́gā, for the first born female of a family. Her other name, He-noo-ni-nun-ka, is significantly different, and should be her clan name. This is probably a version of the name Hinugᵋníka, "Girl Bear" [literally, "Little Woman"], a female name in the Bear Clan. (McKern 70, #15) Adding the neutral positional suffix, -nąk, which is sometimes appended to names, we have Hinųgᵋnįgᵋnąka, which most nearly matches the phonetic rendering of the name. Much of this is confirmed elsewhere in Jipson's work (407), where he adds, "Armel married a Winnebago woman called the Raven Woman, an orphan sometimes called hee-noo [Hīnū́], meaning first born daughter." This confirms her birth order name, and her clan, since Raven names are almost exclusively those of the Bear Clan. However, in an interlinear text we learn further, "Kaǧiwįga hagaire Hínų Wainą́nįka higaires’aže, aíreną," which means, "Sometimes they called Raven Woman, 'First Born Orphan Daughter,' it is said." In Hocąk "Raven Woman" is Kaǧiwįga, from kaǧi, "raven, crow"; -wį-, a feminine gender suffix; -ga, a definite article suffix used in personal names. It should be noted that the Hocągara called the Menominees Kaǧi, so there exists some possibility that "Raven Woman" means "Menominee Woman."

“Oliver Armel (or Amel, also Emmell) — In 1838 this man made an affidavit that he was a native of Canada, but naturalized in the United States ten years ago, has been in the country eighteen years. About fifteen years ago [1823] he was married to E-noo-kah (or He-noo-ni-nun-ka), otherwise called Elizabeth, a full blood Winnebago. They were married according to the Indian ceremony, but, in order to save trouble regarding the legitimacy of his children, they were remarried by Esq. Mills of Madison." (Jipson, 256)

"Members of the Armel family say that Armel’s wife was previously married to a Frenchman from Canada for whom she made a belt of yarn. Becoming involved in difficulty with his wife’s relatives, he fled to Canada, where Armel saw him and admired his belt. He resolved to find the maker of the belt, which he did and finally married her. Their children were Catherine, born 1824; Oliver, 1826; Louis, 1830; Joseph, 1833; Nancy, 1836 and Prosper.” (Jipson, 256) 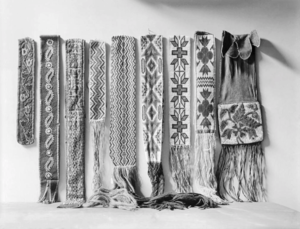