Deborah Read was born about 1707 to John Read and Sarah White, the second of seven children.[1]

Deborah first met Benjamin Franklin in 1723 at age 15; he was 17 and had just arrived in Philadelphia. He soon began boarding at the Read home, and they grew close and discussed marriage. When Franklin left the following year to set up his own printing house and met complications, Deborah's mother sought a different suitor for her daughter.[1][2]

Deborah married John Rogers in 1725, and within weeks learned he already had a family in England. She left Rogers and returned to her mother's home. By 1728, Franklin returned to Philadelphia with a successful printing house. The two reunited and were joined in common-law marriage on September 1, 1730.[2]

She operated a stationery shop out of the front of Ben's printing house.[2]

Her fear of ocean voyages prevented her from traveling with Ben, so she spent many years alone in Philadelphia while Ben was in Europe.[2] They were apart while Ben traveled in England from 1757 to 1762, and left again around 1765. On December 19, 1774, while Ben was still away in England, she died unexpectedly of a stroke. They had spent only two of the last seventeen years of Deborah's life together. She is buried with Benjamin Franklin at Christ Church Burial Ground in Philadelphia.[2][3]

WikiTree profile Read-725 created through the import of HERMANSON_RICHARDSON.ged on Sep 13, 2011 by John Hermanson. See the [http://www.wikitree.com/index.php?title=Special:NetworkFeed&who=Read-725.

Is Debby your ancestor? Please don't go away!

ask our community of genealogists a question.
Sponsored Search by Ancestry.com
DNA Connections
It may be possible to confirm family relationships with Debby by comparing test results with other carriers of her mitochondrial DNA. However, there are no known mtDNA test-takers in her direct maternal line. It is likely that these autosomal DNA test-takers will share some percentage of DNA with Debby: 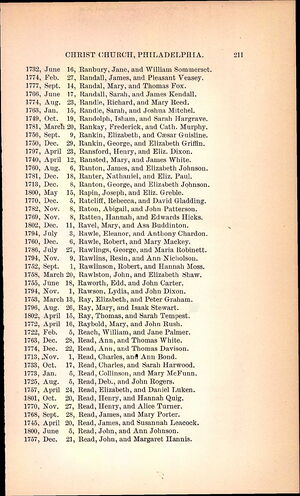 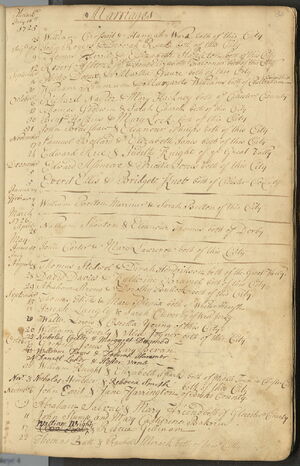 Leave a message for others who see this profile.
There are no comments yet.
Login to post a comment.
Brian Taussig
What is the source for the birth date of 14 Feb 1708?
posted Jun 22, 2020 by Brian Taussig