Henry Readford was an Australian Bushranger

Henry Readford was born in Mudgee NSW his father,Thomas Readford (in convict records as Thomas Ratford) was transported to Sydney on the ship Marquis of Wellington which left London on 1 September 1814 he was from York and his crime was he stole four hides from a shoemaker Henry was the youngest of eleven children his fathers fortune changed and the family became landowners and hoteliers near the Hawkesbury River area, his older brother was highly respected and known as 'The Father of Warren', a town in N.S.W

In 1870 Henry Readford was working as a stockman on Bowen Downs Station near Longreach in Queensland noticing that some remote parts of the property, which stretched some 228 km (142 mi) along the Thomson River, were seldom visited by station workers, he came up with a plan to steal some of the station's cattle along with two other stockmen, George Dewdney and William Rooke, he built stockyards in an remote part of the property, and slowely gathered a mob of 1,000 cattle, which he then took from the property, all without any of the station workers realizing what was going on.

Readford knew he couldnt sell the cattle in Queensland as the brand would be reconized and the cattle be known as stolen so he headed for South Australia through the Channel Country and the Strzelecki Desert only ten years earlier, explorers Burke and Wills had set out to cross the continent along the same track, and died trying. This was a great droving feat it took three months and 1,287 km (800 mi) included in the stolen cattle was an imported white bull belonging to the Scottish Australian Company. Two cows branded 'LC' and the bull were sold to a storekeeper for rations and the rest of the cattle were sold for £5000 to Blanchewater Station Bowen Downs near Marree employees tracked the large herd to South Australia and identified the white Bull they were many weeks behind Readford.

In April 1871 Readford married Elizabeth Jane Scuthorpe at Mrs Elizabeth Nevell's home in Lewis Street, Mudgee, NSW the couple had at least one child, a daughter, Jemima Mary Elizabeth,Readford was caught in Sydney in 1872, and faced trial in Roma, Queensland. However, the jury members were so impressed by his achievements that they found him not guilty, whereupon the judge, Charles Blakeney, remarked, "Thank God, gentlemen, that verdict is yours and not mine! In response to the verdict, in July 1873, the Government shut down the Roma District Criminal Court for two years but rescinded the order in January 1874.

In 1881 Readford was charged with several counts of horse stealing and was jailed for eighteen months in Brisbane after his release, he drove cattle from the Atherton Tableland to Dubbo In 1883, on behalf of Macdonald, Smith and Company, Readford drove 3,000 cattle which were the first mob taken to Brunette Downs station he is said to have pioneered his own property Corella Downs now part of Brunette Downs on the Barkly Tableland in the Northern Territory where he was the station manager and in 1899 he became the manager of McArthur River Station.

In 1901, he set out from Brunette Downs to explore Central Australia, but although a strong swimmer, was drowned in Corella Creek, which had become a raging torrent after rain.There is a annual Harry Redford Cattle Drive which commemorates Readford's exploits as a drover a range of riders from the city and country participate in this droving expedition, taking part for three days or up to three weeks what ever their choice may be 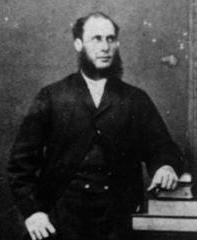 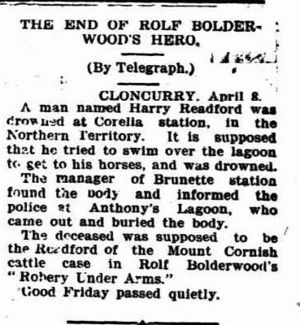 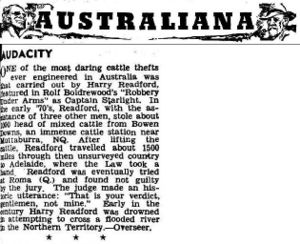