Ronald Reagan was the 40th President of the United States, as well as an American actor and veteran.

Ronald Wilson Reagan was born on 06 February 1911, to John and Nelle Reagan in Tampico, Illinois.[1][2] He had one sibling, Neil.

Ronald attended high school in nearby Dixon and then worked his way through Eureka College. He earned a Bachelor of Arts degree in economics and sociology, played on the football team, and acted in school plays.[3][4]

After graduating, Ronald moved to Iowa, where he became a radio sports announcer.

In 1952 Ronald married Nancy Davis, who was also an actress, and they had two children.[3]

29 April 1937 Ronald enlisted into the U.S. Army Reserves as a private assigned to Troop B, 322nd Cavalry in Iowa. He was next appointed in the Officers Reserve Corps of the Cavalry on 25 May 1937, and assigned to the 323rd Cavalry on 18th of June. He went into active duty on 18 April 1942. Due to Ronald's nearsightedness, he was classified for limited service only, so he was ineligible for overseas duty. His first assignment was at the San Francisco Port of Embarkation at Fort Manson, California, as a liaison officer of the Port and Transportation Office.

Upon the approval of the Army Air Forces, Ronald applied for a transfer from the Cavalry to the AAF on 15 May 1942, and was assigned to AAF Public Relations and subsequently to the first motion picture base in Culver City, beginning his foray into acting. On 14 January 1943 he was promoted to First Lieutenant. He then returned to the first motion picture unit and was promoted to Captain on 22 July 1943.

In January 1944, Captain Reagan was ordered to temporary duty in New York City to participate in the opening of the sixth War Loan Drive. He was reassigned to the 18th AAF Base Unit on 14 November 1944 where he remained until the end of WWII. He was recommended for promotion to Major on 02 February 1945, but this recommendation was disapproved on the 17th of July of that year. He returned to Fort MacArthur in California, where he was separated from active duty on 09 December 1945. By the end of the war, his units had produced some 400 training films for the AAF. His reserve was terminated on 01 April 1953. [7]

A screen test in 1937 won Ronald a contract in Hollywood. During the next two decades he appeared in 53 films.[3][4]

As president of the Screen Actors Guild, Ronald became embroiled in disputes over the issue of Communism in the film industry; his political views shifted from liberal before 1962 to conservative. He toured the country as a television host, becoming a spokesman for conservatism.

Ronald was the 33rd Governor of California, in office from 02 January 1967 to 06 January 1975.[3][4] He went on to win the Republican Presidential nomination in 1980 and chose as his running mate former Texas Congressman, United Nations Ambassador, and future United States President George H.W. Bush. Ronald won the election and became the 40th President of the United States of America. He was elected to two terms in office, serving from 20 January 1981 to 20 January 1989.[3][4]

On the 20th of January 1981, Reagan took office. Only 69 days later he was shot by a would-be assassin, but quickly recovered and returned to duty. His grace and wit during the dangerous incident caused his popularity to soar.[3]

Ronald pushed many new projects while in office, especially known for his "Reaganomics", which advocated reducing tax rates in order to encourage economic growth, monitoring currency to reduce inflation, deregulation of the economy, and reducing government spending.[4] He was re-elected for a second term by a landslide in 1984, proclaiming that it was "Morning in America".[4]

Foreign policy was the theme of his second term, including the end of the Cold War, the 1986 bombing of Libya, and conflict with Iran.[4] Referring to the Soviet Union as an "evil empire", the Cold War was prime in his sites, as he worked against Communism worldwide. He negotiated with the Soviet's Mikhail Gorbachev which led to the INF Treaty as well as a decrease of both countries' nuclear arsenals.[4]

At the end of his two terms in office, Ronald Reagan viewed with satisfaction the achievements of his innovative program known as the Reagan Revolution, which aimed to reinvigorate the American people and reduce their reliance upon Government. He felt he had fulfilled his campaign pledge of 1980 to restore "the great, confident roar of American progress and growth and optimism."[3]

According to Paul Kengor, author of God and Ronald Reagan, Reagan had a particularly strong faith in the goodness of people, which stemmed from the optimistic faith of his mother, Nelle, and the Disciples of Christ faith he was baptized into in 1922.[4] The Reagans purchased a home in Bel Air, Los Angeles, California, after leaving office in 1989. They regularly attended Bel Air Presbyterian Church.[4]

In 1994, the former president disclosed that he had been diagnosed with Alzheimer's disease earlier in the year; he died ten years later, 05 June 2004, at the age of 93.

"Whatever else history may say about me when I’m gone, I hope it will record that I appealed to your best hopes, not your worst fears; to your confidence rather than your doubts. My dream is that you will travel the road ahead with liberty’s lamp guiding your steps and opportunity’s arm steadying your way."

"Freedom is never more than one generation away from extinction. We didn’t pass it on to our children in the bloodstream. It must be fought for, protected, and handed on for them to do the same, or one day we will spend our sunset years telling our children and our children's children what it was once like in the United States where men were free." Address to the annual meeting of the Phoenix Chamber of Commerce, (30 March 1961).

"I'm convinced that today the majority of Americans want what those first Americans wanted: A better life for themselves and their children; a minimum of government authority. Very simply, they want to be left alone in peace and safety to take care of the family by earning an honest dollar and putting away some savings. This may not sound too exciting, but there is something magnificent about it. On the farm, on the street corner, in the factory and in the kitchen, millions of us ask nothing more, but certainly nothing less than to live our own lives according to our values — at peace with ourselves, our neighbors and the world." Nationally televised address, (6 July 1976).

Sponsored Search by Ancestry.com
DNA
No known carriers of Ronald's DNA have taken a DNA test. 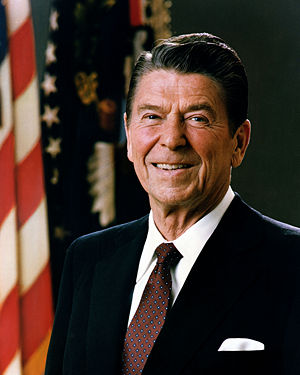 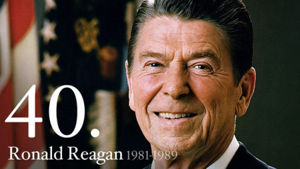 President Reagan with Nancy Reagan, Prime Minister Lee Kuan Yew of Singapore, and Mrs. Lee on the North Portico before a state dinner. 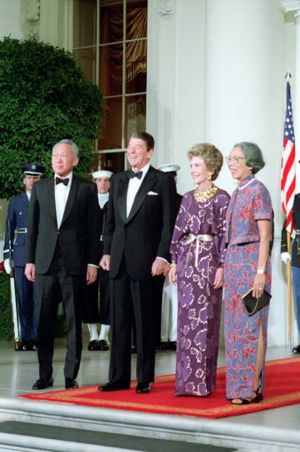 Ronald Reagan with his brother Neil 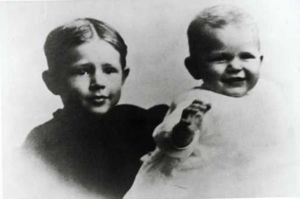 Thomas Heath
While he used and preferred "Ron" on a personal level on a public level his screen name was "Ronald Reagan" and this carried over to his political career.

'The first item on the agenda was a meeting to choose my name....I said, " May I point out that I have a lot of name recognition in a large part of the country, particularly in the Middle West, where I've been broadcasting sports. I think a lot of people would recognise my name on theatre marquees. "

One of them said, "Dutch Reagan? You can't put Dutch Reagan on a marquee."... and so I ventured inquiringly:

Pretty soon you would have thought they had thought it up.' (Reagan, Ronald, "An American Life").

Until Tuesday afternoon, when they signed a treaty eliminating the superpowers' medium-range nuclear weapons arsenals, Reagan and Gorbachev had used formal forms of address: "Mr. General Secretary" and "Mr. President."

That changed in a quiet moment after the ceremony when Reagan said to Gorbachev, "in working situations, my name is Ron."

"My name is Mikhail," Gorbachev replied.

"Maybe, in private session, we can go by first names," Reagan responded.

Robin Lee
If you do a search and use "Ron", you will get his son. That is the biggest reason we have him as Ronald, plus, most people recognize him as Ronald Reagan. A quote from him or his family where he is referred to as Ron would be appropriate.
posted Sep 04, 2018 by Robin Lee
Terry Winchester
Would it be appropriate to refer to President Reagan as "Ron" instead of "Ronald" in the biography. This is the name he introduced himself as, and likely preferred to use.
posted Sep 04, 2018 by Terry Winchester