Baldwin states that Conan first appears in contemporary records when a papal letter of John XIII names two of the Breton leaders as "Berengarius" and his son "Conatus." John XIII was pope from 965 to 972, son Conatus had been born at the time of the letter, perhaps 970. [3] Named as a "leader" in that letter, he must have already passed infancy and childhood. Therefore a birth year estimate of, say, 950, is plausible.

Some genealogies report a birth year of 927 in Brittany. [1] This would make him older than one would expect in the battles in which he fought and died.

Some genealogies report the birth of his father Judicael Berengar of Rennes, as 910 and that of his mother, Gerberge, Countess of Rennes, as between 905 and 914. [1] Both of these dates place his parents' birth earlier than appears to be true.

In 973 Conan married Ermengarde d'Anjou, daughter of Geoffroy I "Grisegonelle," Comte d'Anjou and Adela de Meaux). Cawley reports that she was born before 965 and died after 982. [4][5]

Baldwin states that Ermengarde's date and place of birth are unknown, but that chronologically, she must be a daughter of Geoffroy's first marriage to . Adèle de Troyes, daughter of Robert I, count of Troyes. [4] Richardson gives her birth range from 965 and 974[6] -- bracketing her children's births between her marriage and her death.

In about 965, Ermengarde's mother Adela married Geoffroi I Grisegonelle, Count of Anjou (958/960-987), Count of Chalon (979-987), son of Foulques II the Good, Count of Anjoy, by his wife Gerberge. [6] The chronologies of other events suggest that Ermengarde de Bretagne, daughter of Geoffroi and Adele, was born the next year, 966, and married Conan I of Rennes, born about 950, who died in 992. Cawley states that Ermengarde was presumably born before 965 if it is correct that her first child was born in 980. [5]

Sometimes Ermengarde and her sister Gerberge are conflated into one person, "Ermengarde-Gerberga" [7][8] Baldwin, however, notes that "there is no good reason to identify Geoffroy's daughters Ermengarde (wife of count Conan of Rennes) and Gerberge (wife of count Guillaume IV of Angoulême) as the same person, as is sometimes done [4]

Ermengarde married Conan I, Duke of Brittany, Prince of the Bretons, son and heir of Juhel (alias Berenger), Count of Rennes.[6] Cawley refers to him as Comte de Rennes, son of JUDICAËL BERENGAR, Comte de Rennes & his wife Gerberge. [5][8] Baldwin reports that Rodulfus Glaber states that Conan married a sister of count Foulques of Anjou. [9] The Chronicle of S. Florent says that Geoffrey was son of Conan by a sister of Foulques [10] The Angevin genealogical collection states that Judith, wife of Richard of Normandy, was the daughter of Conan by his wife Ermengarde, daughter of Geoffroy of Anjou. [11]

Some genealogies give the date of marriage as 980. [1] This appears to be a calculation from the birth of the oldest child and does not reflect the research reported above.

In 981 Conan fought a battle against Guérech, Count of Nantes, and his Angevin allies, which is called the "first" Battle of Conquereuil. [3][6]

Conan assumed the title of Duke of Brittany in the spring of 990 following his attack on Nantes and the subsequent death of Count Alan. [3] Conan succeeded in 990 as Conan I "le Tort" Duke of Brittany. [12]

Conan held the title of Duke when he gave the lands of Villamée, Lillele and Passille to Mont Saint-Michel, all of which later became part of the seigneury of Fougères, in a charter dated 28 July 990. [3][6]

As duke his rule succeeded the Regency that governed Brittany during the life of Drogo and the fractured rule of Brittany after Drogo's death by his brothers Hoël and Guerech . The fractured rule over Brittany resulted in a short vacancy in the title Duke of Brittany; Conan I had to ally himself with the Count of Blois in order to defeat Judicael Berengar before he could assume the title of Duke.

Conan's alliance with the Count of Blois had helped him defeat Judicael Berengar, he later needed to "rid himself of influence from Blois, [which he accomplished by signing] a pact with Richard I of Normandy; [this pact] established firm Breton-Norman links for the first time." Richard I had married the daughter of Hugh I the Great, and after this marriage had re-asserted his father's claim as Overlord of the Breton duchy. Conan I's pact with him strengthened that assertion but the historical documentation for that Overlordship claim remains doubtful because it largely appears only in the less than authoritative writings of Dudo of Saint-Quentin.

Conan of Rennes opposed his wife Ermengarde's father and brother Fulk even though the marriage was apparently designed to form a political alliance between Anjou and Brittany. [8]

Conan was killed in battle at the 2nd Battle of Conquereuil near Nantes 27 June 992.[6][5][2] against count his brother-in-law Fulk III Nerra, Count of Anjou [3] and his father-in-law Geoffrey I.

Conan is buried at Mont Saint-Michel Abbey in Normandy.[1]

Baldwin states that Eermengarde's date and place of death are unknown, but she died after the death of her husband Conan in 992. [4]

Even after her husband Conan had been killed by her brother Fulk at the battle of Battle of Conquereuil in 992, and during the period 992-994 when Ermengarde was Regent for their son Geoffrey, she remained loyal to her brother Fulk III, Count of Anjou. [8]

In 992, following the interests of her brother, and functioning as Regent, she accepted Capetian over-lordship for Rennes while rejecting that of Odo I, Count of Blois.[8]

Richardson states that they had four sons and one daughter. [6] Baldwin states that both Geoffroy and Judith are directly documented as Ermengarde's children.[4]

Rennes derives its name from a Celtic tribe, called the Riedones. The present site of Rennes, on the confluence of the Ille and Vilaine rivers was the political and religious seat of the tribe, spanning most of Brittany. It was conquered in 57 BCE by Julius Ceasar in his Western conquests that ended with the reprisal raid on Britain in 54 BCE. In general keeping with Roman policy, the site was Romanised, gaining the name Citivas Riedonum. The Riedones were quickly romanised, benefitting from the peace and superior development of the Romans. As the Empire weakened, and attacks from Germanic tribesmen became a reality, some of the toughest fortifications ever built in the Roman Empire were constructed. The nickname, The Red City, descends from the use of red clay brickwork for this.

As Saxon attacks battered and finally destroyed the Sub-Roman state of Britain, the population of Brittany was augmented by the fleeing refugees from across the channel, earning the region its name. Brittany then entered into a complex relationship with the Frankish kingdom, until 851AD when the bretons were strong enough to declare full independance under the Dukes of Brittany.

Rennes was besieged in 1356 by a marauding English army, in support of the de Monfort faction in the war of Succession, a bloody civil war for the title of the Duchy of Brittany. It was delivered by a French force under the knight Guesclin. The Place des Lices is the site of the engagement that forced the English to wthdraw. The war was bloody, long and ended with the nephew of the original duke in power.

Sponsored Search by Ancestry.com
DNA Connections
It may be possible to confirm family relationships with Conan I by comparing test results with other carriers of his Y-chromosome or his mother's mitochondrial DNA. Y-chromosome DNA test-takers in his direct paternal line on WikiTree: 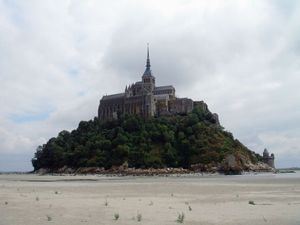 C. Mackinnon
Rennes-22 and Rennes-29 appear to represent the same person because: Suggest merging empty profile Rennes-22 in Rennes-29 (because Rennes-29 is protected)
posted Aug 25, 2018 by C. Mackinnon
Kerry Larson
This "source", http://wc.rootsweb.ancestry.com/cgi-bin/igm.cgi?op=GET&db=irisheyes&id=I13935, has nothing to do with this profile.
posted Apr 08, 2017 by Kerry Larson
Bree Ogle
Maison de Rennes-1 and Bretagne-1 appear to represent the same person because: Parents corrected. Ready to merge.
posted Mar 17, 2016 by Bree Ogle

Vic Watt
FMG has only 5 children for Conan and Ermengarde: Geoffroy, Judith, Judicael, Catuallon and Hurnod. I am going to try to find the correct families for the others and disconnect them from these parents.

Conan I is 28 degrees from Laurie Giffin, 42 degrees from Toni Morrison and 16 degrees from Henry VIII of England on our single family tree. Login to find your connection.