Like the Boston Massacre or Washington crossing the Delaware, the midnight ride of the Boston silversmith and print-maker Paul Revere has become one of the most enduring and misrepresented images of the American Revolution.

Paul Revere was born near Bridgewater, Plymouth, Massachusetts Bay Province, shortly before December 21, 1734 (his baptism date: usually within 24 hours of birth), the son of Apollos Rivoire, a French Huguenot immigrant, and Deborah Hitchbourn, daughter of an affluent merchant family of English origins, who owned one of Boston's wharfs.[1][2][3][4][5]

His French-born father, Apollos Rivoire, had Anglicized his name to "Paul Revere" a few years after immigrating to Boston in 1716. He was a silver and goldsmith and the head of a large household.[5][1] Paul Revere Jr. was the third of 12 children, and his parents' eldest surviving son.[5]

Paul Revere Jr. was educated at the North Writing School in Boston.[5] He apprenticed with his father to learn the art of gold and silversmithing.[5] Paul's father died when he was just 19, leaving him as the family's primary source of income.[5]

In 1756, during the French & Indian War, Paul volunteered to fight the French at Lake George, New York, where he was commissioned as a second lieutenant in the colonial artillery.[5]

Soon after Sarah's death, Paul married Rachel Walker, on 23 September 1773 at Boston, Suffolk, Massachusetts Bay.[2][7] They would have eight children together.[5]

Paul was a master silversmith, working in both gold and silver, but not pewter.[5][1][8]He practiced his art for over 40 years in Boston.[5] His work was as valued during his lifetime as it is today, and he was the mentor to many apprentices.[5]

In addition to his silversmith work, he created book plates for printing and worked as a dentist for a few years.[5][1][8] Contrary to popular lore, he did not produce dentures for George Washington.[5] One of Revere's most notable prints is his engraving of the Boston Massacre.[1]

In addition to his smithing, Paul ran a hardware store after the war.[5] In 1788, he opened a foundry as well, which would go on to produce brass fittings for the USS Constitution.[5] The foundry produced a bell which still rings in Boston's Kings Chapel.[5]

In 1801, Revere opened one of the first copper rolling mills in the country.[5][8][1] His copper covered the hull of the USS Constitution as well as the Massachusetts State House.[5] One of the most noted legacies of Paul's copper work is with the Revere Copper and Brass copper bottomed cookware, which would be emulated and called "Revere ware". Revereware is still produced today, although now by a different company.[5]

Paul Revere was a very active community member, contributing to numerous societies and political roles. As a member of the Masonic Lodge of St. Andrew, he associated with activists like James Otis and Dr. Joseph Warren.[5] Paul was instrumental in gathering intelligence before the Revolution officially began by "watching the Movements of British Soldiers," as he remembered in an account of his ride.[5] Paul was also a courier for the Boston Committee of Correspondence and the Massachusetts Committee of Safety, riding express to the Continental Congress in Philadelphia.[5] He spread the word of the Boston Tea Party to New York and Philadelphia.[5]

Paul Revere Jr. was a Freemason from 1760 to 1809 and held several offices in St. Andrew's and the Rising States Lodges as well as the Massachusetts Grand Lodge.[5] He was a member of the Massachusetts Charitable Mechanics Association, serving as the association's first president.[5] It was founded in 1794 as an organization of artisans and small businessmen who worked to improve work conditions and aid members in "distressed" circumstances.[5]

From Masonic Genealogy, Legality of the Massachusetts Grand Lodge:[9]

At a Convention of Delegates from the following Lodges of Ancient Free and Accepted Masons, held at at Free Masons Hall in Charlestown, Commonwealth of Massachusetts, on Thursday, 26 May, 5785.[11]
PRESENT.
Rising States Lodge.

At around ten o'clock on the 18th of April 1775, Paul would set off from Boston to carry news of the British advance toward Lexington, Massachusetts to Samuel Adams and John Hancock, having been asked by his friend, the political activist and fellow Mason Dr. Joseph Warren.[5][12] Paul was accompanied by William Dawes and Dr. Samuel Prescott.[5][12] They were detained by British troops just outside Lexington but escaped, although Paul was left without a horse and had to continue toward Concord on foot.[5]

Paul told the story many ways throughout his lifetime, but it was not until 1861 and the publication of William Wordsworth Longfellow's commemorative poem in the Atlantic Monthly, that his reputation expanded beyond local legend.[5]That poem made him a figure of lasting national prominence, a symbol of all things American, intrepid, and fleet.[5]

Revere died of natural causes on May 10, 1818 at the age of 83, leaving five children, several grandchildren and great-grandchildren.[2][5] The son of an immigrant artisan, not born to wealth or inheritance, Revere died a modestly well-to-do businessman and a popular local figure of some note, as well as maintaining his health into old age.[5]Paul Revere is buried in Boston's Granary Burying Ground.[5][13]

An obituary in the Boston Intelligence noted, "seldom has the tomb closed upon a life so honorable and useful".[5][2] It seems a rather fitting end to an incredible life.

Paul has descendants listed in Daughters of the American Revolution[14]

There are sources for a third marriage to Sally Edwards, July 25, 1782 at Boston, Suffolk, Massachusetts, but this was likely a different Paul, considering Paul remained married to Rachel until her death in 1813.[15][5]

Son Paul Revere Revere Jr is entered as having married Sally Edwards, but no sources are supplied.

DAR lists him as a Major/Lieutenant Colonel in Col. Josiah Whitney's regiment. [16]

Sponsored Search by Ancestry.com
DNA
No known carriers of Paul's DNA have taken a DNA test. 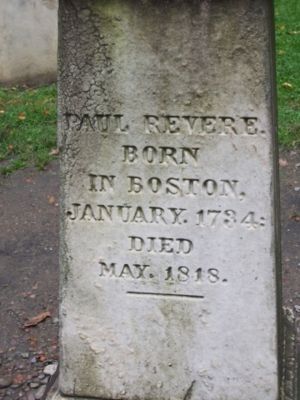 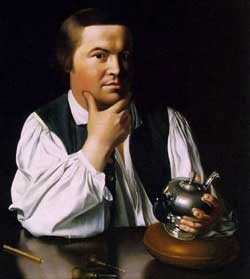 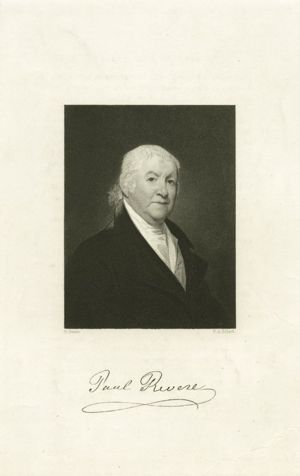 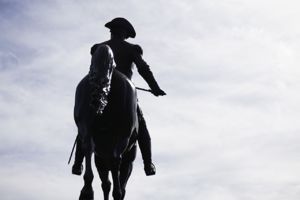 Janne (Shoults) Gorman
Here is an interesting blog about how the date of birth for Paul Revere was calculated:

It helps to explain Old Style Calendar: Before 1752 the year began on Lady Day, March 25th,. Dates between January 1st and March 24th were at the end of the year. Old Style (O.S.) and New Style (N.S.) are used to indicate whether the year has been adjusted. Often both dates are used.

posted Jul 22, 2020 by Janne (Shoults) Gorman
Mike Keough
What is the source for the born in or near Bridgewater claim? Even the photo of his grave above shows "born in Boston".
posted Apr 06, 2020 by Mike Keough
Jim Moore
I don't have a stake in this question. However, I would note that the source for the claim is cited in the profile and can be checked at AmericanAncestors.org (the NEHGS) and possibly other places.
posted Apr 06, 2020 by Jim Moore

David Wilson
Paul is also mentioned as a supplier and protector of the Castle William, Boston Harbor at the age of 77 on http://www.wikitree.com/wiki/Space:War_of_1812_Massachusetts
posted Sep 15, 2015 by David Wilson

Charlotte Shockey
Here's a little more to his tree: https://www.paulreverehouse.org/bio/father.html