Husband of Angelica Talcott (Devens) Rice — married about 1851 in Massachusetts

Alexander Hamilton Rice (August 30, 1818 – July 22, 1895) was an American politician and businessman from Massachusetts. He served as Mayor of Boston from 1856 to 1857, a U.S. Congressman during the American Civil War, and as the 30th Governor of Massachusetts from 1876–78. He was part owner and president of Rice-Kendall, one of the nation's largest paper products distributors. Educated at Union College, Rice was for many years involved in the paper business, and entered Boston politics in 1853. As mayor, he helped broker an agreement that began development of its Back Bay area. His Congressional service included the introduction of the failed Crittenden Compromise, oversight of naval affairs during the Civil War, and resistance to Radical Republican actions. As governor, he promoted social reform legislation and reductions in working hours.

Rice was married twice. In 1845, he married Augusta McKim, with whom he had three children before her death in 1868.

He had one son by his second wife, Angie Erickson Powell of Rochester, New York. Rice's uncle Charles was a brigadier general in the Massachusetts state militia and also served as a state legislator. His grandson Alexander Hamilton Rice, Jr. was a physician and explorer in South America.

ALEXANDER H. RICE, the thirty-second governor of Massachusetts, was born in Newton Lower Falls, Massachusetts on August 30, 1818. His early education was attained in the Newton public schools, and later at Union College, where he graduated in 1840. After establishing a successful paper manufacturing business in Boston, Rice entered into politics. He played a part in founding the Republican Party in Massachusetts, was the mayor of Boston from 1856 to 1857, and served as a member of the U.S. House of Representatives from 1859 to 1867. Rice won the 1875 Republican gubernatorial nomination, and then went on to win election to the Massachusetts governorship on November 2, 1875. He was reelected to a second term in 1876, and to a third term in 1877. During his tenure, two new mental hospitals were opened; the local-option liquor bill was vetoed; social welfare programs were endorsed; and discrepancies were corrected in the state almshouse. After declining to run for reelection, Rice left office on January 1, 1879, and retired from political life. He stayed active, returning to his duties in his paper business, as well as serving on several financial and educational boards. Governor Alexander H. Rice passed away on July 22, 1895, and was buried in the Newton Cemetery in Newton, Massachusetts.

posted 7 Jan 2017 by Phil Richardson   [thank Phil]
Login to add a memory.
Is Alexander your ancestor? Please don't go away! 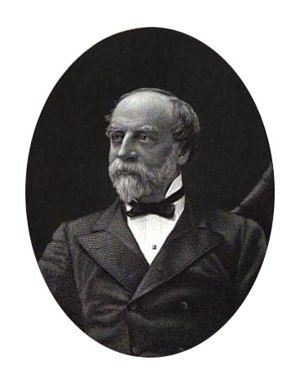