John Richards was born in Wales.

John was born in the first quarter of 1876 to Job Richards and Mary (Dyer) Richards, the middle name of Dyer comes from his mother's maiden name.

His father Job, who died while john was 13 years old, was a minister at Moriah Congregational Church in Llanedy, this obviously influenced john as he followed in his father's footsteps and after graduating as a minister from Brecon College in 1903, he took his first post at Ebenezer Welsh Independent Chapel at Trawsfynydd Merionithshire in North Wales. The Cardigan Bay Visitor of the 8th September 1903 carries an article of his Ordination the previous week. The Bard Watcyn Wyn who had formerly taught John at Ammanford took part in the ordination ceremony.

During his time as a minister, John won a number of Eisteddfod Chairs for his poetry. The following is a list of his successes (It is not complete as verification is required for the full list)

John spent fourteen years at Trawsfynydd and during this time, he met, befriended, mentored and encouraged Ellis Humphrey Evans also known as the Bard "Hedd Wyn" and famously known for winning the chair at the Birkenhead Eisteddfod in 1917. This subsequently became known as the Eisteddfod of the Black Chair because Ellis Evans "Hedd Wyn", the winner, had died at the battle for Passchendaele some weeks earlier.

A film entitled Hedd Wyn was made in 1992 and as well as winning six 1994 BAFTA awards, it was also nominated in 1994 for an Oscar. The role of Reverend John Dyer Richards was played by Derec Brown.

While at Trawsfynydd, John married Elizabeth (Bessie) Morgans of Llanelly at a ceremony at Tabernacl in Llanelly on the 28th July 1908. Following the ceremony, the couple travelled to Aberystwyth for their honeymoon. In 1914, they had a son John Morgan Dyer Richards

In December of 1917 John accepted a new posting as the minister of Moriah Welsh Independent Chapel Bedlinog Glamorgan and moved there with his family, in January of 1918, to take up the post. Following on from this, in 1922 John took a further posting and moved with his family to Nanternis near New Quay in Cardigan. He was the minister for both Maenygroes and Nanternis chapels.

John died while still at Maenygroes and Nanternis in 1927 aged 50. He is buried in the graveyard at Maenygroes. His grave, which is now difficult to read and hence locate, is the first grave on the right after entering the gate to the main cemetery site on the other side of the road to Maenygroes Chapel.

As a poet and eisteddfodwr John had the ability to mentor the young Hedd Wyn. Following his death, much of John's work, documents and manuscripts, were deposited at the National Library of Wales in Aberystwyth. In addition, two of the Eisteddfod Chairs that he won, London in 1913 and Cwmmair in 1914 are located as of June 2018 at Maenygroes chapel.

Further information about the Eisteddfod and the Chairs, in Welsh, can be found at this site http://www.cadeiriau.cymru/yr-eisteddfodwyr.html#johndyerrichards

This is a list of works by J D Richards that have been published in various newspapers and journals during his lifetime. It is by no means exhaustive and additional items will be added as they are identified.

Images: 4
Newspaper cutting for the Rev. Richards winning an Eisteddfod Chair at London in 1913 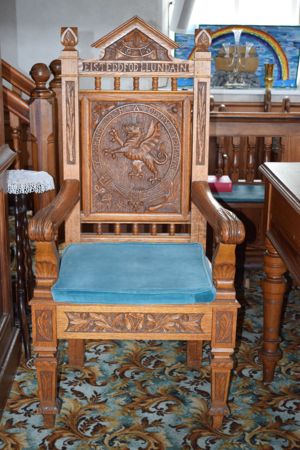 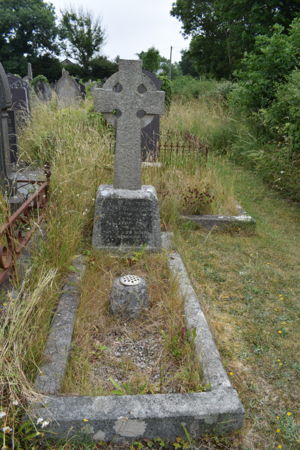 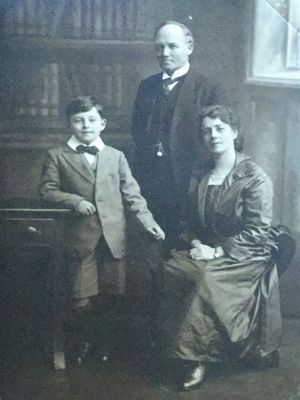