Magdalena Richards was born October 7, 1768, a daughter of John and Sarah Ellsworth. She was born in what was Augusta County, Virginia, and grew up on the frontier in Harrison County Virginia, surrounded by a large extended family, including several famous uncles. Her grandfather may have been Johannes Reicherd/Reichert, who immigrated from Rotterdam to Philadelphia PA on 27 AUG 1739, on the "Snow Bettsey", Richard Budden in command. (Source: "Pennsylvania German Pioneers: A Publication of the Original Lists of Arrivals in the Port of Philadelphia from 1727 to 1775", by Ralph Beaver Strassburger and edited by William John Hinke, originally published in 1934, (Baltimore MD: Genealogical Publishing Co.), 1966, Vols. I-II, pp. 258, 260 & 263, List 69-70 A, B & C.)

Magdalena, aka Magdalene, died June 11, 1832 at the age of 63, in Stumptown, Gilmer county, Virginia. (This part of Virginia became part of West Virginia, in 1863, at the onset of the American Civil War. Magdalene Richards Stump's grave monument gives her year of death as 1837, however, Thurman Stump's "Michael Stump Sr. of Virginia, 1709 - 1768, A Treatise on the Origin and Ancestry, With Surname Armorials" (McClain Printing Company, Parsons WV 26287: 1975), states that she died in 1832.

Is Magdalena your ancestor? Please don't go away!

ask our community of genealogists a question.
Sponsored Search by Ancestry.com
DNA Connections
It may be possible to confirm family relationships with Magdalena by comparing test results with other carriers of her mitochondrial DNA. However, there are no known mtDNA test-takers in her direct maternal line. It is likely that these autosomal DNA test-takers will share some percentage of DNA with Magdalena: 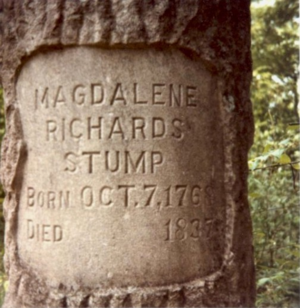 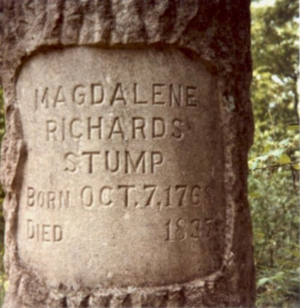