Jay was born in 1959. He was the son of Jiles Richardson and Adrianne Fryou. He passed away in 2013.

Jay Perry Richardson (1959–2013) was born two months after his father's death in April 1959. He was also a musician and was known professionally as "The Big Bopper, Jr.", performing around the world. He toured on the "Winter Dance Party" tour with Buddy Holly impersonator John Mueller on some of the same stages where his father had performed.

In January 2007 Jay Richardson requested that his father's body be exhumed and an autopsy be performed in response to an internet rumor about guns being fired aboard the aircraft and Richardson initially surviving the crash. The autopsy was performed by Dr. William M. Bass, a forensic anthropologist at the University of Tennessee, Knoxville. Richardson was present throughout the autopsy and observed the casket as it was opened; both men were surprised that the remains were well enough preserved to be recognized as those of the late rock star.

Dr. Bass's findings indicated no signs of foul play. "There are fractures from head to toe. Massive fractures…. [Richardson] died immediately. He didn't crawl away. He didn't walk away from the plane."

Richardson's body was placed in a new casket made by the same company as the original and was reburied next to his wife in Beaumont's Forest Lawn Cemetery. Jay Richardson allowed the old casket to be displayed at the Texas Musicians Museum. In December 2008 he announced that he would be placing the old casket up for auction on eBay, donating a share of the proceeds to the Texas Musicians Museum, but he downplayed the suggestion in later interviews. He died on August 24, 2013.

Is Jay your relative? Please don't go away!

ask our community of genealogists a question.
Sponsored Search by Ancestry.com
DNA Connections
It may be possible to confirm family relationships with Jay by comparing test results with other carriers of his ancestors' Y-chromosome or mitochondrial DNA. However, there are no known yDNA or mtDNA test-takers in his direct paternal or maternal line. It is likely that these autosomal DNA test-takers will share DNA with Jay: 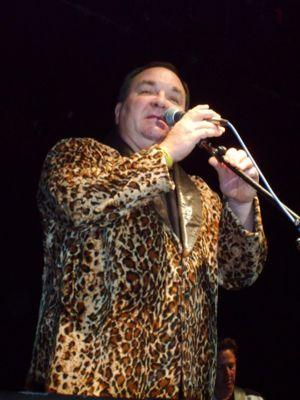