Ezekiel Richardson aka Richeson
Born about 1604 in Westmill, Hertfordshire, England

[send private message]
Profile last modified 5 Apr 2021 | Created 31 May 2009
This page has been accessed 7,896 times.
The Birth Date is a rough estimate. See the text for details.

The first American ancestor Ezekiel Richardson arrived in this country from England in 1630. He was soon followed by two brothers, Samuel and Thomas, and assisted in founding the town of Woburn, Massachusetts. [1] Ezekiel is a direct ancestor of US President Franklin Pierce.

Ezekiel Richardson was born about 1604 in Westmill, Hertfordshire, England, the son of Thomas Richardson and Katherine Duxford .[2]

Ezekiel was not baptized in Westmill with all his siblings, but he was certainly the son of Thomas and Katherine (Duxford) Richardson.[3]

Davis in Ancestry of Sarah Hildreth ... speculates that Ezekiel may have been baptized at his father's parish of Standon (where the extant parish begins in 1671). Threlfall gives a baptism date of 24 Sep 1606.[4] However, Anderson, Davis, and Watkins, agree there is no baptism for Ezekiel at Westmill.[5] The 3 Jul 1608 baptism date is that of his brother, Thomas Richardson.

Susanna’s surname is sometimes given as Bradford, but there seems to be no reason ever mentioned why it should be Bradford. Vinton is cited. He mentions only Betsey Moulton Bradford of 1830 in the Index. She does not appear on the given page (745).[6]

Ezekiel was the first and apparently the eldest of three Richardson brothers who all immigrated to Massachusetts. Ezekiel came first, and then Thomas and Samuel. Ezekiel was a planter at Roxbury.[5]

Based on when they were admitted to the Boston Church (#80 and #81, which would have been winter 1630/1), Ezekiel and Susanna probably came in the fleet of Winthrop in 1630. His brothers, Samuel and Thomas, arrived in New England by 1635. His sister Elizabeth's children Francis Wyman and John Wyman, also emigrated to New England.[8]

They were dismissed with others 1 Oct 1632 to establish a church at Charlestown.

Ezekiel was made freeman 18 May 1631; by the Court appointed 1633 constable, and by the people representative 1635, with many of his townsmen united in remonstrance against the Act of the government towards Wheelwright, in 1637, and, his heart failing him, in Nov expressed his contrition and had his name crossed over. In 1640, when a selectman, he favored settlement at Woburn.[9]

Testified under oath of the said Edward Converse and John Mousall that the above written is the last will and testament of Ezekiel Richardson and that he was of a disposing mind at the making the same. Taken 1 (4) 1648 before the court and myself.

Children of Ezekiel and Susanna:[12]

Above are the only known children of Ezekiel and Susanna. Some also include the children below, without source.

Sponsored Search by Ancestry.com
DNA
No known carriers of Ezekiel's DNA have taken a DNA test. 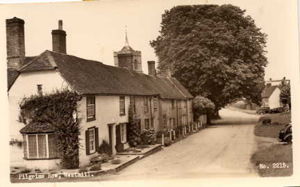 Carol Baldwin PhD RN
I added a comment with reference to Richardson-25. I must have made an error in the referencing because there is a notice about error in referencing. This is my first time to add a comment to wikitree with a reference. I apologize for any inconvenience. Reading guidelines for referencing and setting it up are still unclear to me. I don't know if I should add the reference on the right, the left or below the comment. I do know I added the correct reference. Ezekiel and Susanna are my 8th great grandparents. Their daughter, Phebe, m. Henry Baldwin.

Can you please help me to correct this. I would also like to add a photo to their profiles. It is a ship that says 'The Winthrop Fleet of 1630'. Thank you for any help you can provide. Sincerely, Carol Baldwin (Baldwin-3428) [email address removed]

Bobbie (Madison) Hall
I suggest that the two recently added children be detached from Ezekiel: Esther & Thomas are unsourced and are unlikely to be his children. Thomas was born 2 years after Ezekiel's death, and Esther was born in NH altho Ezekiel lived in Woburn.
posted Jul 17, 2016 by Bobbie (Madison) Hall

Jillaine Smith
Regarding Ezekiel's wife, his only known wife and mother of his children was Susannah. She survived him. Perhaps the "unlisted" children below belong to Mary Baldwin and her other Richardson spouse? (I'll go look for a GMB profile for Thomas.)
posted Oct 11, 2014 by Jillaine Smith

Jillaine Smith
Per Anderson (1995, p 1582), there were no such children as Hannah, Mary, Sarah, Isaac, Thomas, or Nathaniel. So those children need to be attached to the correct parents, merged away, or we need to find proof that Anderson's list was incomplete.
posted Oct 11, 2014 by Jillaine Smith

Bob Nichol
I have no particular reason to doubt your statements, David Gometz, but without sources your notions do not carry any weight. Please elaborate, with Chapter and Verse....
posted Oct 10, 2014 by Bob Nichol