He married Frances Annie Yearsley and they had three children together. He was raised and served in India, where he gained rapid promotion. He also had one daughter with Lydia Bulsowe.

Feb 1844: Enlists as Ensign, 9th Foot (East Norfolk; nicknamed The Fighting Ninth, The Holy Boys), which had been in India since 1839. Jun 1844: Sails for India to join Regiment.

Indian Mutiny â€“ 1857 - 1858 May 9th 1857: At the outbreak of the Mutiny, the 61st Regiment is on garrison duty at Ferozepore, together with a European Light Field Battery, the 45th and 57th Bengal Native Infantry and the 10th Native Light Cavalry. The native regiments join the mutiny, burning down several buildings and the Officerâ€™s Mess before deserting to join the rebels at Delhi. The 61st pursues them, and on Sep 14th takes part in the assault on the city, which falls several days later. Surgeon Reade wins the Regimentâ€™s first VC. In 1858, after the Mutiny is suppressed, the Regiment ships out for Mauritius. Christopher transfers to another regiment. Son Louis Born 1857 Daughter Frances Ann Richardson born 1861

HALF-PAY. Captain Christopher Rowland Richardson, from the 82d Foot, to be Major, without purchase. Dated 14th August 1866. May 1867: Returns to UK.

Jun 3rd 1868: Transfers to 76th Foot (Hindoostan; nicknamed The Immortals, The Pigs, The Old Seven and Sixpennies) which had been raised in India in 1787, returned there in 1865, and was then posted from Bangalore to Burma in January 1868. Sep 1868: Joins Regiment in Burma at Thayemyoo & Tonghu (Thayetmyo & Toungoo) as Major. Regiment remains there until 1870 March 1870: Regiment returns to England. 1871: Regiment transferred to India at Secunderabad (near Hyderabad). Jan 11th 1875: Medical report recommends Christopherâ€˜s return to England. He presumably ignores it. Oct 11th 1876: Promoted to Lt. Colonel. 1880: Regiment returns to England and is posted to Ireland. Oct 1876: Christopher promoted to Commanding Officer of the 76th Regiment of Foot. July 1st 1881: The 76th amalgamates with the 33rd (Duke of Wellington's Regiment), forming the 2nd Battalion of the present-day Duke of Wellington's Regiment (West Riding). Christopher remains CO of the Battallion. 10th Nov. 1887: Retires from service. Feb 6th 1900: Dies at Avon Lodge, Hillsborough Cresc., Southsea; and is buried at Highland Road Cemetery. Jan 23rd 1904: His wife Lydia dies and is buried with him.

(Christopher Rowland Richardson Jr.) got into the English army, served through the Sikh war. The Tommies called him " Black Daniel," but at one of the battles, and when the regiment got into a tight place, he is reported to have rushed to the front and called out “ Who'll follow Black Daniel? and with a roar of applause the men flew after him.

posted 11 Jul 2014 by Phil Richardson   [thank Phil]
Login to add a memory.
Is Christopher your ancestor? Please don't go away! 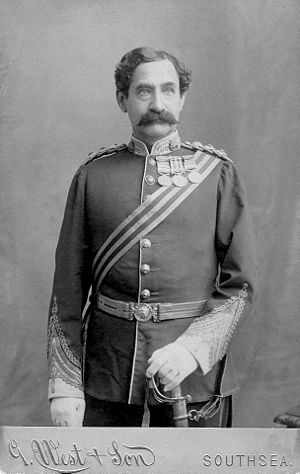 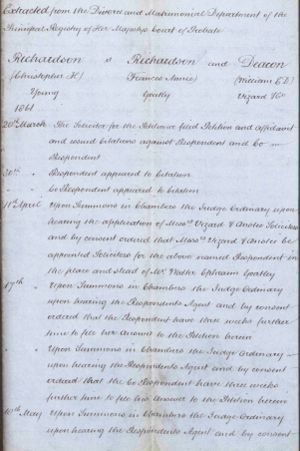 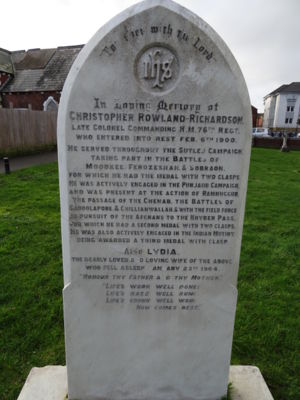 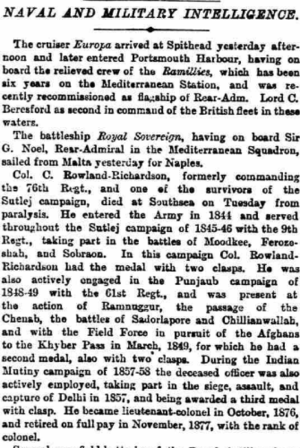