Is Simon your relative? Please don't go away!

ask our community of genealogists a question.
Sponsored Search by Ancestry.com
DNA
No known carriers of Simon's ancestors' DNA have taken a DNA test. 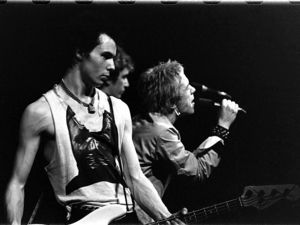 Although notable in the punk era, Sid Vicious doesn't warrant being managed by the England Project team. We are very happy to leave him to you. :)

I will remove the England Project Box and replace with the Notable sticker. If you wish to discuss this please message me.

posted Mar 19, 2019 by Jo Fitz-Henry
Bree Ogle
I think Sid and Nancy should be connected as spouses because these two can never be disconnected, no matter what kind of norm culture wants to set, and they are certainly tied in death. And let's face it ... norm is not their thing. Plus Sid's mom, and some of his friends scattered his ashes on Nancy's grave ... a decision they made after reading a note they found in his pocket about his lovers 'death pact' with Nancy.
posted Jul 01, 2018 by Bree Ogle