John Henry “Harry” was born in 1838, the second son of Admiral John and Maria Jane's four son's and seven children. In 1868 he married Annie Marian Durant but they did not have any children. He spent most of his very full and successful life in India, where he was Secretary to Sir Richard Temple, Private Secretary to Viceroy Lord Lytton, as well as holding many other distinguished posts in India. In 1894 he was appointed A.D.C. to Queen Victoria and later King Edward Vll. He retired to Switzerland, where he died in Vevey in 1923. He was a prolific writer with 52 works in 100 publications in 2 languages and with 307 library holdings. His work ranged through Bibliography, Folklore, History, Criticism and Interpretation. His best known work was "Many Memories of Life in India, at Home, and Abroad" (Edinburgh and London: William Blackwood and Sons, 1910.

The following article appeared in The Spectator in May 1923. "The death of Colonel John Henry Rivett-Carnac at Vevey (on the north bank of Lake Lausanne Switzerland) on Friday, May 11th, is a matter of especial regret to readers of the Spectator, who will remember the many letters from him that we have published. In accordance with the family tradition of the Rivetts he spent most of his life in India, where he had a very distinguished career, in both civil and military capacities. In addition to his public life in the Indian Civil Service, he had many private hobbies of a more purely intellectual nature, in any of which he would have obtained eminence had it held his somewhat over-versatile attention for longer than a few years at a time. One of the practical results of his interest in archaeology is the possession of several valuable coins by the British Museum, a gift from him. The latter part of his life, practically since his retirement, he spent in Switzerland, where he did valuable work during the War for British prisoners. His death has deprived us of one of those all too rare combinations of personal charm and practical ability." He also wrote the book - still available on Amazon - "Many Memories of life in India, at home and abroad." In 1878 he was made a Companion of the Most Eminent Order of the Indian Empire (C.I.E.) and was Aide de Camp to both her Majesty Queen Victoria and His Majesty King Edward VII.

My grandfather ‘Pop' was always rather scathing of “Lord Harry” despite his many achievements - and my father ‘Jack’ had this to say about him in his “Story”. “My Great Uncle Harry must have been quite an able individual and even for Victorian times was a most unmitigated snob. He was, according to some tales, always excusing himself as he had to go to see 'some Duke or Lord so and so'. One story told against 'Lord Harry’ as he was fondly known, was that around the 1890’s a certain confidence trickster was had up in London for fraud. It appeared that this gentleman, who called himself Rivett-Carnac had, among other things, chosen from a well know jeweller, various diamond rings and bracelets, which he had asked to be sent up to his hotel so that his wife could chose one for a birthday present. The jeweller most impressed, duly obliged, only to find that the rings, bracelets AND Mr Rivett-Carnac had disappeared without trace. Apparently the newspapers took up the the story with headlines “A Rivett-Carnac goes wrong. Member of a well-known Anglo-Indian family steals jewels etc.” Naturally Lord Harry was furious and wrote to the papers denying that the accused was a Rivett-Carnac, and eventually attended the court at which the accused was found guilty. This proved too much for ‘Lord Harry’ who stood up in court, and after emphatically denying that the man was a Rivett-Carnac ended by challenging him to say what right he had to use this distinguished name. Quite unperturbed, the accused rose and said, “My Lord, I am the illegitimate son of Sir Harry !

Great Uncle Harry did however make up a really good - if not thoroughly accurate record of the Family Tree, the authenticity of which he managed to get both Burkes and Debretts to accept.” My grandfather goes on to say that "It seems sad to have to accept Douglas’s more mundane, but certainly more accurate family Hat, than Great Uncle Harry’s sparkling Crown, even though most of the jewels have proved to be common glass.” Here, I would like to add that Douglas (who had our branch of the family decended from Blacksmiths rather than the Aristocracy of Lord Harry’s account) later added an apology in a Supplementary Note, which says in brief ”Proof that it listed the Derby family among relatives of the Brandeston Revetts has recently come to light” therefore “Elizabeth Rivett had every reason to believe herself entitled to adopt the Suffolk Rivett/Revett on behalf of her son Thomas” his negation of which had led him to the Blacksmith theory! After further research it can be reliably established that our branch of the family did indeed descend from the noble Derby Branch of the Rivett’s rather than the Blacksmith branch.

Article in The Spectator Information contained in his personal "Notes on the family of Rivett-Carnac" for private circulation in 1909. John F. Riddick, Who Was Who in British India (Westport, Connecticut, London: Greenwood Press, 1998), p. 308 World Cat Identities

Images: 1
John Henry Rivett-Carnac or "Lord Harry" as he was affectionately known 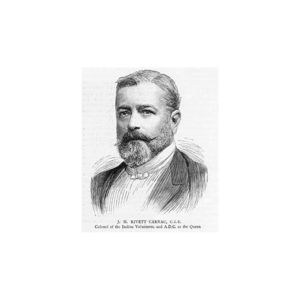 Harry is 22 degrees from Jaki Erdoes, 14 degrees from Wallis Windsor and 16 degrees from Henry VIII of England on our single family tree. Login to find your connection.