On the 6th day of July 1921, Anne Frances Robbins, was born in New York City, the only child of Kenneth Robbins, a salesman, and Edith Luckett (Robbins), an aspiring actress. Early on, Anne acquired the nickname "Nancy." Her parents divorced when she was 6 years old. Her mother sent Nancy to be raised by her aunt and uncle, Virginia and Audley Gailbraith, in Bethesda, Maryland.

In 1928, her mother married a prominent Chicago neurosurgeon, Loyal Davis. Nancy moved back in with her mother and in 1931, Loyal adopted Nancy changing her last name to Davis.

She pursued an acting career in the 1940s and 1950s. She appeared in movies such as Donovan's Brain, Night into Morning, and Hellcats of the Navy.

Sponsored Search by Ancestry.com
DNA
No known carriers of Nancy's DNA have taken a DNA test. 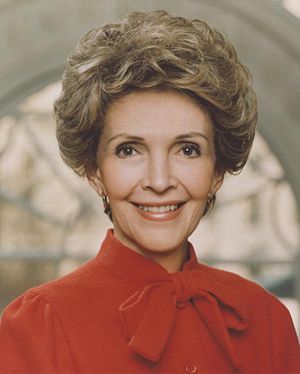 Her ancestry is explored further here

Categories: This Day In History July 06 | Spouses of US Presidents | First Ladies of the United States