George Roberts is part of a Bahamian family.

George William Kelly Roberts, born 19 July 1906 in Harbour Island, Bahamas, was the second child of George Campbell Roberts, mariner, and Nellie Maud Kelly.[1] His ancestor, John Roberts, was elected by the inhabitants of Harbour Island to a seat in the first House of Assembly of the Bahamas at the General Election held in 1729.[2]

He married Freda Genevieve Sawyer, daughter of Richard W. and Lorenza Pinder Sawyer, on January 7th 1929 at Trinity Wesleyan Church in Nassau. Their marriage certificate was witnessed by Allan Roberts and Winifred Lightbourne. At the time of the wedding he lived on Bay Street and was a merchant, and Freda Genevieve Sawyer lived on Victoria Avenue.[3] They had three sons: Richard Campbell Roberts, Gary William Kelly Roberts, and Noel Sawyer Roberts.

Mr. Roberts was in the lumber business and carried one of the largest stocks of imported lumber in the Colony.[4]He served the colony as a member of the House of Assembly from April 4th 1935 to January 13th 1955, and as a member of the Executive Council from Jun 1st, 1946 to July 22, 1954. He was a leader of the Government in House from 1949 to 1954 and president of the Legislative Council in 1954. He served as the first president of the Senate from January 7th, 1964 to June 24th, 1964.[5] George WK Roberts was made a Knight Bachelor in the 1958 New Year Honours for his public service in the Bahamas.[6]. In 1950's or early 1960's he and his family moved from their Village Road residence to "Lucky Hill," one of the most elegant home and gardens on Eastern Road, just east of Dick's Point Road.[7]

Sir George William Kelly Roberts died June 24th 1964 in Nassau, Bahamas and is buried in the Eastern Cemetery; a memorial to him is located on the grounds of the Sir George WK Roberts Library in Dunmore Town, Harbour Island, Eleuthera, Bahamas.[8]

More records on George Roberts may be available offline. Schedule a free consultation with our friends at Trace. 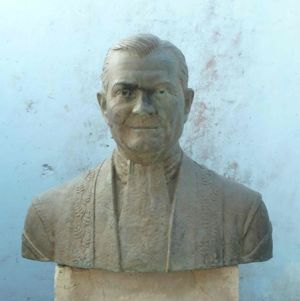 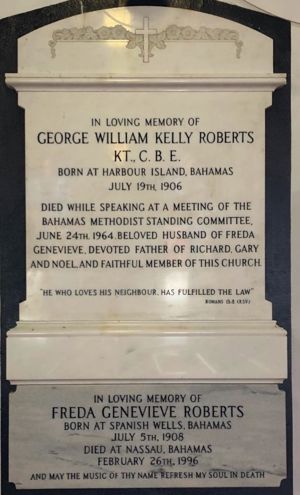 George is 20 degrees from Alice Paul, 23 degrees from Michael Schell and 19 degrees from Henry VIII of England on our single family tree. Login to find your connection.