Birth date is based on her age of 47 when she died in 1778. Her age of 47 at her death is confirmed to be seen on the Roberts memorial monument inside the St. Dunstan’s Church in Cranbrook, Kent, England.[1]

“Jane, his da. and eventually his sole h., m. 23 Oct. 1752, George (Beaucleark) 3d Duke of St. Albans, but d. s.p. Dec. 1778 and was bur. at Cranbrook. The manor of Glassenbury passed, under her will, to Thomas Roberts of the co. of Cork, her Grace being apparently under the impression that he was of her family, inasmuch as his great great grandfather, the Rev. Thomas Roberts, Chancellor of the diocese of Cork (d. 1664, aged about 74), was, in a pedigree (by Hawkins, Ulster, 22 June 1775), made identical with Thomas, 2d s. of the 1st Bart. The last mentioned Thomas, however, d. s.p. in 1644. Had such descent been proved, it would have carried with it the Baronetcy of 1611 and the right to the Coat of Arms borne by those Baronets. That pedigree, however, was rejected by the Heralds' College, a new Coat of Arms was granted to him, and the Grantee was cr. a Bart. 20 Sep. 1809, he being described as "of Glassenbury, co. Kent and Brightfieldson, co. Cork."”[2] 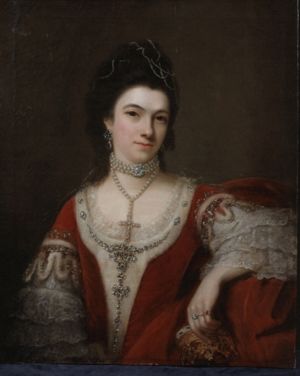