Mary West is not Mary Guider

Mary Matilda was born in Warren, Indiana. There is confusion about her birthdate but it seems to be on the 14 Sep 1856.

Mary was married three times and had six sons and eight daughters. She died on 17 Jun 1901 in San Francisco. WHAT?

The most current research points to her birth to a Catherine Brown and Mr,. Roberson. This is highly speculative and based on the fact that Jeanne Mendes a descendant, referred to her as Grandma Purple, see research notes below.

This is no longer speculative. DNA links have been established to Mary Matilda's half brother, Lewis Grant Purple.

If this is true, Mary was living in Attica, Indiana in 1860.

In 1861 the civil war began, Indiana sided with the North for this war.

In 1865, her half brother Lewis Purple was born.

In 1870 there are two census records which may be our Mary Robertson. First there is a Sarah Robison living in Warren. Warren, Indiana.

After the birth of their daughter, Catherine, in February of 1885 the Guiders picked up and moved to San Francisco, California. Unfortunately, things would not work out well for the family.

Though blessed by my great grandmother Zua's birth on January 30, 1887, the following day, the family lost a son Charlie and five days later, Bessie died as well, 8 days before her younger sister, Catherine, also passed.

I have yet to locate the cause of death, for the children in 1887 but it must have been some outbreak since it affected the three children. Rebecca Johnston says that it was possibly Diphtheria, which in 1887 was endemic to California and where San Francisco, in particular, the greatest number of deaths occurred. The most casualties, being from November to January, averaging 38 individuals per month.

Diphtheria is a disease associated with the poor, over crowded populations of large cities especially in the winter months.

Mary died of acute hepatitis caused by an abscess of the liver.

I do not know the name of the original cemetery she was buried in, but was moved to a new location at Olivet Memorial Park in Colma, where she is interred in an unmarked grave with her three children who died in 1887, and her son Hallich who died in 1960.

Jeanne Mendes gave me some photos of Mary. As she was talking about the photo she said, this is Grandma Purple. I asked her why purple, and she said maybe she wore purple all of the time.
In the 1870 census, in the county where her first husband lived, there is a family with the last name Purple and a 15 year old daughter named Sarah Robison.
In the 1860 census there was a woman named Catharine Roberson and a 5 year old daughter named Mary M.

This appears to be Mary and her mother.

The marriage of the son, Lewis Purple, referred to his parents as Catharine Brown and James Purple. That gives me the maiden name for her mother hopefully.

Yes, three members of my family, my sister Eunice Bukzin; my maternal aunt, Jane Prescott and my 3rd cousin E Moore Stewart, all have Mary Matilda Robertson as a "New Ancestor Discovery " which means she is potentially an ancestor or relative, according to Ancestry's description. The common ancestors between the Prescotts (my line) and the Stewarts are Patrick Prescott and Diana Ware. They had several children. My line descends from Patrick (Jr) and the Stewart's line descend from their son William Marshall. So Mary Matilda Robertson must somehow be related to to either Patrick (Sr) b. 1837 or his wife Diana Ware.

Best lead so far is W. Lewis who matches Jeff, Jeanne, Vicki and Angela. All descendants of different children of Mary's. W. Lewis' great great grandmother was a Maggie Robertson.

Testers who match the descendants of Mary Matilda/James Guider are:

According to his marriage registration to Emma, he has been married once before.

George's descendents have DNA tested and match descendents of Mary Matilda from both of her marriages.

This seems to indicate Mary's family and Georges's family should intersect at some point.

George's photo was passed down to the descendents of Mary Matilda and on the back was written cousin George.

mtDNA descendents of Mary Matilda are an exact mtDNA match to Rebecca Raburn Stroud who has been researched extensively by the administrator of the test for the illegitimate daughter.

Redlons from Maine match all of Mary's descendents. On the 1900 Census Mary's father is listed as being from Maine.

I am looking for information on Mary Matilda Robertson, born in Indiana Sept. 1845. She married James Guider also from
Indiana. If anyone has any information on either one of these names please contact me by e-mail.
Thank you,
Vicki
The birth information does not match the information on the Interment Record for Mary M. Guider.
It states she died on June 17th 1901 at the age of 45 years 8 months and 3 days. That would be around September 14th 1856.
Maybe it was a typo and was supposed to be 54 years 8 months and3days. That would be 1846....
From Vicki Willis email 8/14/00
Now on to what I know about the g-grandmother. The 1900 census taken from Soundex index gives Mary's birthday as Sept. 1845 and James' as Jan. 1849. I know that doesn't correspond to the records from the cemetery but it might have gotten confused during the transfer. My sister and I were told when we visited the cemetery that her body was transferred from another cemetery when the original one was terminated. Along with her is the three additional children she had who died in 1886. You see we found out that not only did she give birth to Zua, James, Jr., Opal, Richard Lee, and Hallie, she also had Charlie, Katheryn and Bessie. Unfortunately, the three all died within the same week of January 1886. Their bodies were also transported to Olivet Memorial Cemetery and buried with her body. Her son, Hallie, is buried there but a different plot (incorrect according to the groundskeeper in 2014.. they are all in the same plot - LHM) , he died July 26,1960. My grandmother, Opal, is buried there with my grandfather, she died March of 1976. In addition, her brother who is named, Jesse James, not James Jesse, is buried there with his wife, Irene (incorrect he is buried in another cemetery). He died July 18, 1960 and his wife was buried, Sept. 19, 1940.

Living with the Phillips family.

Mary Matilda is not the daughter of William Robertson and Hanna Shoemaker. I am guilty of the genesis of this error. I had added it to my ancestry tree as speculation, but it was copied as fact and now appears on many trees. I have removed it from my tree and have attempted to nip the error but it continues to propogate. 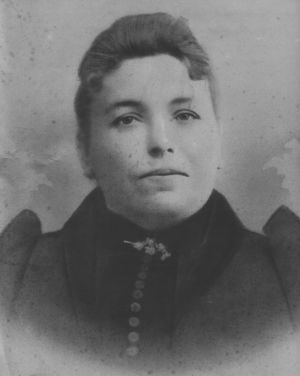 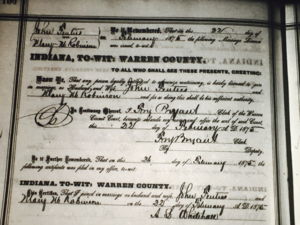 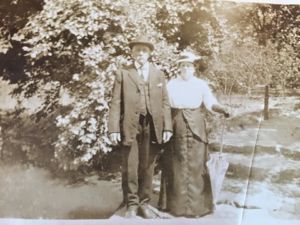