His parents were married at the time of his birth, but only since January 1758. It means he was conceived before their marriage[1][3].

Maximilien was the eldest of four children, his siblings were:

Maximilien's mother passed away in July 1764 after giving birth to a stillborn son [7]. In grief from his wife's death, Maximilien Sr. abandoned the children. Maximilien and his siblings were taken in by their maternal grandparents and his paternal aunts [2]. Maximilien entered into the college of Arras. There he excelled as a student [8]. Maximilen went on to attend the college of Louis-le-Grand in Paris. He distinguished himself there as an excellent student.[9].

He was admitted a lawyer at Arras (as his father was) in 1781. He initially was too poor to rent an office and so worked out of his uncle's house. His patron, Mgr. de Conzié, appointed him criminal judge of the diocese of Arras in March 1782. He soon resigned, having moral issues with sentencing criminals to death[9][2].

The question of elections first attracted Robespierre to political life. In 1788, he published an "Adresse à la nation artésienne" in which he argued it would be quite ridiculous to allow the Estates of Artois to elect the duties for that province to the States-General. His opposition was so successful that he was himself elected the fourteenth elector for the city of Arras and secured his election to the States-General. He had a timidity and nervousness that were so marked that every contemporary who has described him has dwelt on the subject, but his convictions were earnest, which leant weight to his arguments. [9]

In 1790, He became an important leader of the assembly and a recognized leader of the Jacobin Club. As a frequent speaker in the Constituent assembly, he voiced many ideas in support of the Declaration of the Rights of Man and Constitutional Provisions. During this period, Robespierre coined the famous motto "Liberté, Égalité, Fraternité" (Freedom, Equality, Brotherhood) [3] [10].

Louis XVI's indecision on revolutionary demands caused the forcible transfer of the family from Versailles to Paris in 1789 after Versailles had been attacked by an angry mob. On June 21, 1791, King Louis XVI and his family attempted to flee Paris to Varennes to establish a counter-revolutionary force and provide the king with greater freedom of action and personal security. The royal family were thwarted with their escape attempt and returned to Tuileries Palace in Paris. It was argued that the king should return to power if he agreed to the constitution. However, various factions disagreed, including Robespierre and the Jacobins, which led to a protest at the Champ de Mars. However, the protest turned violent, leading to the Champ de Mars massacre [11]. In August 1792, the people rose up against the King Louis XVI. Robespierre was elected to head the Paris delegation to the new National Convention. In December, he successfully argued for the execution of the king [12].

Robespierre was elected to the Committee of Public Safety on July 27, 1793. In September of that year, the Revolutionary government instituted what is called a Reign of Terror. 300,000 suspected enemies of the revolution were arrested and 17,000 executed over the course of the next 11 months. During this time, Robespierre and his allies was able to eliminate many of his political opponents. The responsibility of Robespierre about the repression in the Vendée insurrection or in the federalists insurrections is still questioned by historians as Albert Mathiez or Jean-Clément Martin.

The Committee of Public Safety continued to encourage more purges and executions. However, members of the Committee began to question Robespierre by summer of 1794, since the country was no longer threatened by outside enemies. A coalition was formed to oppose Robespierre[12].

The 27th of July 1794, Robespierre was arrested and taken to prison. He was able to escape and hid in Hotel de Ville in Paris. Troops stormed the building and arrested Robespierre. Robespierre was severely injured in the jaw by a bullet. It's not clear if it was an attempt of suicide or if it's the gendarme Charles-André Merda who shot him. He was executed at the guillotine without judgement the next day[12][13] [14]. 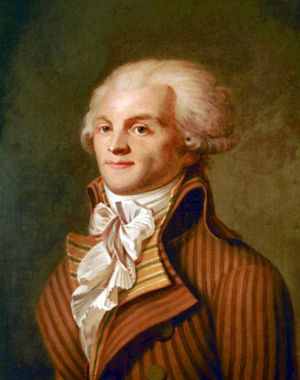 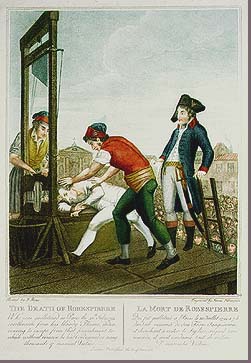