Final Rites Held October 15 For Bryon Robinson Funeral services were held for Bryon Robinson last Friday morning, Oct. 15, at 8:30 o'clock from the Smith Funeral Home in Flatonia, with continuing services at Sacred Heart Catholic Church. Robinson lost his life early Wednesday morning, Oct. 13, in the crash of a truck he was driving, near Bryan. He had reached the age of 35 years, 10 months, and four days.

The pastor, Rev. Victor A. Raska, officiated at the interment in the Praha Catholic Cemetery. He also recited the Rosary on the preceding night at 8 o'clock.

Serving as pallbearers were: Daniel Freytag, Max Freytag, Victor Zouzalik, E.H. Zouzalik, J.L. Etlinger, Walter Wotipka Jr., all members of the Flatonia Knights of Columbus, of which the deceased was former Grand Knight. Other Knights of Columbus also attended the services and assisted the family with arrangements.

As had been requested by the deceased, the pumper truck of the Flatonia Volunteer Fire Department escorted the body in the procession. Members of the Fire Department who took part were W.W. Mueller, Abe Mueller, Frank Prihoda, Paul Beale, Rudy Pavlas, T.J. Marik, Frank Zouzalik, Edward Stoner, E.J. Rollig, Arnold Wiedemann, Christian Barta, J.J. Pechacek, Harry Otto, and Walter Fisbeck. Bryon had been a member of the Department since 1939.

Bryon James Robinson was born Dec. 9, 1918, in Flatonia, the son of Boe Robinson and the late Mrs. Robinson (nee Eugenia Gertrude Gray). His mother passed away in 1937. He attended school in Flatonia, and graduated from Flatonia High School in 1937. Bryon was an outstanding athlete while in high school and maintained his interest in all sports up until the time of his passing.

He was married to Leonita Pavlas in the Flatonia Catholic Rectory on Oct. 14, 1940, with Rev. Joseph Pustka officiating. The couple had since made Flatonia their home, engaging in dairy farming.

Robinson entered the U.S. Navy April 9, 1944, and was discharged Dec. 30, 1945, serving most of the time in the South Pacific. He received wounds while engaged in active duty on Leyte in the Philippines, for which he was awarded the Purple Heart. Other awards received were: Unit Citation Bar, the Bronze Star Medal with six battle stars, four victory ribbons. He was a member of the local Sacred Heart Catholic Church.

The large crowd present for the final rites was evidence of the esteem in which he was held throughout this entire section.

Is Bryon your relative? Please don't go away!

ask our community of genealogists a question.
Sponsored Search by Ancestry.com
DNA Connections
It may be possible to confirm family relationships with Bryon by comparing test results with other carriers of his Y-chromosome or his mother's mitochondrial DNA. However, there are no known yDNA or mtDNA test-takers in his direct paternal or maternal line. It is likely that these autosomal DNA test-takers will share some percentage of DNA with Bryon: 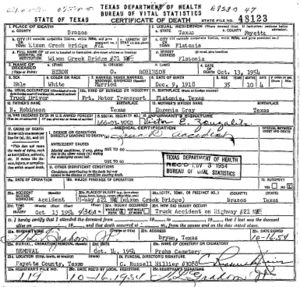 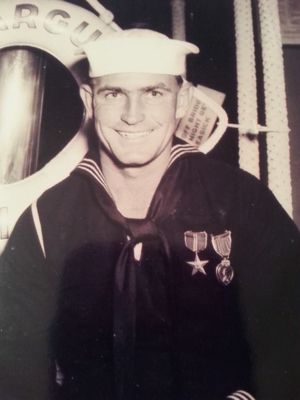