Joseph Rogers[1] was born in Watford, Northamptonshire, England,[1]and was baptized there on January 23, 1602/3.[2][1] He came as a teenager with his father Thomas to Plymouth on the Mayflower in 1620 and was cared for by Governor Bradford after his father's death in the winter of 1620-21.[3]

On the 1627 cattle division list Joseph appears with Gov. William Bradford,[4] with whom he may have lived after having been orphaned. In 1633, he was made a freeman and was taxed 25 March 1633, just before his first child was born.[1] This same date his brother John (who had arrived from England) also paid tax.[5] Joseph was in Duxbury early and on March 2, 1636, he was permitted to operate a ferry across the Jones River;[6] he was granted thirty acres of land 5 November 1638; and he was appointed constable at Duxbury on March 3, 1639.[1] Joseph Rogers and John Rogers “his brother” were granted fifty acres each at North River (Marshfield), on April 6, 1640.[7] [8] Joseph removed to Eastham and was made lieutenant to exercise the men in arms in Nausett (later Eastham) in June 1647.[9] He was a selectman at Eastham in 1670. He sold a piece of land there on 31 January 1672, but there is no mention of a wife in any of his deeds.[1]

His descendants erected a memorial at Cove Burying Ground, Eastham [11]

Will of Joseph Rogers

I, Joseph Rogers senir; of Eastham of Good Understanding and prfect memory being weake in body; and not knowing the the day of my departure out of this life, doe thinke meet to Leave this as my Last will and Testament.
Impr: I Comend my soule to God that Gave it; whoe is my God, and father in Jesus Christ, and my body to the earth by decent buriall;
firstly And Concerning my temporall estate that God hath posessed me off; I doe make my son Thomas Rogers whole and sole executor which I will should be disposed of as followeth;
Impr I doe Give unto my Loveing son James Rogers and his heires Lawfully begotten of his body: or the next of kinn; my house and housing and Land with ffences or the like appurtenances, that I now dwell in and Improve adjoyning to my house be it more or lesse; as it is Recorded & bounded on the Towne book, I say I doe Give it to him and to his heires Lawfully begotten of his body forever or the Next kinred;
Item I doe give To my sonnes John and James Rogers all my meadow Ground that I bought of the Indians ffrancis and Josiah, Lying att Pottammacutt and therabouts; I say I doe give and will it to them and theire heires forever equally to be devided
Item I do Give to my sonnes Thomas and John Rogers and theire heires all my meadow and sedge lying on the otherside of the Cove, on keeskagansett syde; I say I doe Give it to them and theire heires Lawfully begotten of theire bodys forever;
I doe Give to my Daughter Elizabeth higgens the wife of Johathan higgens six acrees of Land lying Neare the Barly necke, by the swamp Called Ceader swamp; as it is Recorded and bounded in the Towne book, I say I give this six acrees To her and her heires of her body for ever; shee nor they shall not sell hier farm it out, directly nor Indirectly to any prson whatsoever, except in Case of Removal it shalbe lawfull for my sonnes or their heires to buy or purchase it;
Item I Give to Benjah higgens my Grandchild on Condition hee live with mee untill I die; I say I Give to him and his heires, one third prte of all my upland and meddow att Paomett, purchased and unpurchased
Item It is my will That the Remainder of my lands or marshes, both att the barly necke, Pochett Iland Paomett Billingsgate or elswher purchased or unparchased not disposed of prticularly in my will; I say it is my will that all those lands be equally devided betwixt my three sonnes Thomas John and James Rogers; and the heires lawfully of theire bodyes for ever; Noteing that my son Thomas his twenty acrees of upland that already hee hath in the barly necke be prte of his devision of my land in the barly Necke;
Item I doe Give unto my daughter Hannah Rogers, if shee be not disposed of in Marriage before my decease, and my wifes deceasse, then I say I doe Give to her my bed and beding with all the furniture therto belonging or that shall belonge therto att our decease;
Alsoe it is my will that shee shall have her Choise of one Cow before my Cattle be distributed, and the use of three acrees of Tillage Ground; ffenced in, with the arable Ground of her bretheren in the barly necke if shee desire, it soe longe as shee lives unmarryed;
Item it is my will tha Benjah higgens shall have one of my Cowes after mine and my wifes decease
Item it is my will Concerning my Loveing wife hannah Rogers that shee live in My house as longe as shee lives, and shalbe Comfortably maintained by my stocke and to have the use of all my househoud stuffe, That shee Needs as longs as shee lives for her Comfort and that none of my household furniture of stocke be disposed of, as longe as shee lives, save onely hannahs Cowe
Item I will that ten shillings of my estate be disposed off for the Use of the Church of Christ in Eastham as shalbe Judged most Nessesarie
Item I will that the Remainder of my Stocke estate houshold furniture that my wife shall Leave att her decease Not disposed of in my will before written; be equally devided between all my Children; and Benjah higgins to have an equall share with each of them; This is my Last will and Testament as witnes my hand and seale this 2cond of January 1677,
Witnes Joseph Rogers and A seale
Signed and sealed in
the prsence of us
William Twining
John Banges made oath to this Will att the Court holden att Plymouth the 5th of March Anno Dom 1677:78[12][10]

Joseph Rogers had a wife, Hannah (see Research Notes) and had seven children that lived to adulthood:[13]

Sponsored Search by Ancestry.com
DNA
No known carriers of Joseph's DNA have taken a DNA test. 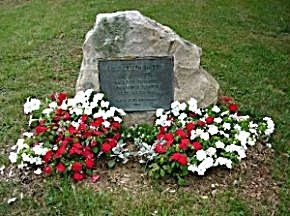 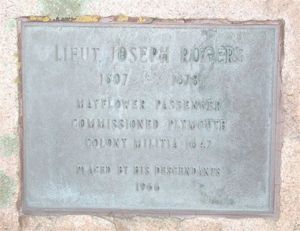 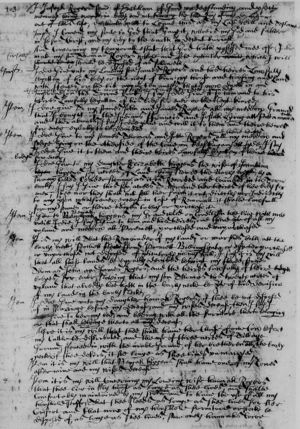 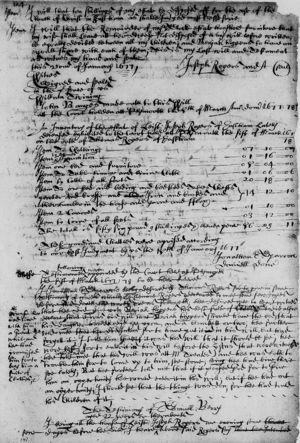 Anne B
Profile managers and members of the trusted list,

Bobbie (Madison) Hall
Does anyone have the appropriate reference (Volume & page) for Cutter? I've dug through the change log, and it never has been given. [Edit:] I've found his entry in Vol. 2:776, but there it makes no mention of the facts asserted regarding the cattle division or his living with Wm. Bradford or a specific date in 1633 for freemanship.
posted Jan 09, 2019 by Bobbie (Madison) Hall