Sons: Joseph Rogers-12 and Thomas Rogers-16. Thomas Rogers is often confused with Thomas Rogers of Duxbury, and the latter's relatives are merged in. Please check for the correct Rogers before attempting a merge.

Thomas Rogers was born at Watford, Northamptonshire, England by about 1571 (estimated from his marriage date). He was the son of William Rogers and Eleanor. He married Alice Cosford, daughter of George Cosford, in Watford, Northamptonshire on October 24, 1597.[1] Several baptisms of their children are recorded at Watford, including a Thomas, who died in infancy and a Richard, possibly their child,[2] who also died in infancy, and also Joseph, John, Elizabeth and Margaret.[2]

Thomas left Northampton County, England, about 1616 and traveled to Holland. He settled with his family in Leiden, Holland, and on 25 June 1618 he became a citizen there, vouched for by William Jepson, formerly of Worksop, Notts., and by Roger Wilson, formerly of Sandwich, co. Kent, England. Thomas was a businessman and a merchant, not a pilgrim. Thomas Rogers was called a Camlet-merchant, a grade of wool cloth used for cloaks and petticoats. He knew many of the separatists in Holland and decided to go with them to America. On 1 April 1620 Thomas sold his Leiden house on the Barbarasteeg for 300 guilders, in preparation for the journey to New England.[3][4]

His third (or second) and oldest surviving son Joseph came with him on the Mayflower trip.[5] His wife Alice, two daughters Elizabeth and Margaret, and son John remained in Leiden. In the 1622 poll tax for Leyden, in the Over "t Hoff Quarter, in a house with other Pilgrim families in St. Peter's Churchyard west-side, were Jan Thomas, orphan from England without means; Elsgen Rogiers, widow of Thonis Rogiers, an Englishwoman; and Lysbeth and Grietgen her children, poor people. Translated this could read John, son of Thomas; Alice Rogers, widow of Thomas; and Elizabeth and Margaret, her children. At that period the word orphan meant that either or both parents were dead.[6]

As passengers on the Mayflower, Thomas and son Joseph, sailed out of England on August 5, 1620 with 100 other passengers. They arrived November 11, 1620 at what would be called Cape Cod. They had been 66 days at sea.

Thomas was the 18th signer of the Mayflower Compact on Nov. 11, 1620, out of a total of 41 signers.[7] The Compact served as the first form of government in the colony.

On Dec. 16, 1620, they came ashore at Plymouth after spending time to search for a suitable area. It had cleared land and fresh water. Construction of shelter started on Dec. 23rd. Two early fires in the colony destroyed several structures, which slowed progress.

Many original Mayflower passengers died that first winter. There were about 40 deaths, including Thomas Rogers. He died sometime between Dec. to Feb. 1620-1621 "in the first sickness"[8] in the Plymouth Colony. He was about 49 years of age. Thomas was buried on Cole's Hill. Left behind without family was his son Joseph, age 18. He had to stay with other families.

In the 1623 Plymouth Colony land division, Joseph Rogers was allotted two acres--one for himself and one on behalf of his late father. He may have been living in the household of Governor Bradford with whom he was grouped on May 22, 1627, in the division of cattle. Joseph and twelve other inhabitants of Plymouth received "an heyfer of the last year which was of the Great white-back cow that was brought over in the Ann and two shee goats."[9]

John Rogers is known to have come to America and married, but unfortunately the later whereabouts of Elizabeth and Margaret remain undocumented.[10] The widow, the son John and the daughters do not appear in the land division of 1623 or the cattle division of 1627, so it is thought that they came to Plymouth Colony perhaps in 1629 or 1630 with the last of the Leiden group.[11] Governor Bradford says in his history of the Plymouth settlement that on board the Mayflower were "Thomas Rogers and Joseph his son; his other children came afterwards......Thomas Rogers died in the first sickness but his son Joseph is still living (1650) and is married and hath six children. The rest of Thomas Rogers' [children] came over and are married and have many children." On the face of it this suggests that the entire Rogers family eventually arrived in the Plymouth colony, but at least more than one additional person came after 1620. We know that his son John came to Plymouth about 1630. Although many other male Rogers immigrants have been claimed as sons of Thomas the Pilgrim, none of the claims has been proved and some have been disproved. Therefore it seems likely that at least one of the Rogers daughters who were living in Holland in 1622 came over. John and Joseph Rogers each named a daughter Elizabeth, perhaps thereby indicating that their sister Elizabeth lived in New England. Unfortunately extensive research has failed to uncover any further evidence. Some traditional genealogies identify Elizabeth with the Elizabeth who married Robert Rodway July 1635 in Watford, England, and suppose that she returned to England rather than coming to America with the rest of her family. Other genealogies suppose her to have married Samuel Eddy in Massachusetts.

John Rogers came to Plymouth about 1630, when the last of the Leiden contingent arrived and was in Plymouth Colony on March 25, 1633 when he was taxed 9 shillings. The proof of his identity lies in a grant made April 6, 1640 to "Joseph Rogers and John Rogers his brother...fifty acres apeece of upland....at the North River."[12] Both then had growing families to carry forward the Rogers heritage, although only Joseph's descendants would carry forward the Rogers name beyond the fourth generation.

It was Thomas Rogers' descendants who helped build the new colony.

Further information on the Rogers family and their English background is in "The English Ancestry of the Pilgrim Thomas Rogers and his wife Alice (Cosford) Rogers", by Clifford Stott, The Genealogist, Vol. 10, No. 2, 1989. (On line at: Thomas Rogers Society website)

All baptized at Watford, Northamptonshire:[2] 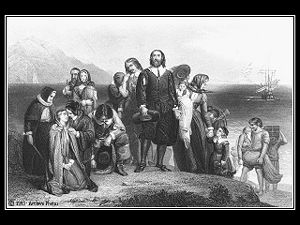 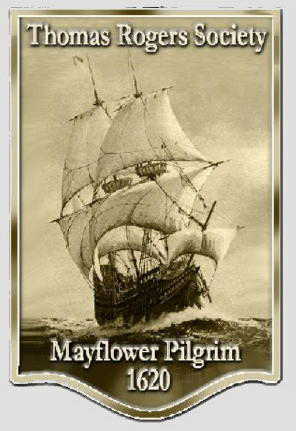 Mike Dobson
Elsgen should probably be rendered as Alice widow of Thomas. According to the Wikipedia entry for him another Alice in Leiden, Alice (Carpenter) Southworth, wife of Edward Southworth went by Elsgen while in Leiden. There is also no evidence that Alice died and he married an Elizabeth. Alice is supposed to have died shortly after the poll tax was taken in 1622 where she was listed as Elsgen.

The Conflation comment about Grace Ravens under Research notes belongs with a different Thomas Rogers and should either be removed or edited for greater clarity as to why it is here.

Anne B
Thanks Mike, for catching the Elsgen/Elizabeth. It was actually the error of the original author. The other is probably a hangover that didn't get removed. I'm fixing both.
posted Jan 15, 2021 by Anne B

Robin Lee
Rogers-29901 and Rogers-171 appear to represent the same person because: same dates and son appears to be a duplicate, also
posted Nov 15, 2020 by Robin Lee

K C
Rogers-7020 and Rogers-171 appear to represent the same person because: Thomas Rogers appears to be same as Thomas Rogers. Original gedc. uploaded 2013 based on erroneous 2008 data, was conflated, has since been sorted out w approval of PM. Merge requested.
posted Jun 06, 2020 by K C

K C
Rogers-144 and Rogers-29901 do not represent the same person because: Different birth date. No sources. Unsourced child Joseph.

Interestingly, a possible match for this son may be [Joseph Rogers] which would indicate a different Rogers line.

Anne B
Profile managers and members of the trusted list,

Anne B
The Mayflower Project is going to do some updates. The checklist is to aid that effort and will be removed when the tasks are completed.
posted Apr 12, 2019 by Anne B

Timothy Wilder
History of the Plymouth Plantation 1620-1647 by William Bradford is cited in the notes, but the title of the work itself is not listed and should be in the bibliography. http://xroads.virginia.edu/~public/bradford/brad.html http://www.gutenberg.org/files/24950/24950-h/24950-h.htm [533]
posted Dec 14, 2016 by Timothy Wilder
Laura (Pickering) Pickering-Polstra
Rogers-15598 and Rogers-171 are not ready to be merged because: Dates are not the same. Are you sure this is the same guy?
posted Aug 14, 2016 by Laura (Pickering) Pickering-Polstra
Peggy Shackelford
Rogers-15598 and Rogers-171 appear to represent the same person because: I added this, not realizing that he already existed.
posted Aug 13, 2016 by Peggy Shackelford
Samantha Rogers
Rogers-10843 appears to be a duplicate.
posted Oct 26, 2015 by Samantha Rogers