Roh was born into a poor farming family on 1 September 1946, in Bongha Village near Gimhae and Busan, in southeastern South Korea. His parents had three boys and two girls, and Roh was the youngest of his family. In 1953, he entered Dae Chang Elementary School. He received high grades, but was quite often absent from school to assist his parents. While in sixth grade, with the encouragement of his school teacher, he became the president of the school. As he entered Jin-yeong middle school, a writing contest was held to commemorate Syngman Rhee's birthday. Roh tried to start a student movement against it, but was caught and suspended from the school.

Is Moo-hyun your relative? Please don't go away!

ask our community of genealogists a question.
Sponsored Search by Ancestry.com
DNA
No known carriers of Moo-hyun's ancestors' DNA have taken a DNA test. 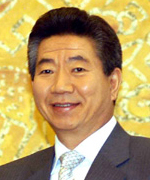