Father of Jane (Rolfe) Bolling
Died before 23 Apr 1681 at about age 66 in James City County, Colony of Virginia

NOTE: Rolfe is a very popular family at WikiTree. However, there is only one Thomas Rolfe. He only had one daughter: Jane Rolfe.

Thomas Rolfe is a descendant of Pocahontas. Here is the trail.

Thomas Rolfe is a Qualifying Ancestor of the Jamestowne Society

Thomas Rolfe[1] was born 30 January 1615 at either Smith's Plantation, Virginia or Varina, Henrico, Virginia.[citation needed] He was the only child of John and Rebecca (Pocahontas) Rolfe.[2]

A possible unproven legend states that Mattaponi oral history is adamant that Thomas was born out of wedlock, prior to the marriage ceremony between Pocahontas and Rolfe.[3]

When his mother died in England in 1617, he was left there to be raised by his father's family. He then returned to Virginia to claim his parents' property upon his majority.

Thomas became a lieutenant in the English Army.[citation needed] He came to America when he was about 25 years old (c. 1635).[4]

He married Jane Poythress about 1640 in Richmond, Henrico, Virginia or in 1644 Jamestown, James City, Virginia.[citation needed] See "Research Notes" below, however, for discussion of this claim.

They only had one child :

Some claim he married Elizabeth Washington in England.[citation needed]

Moore and Slatten[8] traced the suggestion that his wife was a Poythress back to a comment by W. G. Stanard in "Abstracts of Virginia Land Patents", in Virginia Historical Magazine (I, 1894, 446-447):

"His wife is said to have been a Miss Poythress (if so, doubtless a daughter of Francis Poythress."

According to Moore and Slatten, Stanard cited as evidence handwritten notes on the flyleaf of a copy of A Complete Collection of All the Laws of Virginia Now in Force Carefully Copied from the Assembled Records (London, 168[?], now in the Library of Virginia. Moore and Slatten state:

"Interestingly, Thomas Rolfe here is recorded as married to a 'Miss Payers'. We recall that in John Rolfe's will the name of his third wife is spelt Pyers (Peirce) and that it was John who married a "Jane".

Here again a Bolling descendant confused the son with his father. Not recognizing the name 'Payers' as another variant of Peirce, someone searched the records for a name beginning with 'P' and having a 'y' in the first syllable. Francis Poythress lived in adjacent Charles City County and his name ended in s!

"I adopt "Jane Poythress" (not "Poyers") whom he is stated in the Bolling Memoirs to have married in England."

He added in justification of his charming adoption of an ancestress, '...no such name as "Poyers" is anywhere known ... the family of Poythress was already settled in Virginia.' ... The result has been the acceptance of a non-existent personage, 'Jane Poythress', in the Bibles of Virginia genealogy, as the bona fide ancestress of many illustrious Virginians. Who the wife (or wives) of Thomas Rolfe may have been remains an unanswered question.

Pocahontas' Descendants by Stuart Brown et al (1995), which is the most updated version of POCAHONTAS' DESCENDANTS: A Revision, Enlargement and Extension of the List as Set out by Wyndham Robertson in His Book Pocahontas and Her Descendants (1887) that he was only married once "to possibly the daughter of Francis Poytress, a Virginia colonist" . If there was a first marriage in England before he moved to Virginia to claim his inheritance & land, the first wife was listed as "unknown".

Thomas's alleged marriage to Elizabeth Washington in 1632 is claimed to have produced a child, Anne Rolfe.

"The Elwyn family of Thurning, Norfolk, England, claims that Anne Rolfe, “cousin and adopted” daughter of Anthony Rolfe of Tuttington, Norfolk, and wife of Peter Elwyn of Thurning (1623-1695/6) was also a daughter of Thomas Rolfe, Pocahontas’s son, by an early English wife. Brown, Myers, and Chappel accept this claim; Moore and Slatton do not, and I [who?] am skeptical also. Margaret Wake, a great-granddaughter of Peter and Anne, married William Tryon (1729-1788), colonial Governor of North Carolina and New York.

Wyndham Robertson in his preface (1887, p. iv) appears to accept the Elwyn claim, while perhaps not understanding the implications.

An independent and separate claim says that Thomas Rolfe had another undocumented daughter, also called Anne Rolfe, in Virginia in the 1640s. She married a William Barnett (from whose descendants this claim unsurprisingly originates).

The "Uncertain Existence" profile for Anthony Rolfe (1655-bef.1755) says his parents are Thomas and Jane (citing an online tree without a reliable source). 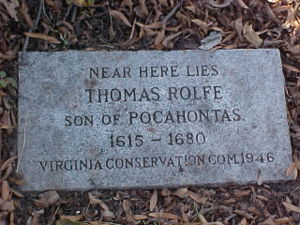 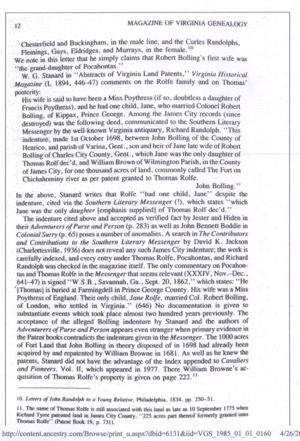 Liz (Noland) Shifflett
remarkable likeness - could be twins even :D

should we just detach the duplicate posted here as a portrait of Thomas or "save" it somewhere (once a picture isn't connected to a profile or space page, it's deleted).

update: I changed the title for the image (from Thomas Rolfe to Wyndham Robertson) & the only profile it's attached to now is his (Robertson-6654's). Even though the same image had been attached to Robertson's profile in 2015, I didn't want to lose the discussion of the picture that is with the image uploaded as Rolfe-744.jpg.

Harry Carlson
The information provided to me by my cousin, Patricia Gresham, says Thomas's middle name was Powhatten, and that he died in Richmond, Wise County, Virginia in 1675.
posted Jun 16, 2017 by Harry Carlson