Peter Romanov was a member of the aristocracy in Europe.

Peter's father was Tsar Alexis I. His older half-brother was the sickly Feodor III, who died in 1682 without any children. Peter's other half-brother, Ivan V, was next in line for the throne, but he was chronically ill and of infirm mind. Consequently, the Boyar Duma (a council of Russian nobles) chose the 10-year-old Peter to become Tsar with his mother as regent.

Peter the Great had two wives, with whom he had fourteen children, three of whom survived to adulthood. Peter's mother selected his first wife, Eudoxia Lopukhina, with the advice of other nobles in 1689. This was consistent with previous Romanov tradition by choosing a daughter of a minor noble. This was done to prevent fighting between the stronger noble houses and to bring fresh blood into the family. He also had a mistress from Germany, Anna Mons. In 1698, Peter divorced the Tsaritsa and forced her to join a convent. The Tsaritsa had borne Peter three children, although only one, the Tsarevich Alexei, had survived past his childhood.

He took Martha Skavronskaya, a peasant, as a mistress some time between 1702 and 1704. Martha took the name Catherine. Though no record exists, Catherine and Peter are described as having married secretly between 23 Oct and 1 Dec 1707 in St. Petersburg. Peter valued Catherine and married her again (this time officially) at Saint Isaac's Cathedral in Saint Petersburg on 9 February 1712.

His eldest child and heir, Alexei, was suspected of being involved in a plot to overthrow the Emperor. Alexei was tried and confessed under torture during questioning conducted by a secular court. He was convicted and sentenced to be executed. The sentence could be carried out only with Peter's signed authorization, and Alexei died in prison, as Peter hesitated before making the decision. Alexei's death most likely resulted from injuries suffered during his torture. Alexei's mother Eudoxia had also been punished; she was dragged from her home and tried on false charges of adultery. A similar fate befell Peter's earlier mistress, Anna Mons, in 1704.

In 1724 Peter had his second wife, Catherine, crowned as Empress, although he remained Russia's actual ruler. All of Peter's male children had died. 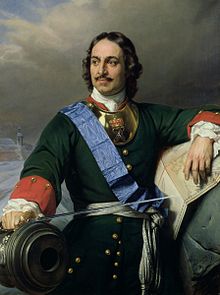 Kelsey Jackson Williams
See the ongoing discussion at soc.genealogy.medieval concerning a possible illegitimate daughter of Peter, Helena von Schultz.
posted Jan 05, 2020 by Kelsey Jackson Williams
[Living Guthrie]
This profile is orphaned. It would be good to see it connected to the rest of the family, for example to his grandson, Tsar Peter III of Russia: Romanov-33
posted Aug 11, 2017 by [Living Guthrie]