His father was Flavius Valerius Aurelius Constantinus Augustus (57th emperor of Rome) and his mother was Julia Flavia Augusta.

Constantine married or otherwise began his relationship with Minervina in 303.

Constantine's relationship with Minervina is uncertain. If theirs was a real marriage, a divorce would have been required before his second marriage, but no record exists of one. On the other hand, if the relationship had been illegitimate, Constantine is unlikely to have treated their son Crispus as well as he did. One suggestion is that Minervina might already have been dead by 308. [7]

After setting Minerva aside in 307, he married Fausta (Maxima Fausta Augusta). [7]

In 326 Constantine had Fausta killed in an overheated bath. [1]

In February 313 the Edict of Milan was signed by Constantine and co-emperor Valerius Licinius. The Edict granted religious freedom for the Roman Empire. Posted in Nicomedia.[10]

In 325, in a effort to restore religious peace, Constantine called the religious leaders of Christendom to meet at the First Council of Nicea and settle the controversy between the Christian theologians Arius and Athanasius, both of Alexandria, Egypt, primarily over the nature of God and Jesus.[1]

Constantine was baptized a Christian on his deathbed, 22 May 0337 in Constantinople by Eusebius of Nicomedia. [11]

He was buried in the Church of the Holy Apostles, Constantinople [12]

Children by his first marriage to Minervina

Between 15 May and 17 June 326, Constantine had Crispus seized and poisoned to death while he was in Croatia. [1]

Children by his second marriage to Fausta

Children Not Named Above

A bogus pedigree initiated by Henry of Huntingdon inserts St. Helen (Empress of Rome), as a daughter to make Coel the father of Constantius Chlorus ... The false pedigree was then passed on by Geoffrey of Monmouth:[6]

posted 4 Dec 2011 by Paul Lee
Login to add a memory.
Is Constantine your ancestor? Please don't go away!

ask our community of genealogists a question.
Sponsored Search by Ancestry.com
DNA
No known carriers of Constantine's DNA have taken a DNA test. 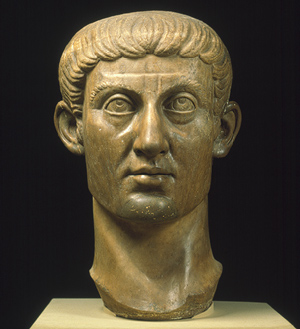 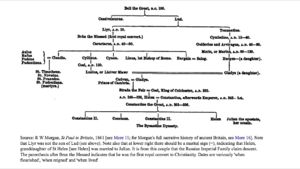 Leave a message for others who see this profile.
There are no comments yet.
Login to post a comment.
K. Bloom
Shouldn't LNAB be Constantius? See https://en.wikipedia.org/wiki/Roman_naming_conventions#Nomen
posted Jul 15, 2019 by K. Bloom