The Vatican’s substantial biography of Pope John XXIII starts with the statement:

Bl. Pope John XXIII was born Angelo Giuseppe Roncalli at Sotto il Monte, Italy, in the Diocese of Bergamo on 25 November 1881. [1] He was the fourth in a family of 14. The family worked as sharecroppers. It was a patriarchal family in the sense that the families of two brothers lived together, headed by his great-uncle Zaverio, who had never married and whose wisdom guided the work and other business of the family. Zaverio was Angelo's godfather, and to him he always attributed his first and most fundamental religious education. The religious atmosphere of his family and the fervent life of the parish, under the guidance of Fr Francesco Rebuzzini, provided him with training in the Christian life.[2]

He studied at the Pontifical Roman Seminary between 1901 and 1905 before being ordained to the priesthood on 10 August 1904 in the church of Santa Maria in Monte Santo, in Piazza del Popolo, Rome, Italy by Giuseppe Ceppetelli. His first appointment was as secretary to the new Bishop of Bergamo.[2]

He was drafted as a sergeant in the medical corps when Italy went to war in 1915 and became a chaplain to wounded soldiers.[2] Benedict XV brought him to Rome to be the Italian president of the Society for the Propagation of the Faith in 1921. On 19 March 1925 he was ordained Bishop and left for Bulgaria as Apostolic Visitator in Bulgaria, the in 1935 he was named Apostolic Delegate in Turkey and Greece. He was in Greece when World War II started and assisted many Jews to escape by issuing "transit visas" from the Apostolic Delegation. In December 1944 Pius XII appointed him Nuncio in France. In 1953 he was created a Cardinal and sent to Venice as Patriarch..[2]

The Vatican biography[2] ends with:

At the death of Pius XII he was elected Pope on 28 October 1958, taking the name John XXIII. His pontificate, which lasted less than five years, presented him to the entire world as an authentic image of the Good Shepherd. Meek and gentle, enterprising and courageous, simple and active, he carried out the Christian duties of the corporal and spiritual works of mercy: visiting the imprisoned and the sick, welcoming those of every nation and faith, bestowing on all his exquisite fatherly care.
He convoked the Roman Synod, established the Commission for the Revision of the Code of Canon Law and summoned the Second Vatican Council. He was present as Bishop in his Diocese of Rome through his visitation of the parishes, especially those in the new suburbs. The faithful saw in him a reflection of the goodness of God and called him "the good Pope". He was sustained by a profound spirit of prayer. He launched an extensive renewal of the Church, while radiating the peace of one who always trusted in the Lord. Pope John XXIII died on the evening of 3 June 1963, in a spirit of profound trust in Jesus and of longing for his embrace.

On 3 September 2000, John XXIII was declared "Blessed" alongside Pope Pius IX by Pope John Paul II. On 5 July 2013, Francis approved Pope John XXIII for canonization, along with Pope John Paul II. On Sunday, 27 April 2014, John XXIII and Pope John Paul II were declared saints on Divine Mercy Sunday. The date assigned for the liturgical celebration of John XXIII is not 3 June, the anniversary of his death as would be usual, but 11 October, the anniversary of his opening of the Second Vatican Council. He is also commemorated in the Anglican Church of Canada, the Evangelical Lutheran Church in America, and some other organizations with a feast day of 4 June, changed originally from 3 June.[3]

This profile is being updated by the Popes Project.

Wikipedia is not a reliable source. Please check for quality sources for this profile. 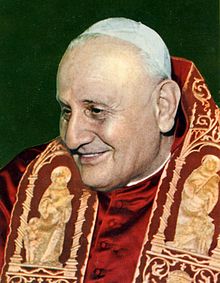