Franklin Delano Roosevelt (often called FDR) was the thirty-second president of the United States. He served from 1933 through 1945. Assuming the Presidency at the depth of the Great Depression, Franklin D. Roosevelt helped the American people regain faith in themselves. He brought hope as he promised prompt, vigorous action, and asserted in his Inaugural Address, "the only thing we have to fear is fear itself."

Following the example of his fifth cousin, President Theodore Roosevelt, whom he greatly admired, Franklin D. Roosevelt entered public service through politics, but as a Democrat. He won election to the New York Senate in 1910. President Wilson appointed him Assistant Secretary of the Navy, and he was the Democratic nominee for Vice President in 1920.

In the summer of 1921, when he was 39, disaster hit-he was stricken with poliomyelitis. Demonstrating indomitable courage, he fought to regain the use of his legs, particularly through swimming. At the 1924 Democratic Convention he dramatically appeared on crutches to nominate Alfred E. Smith as "the Happy Warrior." In 1928 Roosevelt became Governor of New York.

He was elected President in November 1932, to the first of four terms. By March there were 13,000,000 unemployed, and almost every bank was closed. In his first "hundred days," he proposed, and Congress enacted, a sweeping program to bring recovery to business and agriculture, relief to the unemployed and to those in danger of losing farms and homes, and reform, especially through the establishment of the Tennessee Valley Authority.

By 1935 the Nation had achieved some measure of recovery, but businessmen and bankers were turning more and more against Roosevelt's New Deal program. They feared his experiments, were appalled because he had taken the Nation off the gold standard and allowed deficits in the budget, and disliked the concessions to labor. Roosevelt responded with a new program of reform: Social Security, heavier taxes on the wealthy, new controls over banks and public utilities, and an enormous work relief program for the unemployed.

In 1936 he was re-elected by a top-heavy margin. Feeling he was armed with a popular mandate, he sought legislation to enlarge the Supreme Court, which had been invalidating key New Deal measures. Roosevelt lost the Supreme Court battle, but a revolution in constitutional law took place. Thereafter the Government could legally regulate the economy.

Roosevelt had pledged the United States to the "good neighbor" policy, transforming the Monroe Doctrine from a unilateral American manifesto into arrangements for mutual action against aggressors. He also sought through neutrality legislation to keep the United States out of the war in Europe, yet at the same time to strengthen nations threatened or attacked. When France fell and England came under siege in 1940, he began to send Great Britain all possible aid short of actual military involvement.

When the Japanese attacked Pearl Harbor on 07 December 1941, Roosevelt directed organization of the Nation's manpower and resources for global war.

Feeling that the future peace of the world would depend upon relations between the United States and Russia, he devoted much thought to the planning of a United Nations, in which, he hoped, international difficulties could be settled.

As the war drew to a close, Roosevelt's health deteriorated, and on 12 April 1945, while at Warm Springs, Georgia, he died of a cerebral hemorrhage.

Funeral services were held 16 April 1945 at Notre Dame for United States President Franklin Delano Roosevelt as a way to honor him.

FDR was also related to:


Memories: 5
Enter a personal reminiscence or story.
Cathryn (Hallett) Hondros
She (Verona Kukart Christie) joined the Naval Reserves in April 1917, and was assigned to communications offices in Washington, D.C., where Franklin Delano Roosevelt, then assistant secretary of the Navy, was an across-the-hall neighbor. President Roosevelt appointed her borough (Fanwood, Union county, New Jersey) postmaster on Nov. 21, 1933. — “The Courier-News”, (Bridgewater, New Jersey), 04 Feb 1987, page 11]
posted 21 Apr 2021 by Cathryn (Hallett) Hondros   [thank Cathryn]
Terry Barrett
A 27 year member of Park Lodge No 203 I.O.O.F.
posted 24 Jan 2021 by Terry Barrett   [thank Terry]
Jim Haviland
"[Benjamin] Haviland was one of the very few people who continued to call him Franklin even when he was president of the United States. On one occasion, when discussing the relations of their own ancestors, Haviland questioned whether a story was true and Roosevelt allegedly replied, "Never mind the truth. It's a good story and the truth will take care of itself."

posted 21 Jul 2019 by Jim Haviland   [thank Jim]
John Walker IV
During the war my mother spent much of her childhood at White House with her grandfather Flt Adm Leahy . Leahy, “B”, had become close friends with FDR when he was asst Secretary of the Navy

I asked her what was fondness memory she had of FDR

When she was about 12 FDR gave his inauguration speech from the White House balcony With a powerful voice he held on to the rail with a lengthy speech My mother was standing behind him observing the strength in his voice and face as he held the rail firmly . Then she realized as FDR spoke his legs were not touching the floor and were swaying as he spoke

posted 25 Oct 2018 by John Walker IV   [thank John]
Linda (Ortland) Larson
My grandfather came to know Franklin Roosevelt, they both were members of the same club. A some point when he was Secretary of State he appointed my grandfather to Annapolis Naval Academy Henry Ortland Jr. Our family has this document.
posted 29 Mar 2017 by Linda (Ortland) Larson   [thank Linda]
Login to add a memory.
Sponsored Search by Ancestry.com
DNA
No known carriers of Franklin's DNA have taken a DNA test. 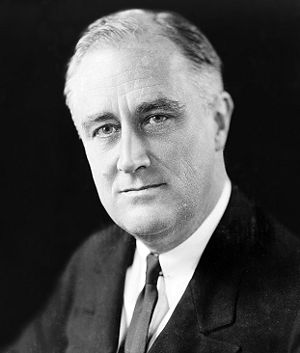 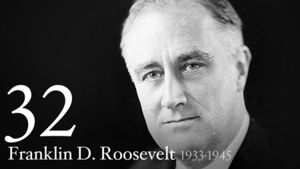 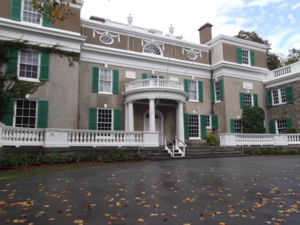 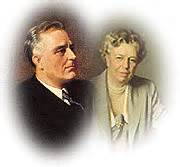 Carole Taylor
A New Testament hand Bible was found in the family Keepsakes it was handed out to all Armed Forces. There is a letter from President FDR in the front pages and we started a FREE SPACE to see how many others have survived and handed down to us. Here is the FREE SPACE and a photo of the pages is attached to this profile.

John Atkinson
The photograph labelled Notre Dame Cathedral image 5 comes from Insider.com and their Terms of Service appear to forbid any reproduction of such images

See here https://www.insider-inc.com/terms/ and scroll down to Intellectual Property Rights.

Given the photo is from 1945 it may be possible to find it elsewhere, but currently it seems to be in breach of copyright.

Photo of packed Cathedral is tagged.

Jelena Eckstädt
He was 44th Governor of New York, but preceded by the 42nd? Is that a mistake?
posted Oct 22, 2018 by Jelena Eckstädt

Abby (Brown) Glann
This biography looks great! Any chances we can add some inline citations? It's very helpful to those who didn't contribute to the profile but would like to see where a fact came from. Thanks!
posted Oct 19, 2018 by Abby (Brown) Glann

Shirley Davis
President Roosevelt died suddenly of a cerebral hemorrhage while he was sitting for a portrait. The "Unfinished Portrait" remains on the easel as it was when the artist Elizabeth Shoumatoff laid down her brush. Story from The Charles Stanley Life Principles Bible page 1220.
posted Sep 30, 2017 by Shirley Davis

Yvonne (Williams) Doñate
Hey I noticed you did not include their child that died. He was the first Franklin , Jr born in 1909 and died in 1909. If wikitree wont let you add the child you can always make notes in all the family members bio's