James Roosevelt was the oldest son of President Franklin D. Roosevelt (FDR) and Eleanor Roosevelt. Although he attended Harvard University, he never graduated.

In 1939 he resigned a lieutenant colonel's commission in order to join the Marine Corps Reserves. He went on activity duty in 1940. In 1941, he was sent on a political assignment by his father to the Middle East.

After Pearl Harbor, he requested combat duty. He went on to become second-in-command of the 2nd Marine Raider Battalion.

He retired from active duty in October 1945, with rank of Colonel, but continued on in the Marine Corps Reserves and eventually retired in 1959 at the rank of Brigadier General.

He was employed as an insurance executive until 1937, when he became secretary to his father in the White House.

James Roosevelt died at the age of 83 in 1991 of complications from a stroke and Parkinson's disease. He was the last surviving child of Franklin and Eleanor Roosevelt. 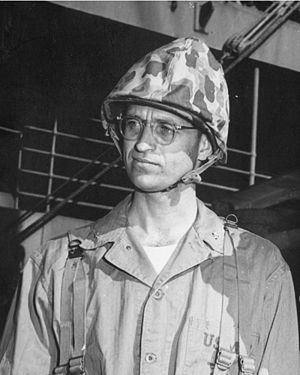