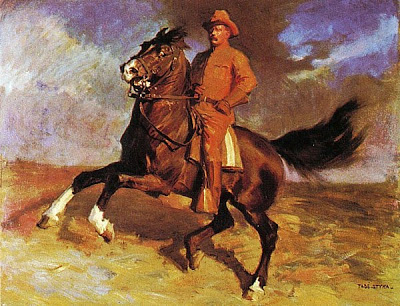 Theodore Roosevelt Jr. was awarded the Medal of Honor.

Theodore Roosevelt, Jr was born in 1858 to Theodore "Thee" Roosevelt Sr. and Martha Bulloch. Teddy had 2 sisters and 1 brother. Their names were Anna, Corinne and Elliott. Anna and Teddy were extremely close and Teddy called her "Bamie". Theodore or "Teedie" as he was known by family, hated the nickname Teddy, grew up in New York City. He was mostly home-schooled due to his Asthma and other illnesses. He went to school at Harvard where he developed an interest in naval affairs.

Theodore Roosevelt married his first wife Alice on 27th October 1880. He was very excited about the birth of their first child also named Alice in February 1884. He lost his wife and mother on the same day, two days after the baby's birth. He left baby Alice in the care of his sister Bamie, (Anna's nickname) while he grieved over his losses in the West.

His second marriage to Edith Kermit Carow produced 5 children. Theodore knew Edith for most of their lives and had actually dated and were engaged before he met his first wife Alice.

Theodore's hobbies included reading, hunting and protecting the environment. He also liked to box to build his physique. He especially loved to read science, nature, and hunting books because he found them very amusing and interesting.

He was considered a true American hero, the example that people should live by.

Theodore Roosevelt graduated from Harvard in 1880 and went on to Columbia Law School it was there where he dropped out to enter politics.

He published his first historical book in 1882 called The Naval War of 1812.

As a New York state legislator, he was appointed to the United States Civil Service Commission by Benjamin Harrison in 1888 and served until 1895. He worked as New York City Police Commissioner, for 2 years. He became Assistant Secretary of the Navy in 1898 and and Colonel of the Rough Riders. Later in 1898 he became governor of New York.

President Theodore Roosevelt’s interventionist foreign policy subverted the Constitution and helped transform America into the most powerful nation on Earth.

He was the first world leader to make an argument to the Court of Arbitration at The Hague. He also was first to call for convening of what became the Second Hague Peace Conference at which he got the Latin American Nations to equal the rest of the world.

When Roosevelt was president he tried to make the Republican Party more progressive, which included trust busting, and increasing the regulation of businesses.

Roosevelt helped create the Panama Canal and negotiated an end to the Russo-Japanese war, which earned him the Nobel Peace Prize. 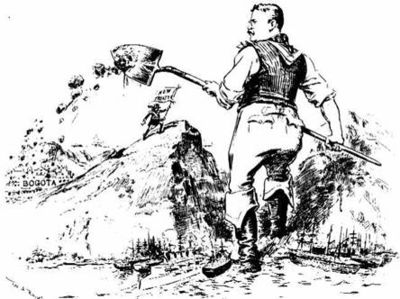 In 1912 Roosevelt when on a expedition to South America, where he got malaria. The malaria damaged his health.[1]

He was a successful president, naturalist, historian, lawyer and explorer. He was also a member of the Freemasons and Sons of the American Revolution[2][3]

In 1918, his youngest son Quentin was killed in WWI.

It was 06 January 1919, when Theodore passed away from coronary embolism in his sleep at his home, Sagamore Hill. He was buried in Young's Memorial Cemetery at Oyster Bay, New York. [4]


Memories: 4
Enter a personal reminiscence or story.
Patricia (Long) Kent
He established the US Forest Service and signed the 1906 Antiquities Act under which he proclaimed 18 National Monuments, establised 5 National Parks, 51 Wildlife Refuges and 150 Natiional Forests - also 1st cousin 11x thru Munro line
posted 20 Feb 2019 by Patricia (Long) Kent   [thank Patricia]
Jon Bush II
I have always been fascinated with this courageous and forthright man. "Speak softly, but carry a big stick." Maybe more so now that I know we're related. 15th cousin three times removed.
posted 21 Mar 2018 by Jon Bush II   [thank Jon]
Joseph Nieto
Theodore Roosevelt will be mainly remember because he was our 26th president. He had an eight year presidency. He is the one who founded The NCAA also known as the National Collegiate Athletic Association. While he was in office he gave federal protection over 230 million acres of land that spread from Maine to Florida.
posted 30 Oct 2009 by Joseph Nieto
Mark O'Neill
Inspiring quote:

"A man who has never gone to school may steal from a freight car; but if he has a university education, he may steal the whole railroad."-Theodore Roosevelt

posted 29 Oct 2009 by Mark O'Neill
Login to add a memory.
Sponsored Search by Ancestry.com
DNA
No known carriers of Theodore's DNA have taken a DNA test. 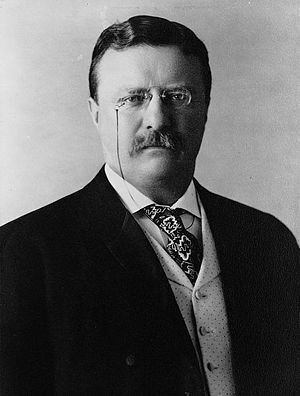 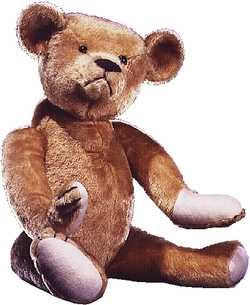 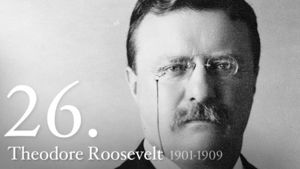 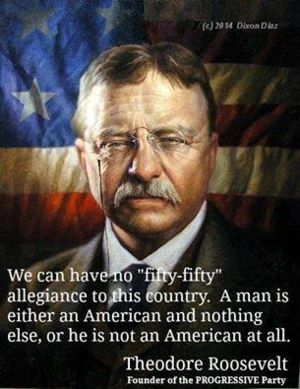 Karen Neuvirth
Hello, I just wanted to share a profile of a an african american woman President Roosevelt had a hand in protecting. https://www.wikitree.com/wiki/Gedding-19
posted Feb 24, 2019 by Karen Neuvirth

Cheryl Givens
Thousands of Theodore Roosevelt's Papers Are Now Online https://www.loc.gov Library of Congress - The majority of the material dates 1878 through 1919, the year of his death. Most of the material digitized from reels(485)of microfilm.
posted Oct 18, 2018 by Cheryl Givens

Lisa (Kelsey) Murphy
... who neither enjoy much nor suffer much, because they live in the gray twilight that knows neither victory nor defeat."

Lisa (Kelsey) Murphy
He was the youngest U.S. President in history. Only person to win both the Medal of Honor and the Nobel Peace Prize. He was big into busting up the trusts that some American companies had built. He fought to become the first presidential conservationist. Established 18 national monuments, 5 national parks and more than one hundred million acres of national forest lands. He asked if there was a law to keep him from declaring Pelican Island a National Sanctuary when he heard the birds were being killed for fun. His aide said no, he ordered it to be done. He is quoted as saying "Far better it is to dare mighty things, to win glorious triumph, even though checkered by failure, than to take rank with those poor spirits ...
posted Sep 18, 2017 by Lisa (Kelsey) Murphy

Robin Lee
Roosevelt-437 and Roosevelt-18 appear to represent the same person because: please merge, along with the parents
posted Aug 02, 2017 by Robin Lee

Yvonne (Williams) Doñate
I edited the biography section onlyfor you guys, hope you dont mind, but it was all out of wack with several bits of wrong info like birthdate and college grad and wives names and children. Dont worry i did not change anything. Only the biography portion. Which appeared to be unedited after a merge.

Be sure you are editing the biography after a merge or you get two bios like u had here.

Cara Kajewski
Possibly an error with child - Alice Lee Roosevelt was born to Alice Hathaway (Lee) Roosevelt in 1884 - the paragraph suggests the childs name to be Edith Alice.
posted Apr 17, 2015 by Cara Kajewski