Theodore Roosevelt III was awarded the Medal of Honor.
Medals of Honor/Honour - Legion of Honour

This profile won Profile of the Week the Fourth week of April 2014.

Theodore "Ted" Roosevelt III (generally known as Theodore, Jr.) (September 13, 1887 – July 12, 1944), was an American political and business leader, a veteran of both the world wars, who was awarded the Medal of Honor. He was the eldest son of President Theodore Roosevelt and Edith Roosevelt.
Roosevelt was instrumental in the forming of the American Legion in 1919. He later served as Assistant Secretary of the Navy, Governor of Puerto Rico (1929–32), Governor-General of the Philippines (1932–33), Chairman of the Board of American Express Company, and Vice-President at Doubleday Books, and as a Brigadier General in the United States Army.
Hon Theodore was born in 1887. He is the son of Theodore Roosevelt and Edith Carow. [1]
In 1940, he attended a military refresher course offered to many businessmen as an advanced student, and was promoted to colonel in the Army of the United States. He returned to active duty in April 1941 and was given command of the 26th Infantry Regiment, 1st Infantry Division, the same unit he fought with in World War I. Late in 1941, he was promoted to brigadier general.
Throughout World War II, Roosevelt suffered from health problems. He had arthritis, mostly from old World War I injuries, and walked with a cane. He also had heart trouble.
On July 12, 1944, a little over one month after the landing at Utah Beach, he died suddenly of a heart attack near Sainte-Mère-Église in Normandy, France. He was living at the time in a converted sleeping truck, captured a few days before from the Germans. He had spent part of the day in a long conversation with his son, Captain Quentin Roosevelt II, who had participated with him in the Normandy landing. He was stricken at about 10 pm and died, attended by medical help, at about midnight. He was fifty-six years old. On the day of his death he had been selected by General Omar Bradley for promotion to major general and orders had been cut placing him in command of the 90th Infantry Division. These recommendations were sent to General Dwight D. Eisenhower for approval, but when Eisenhower called the next morning to approve them, he was told that Roosevelt had died during the night.
Roosevelt was buried at the American cemetery in Normandy, initially created for the Americans killed in Normandy during the invasion. His younger brother, Lieutenant Quentin Roosevelt had been killed as a pilot in France during World War I and was initially buried at the Oise-Aisne American Cemetery and Memorial for veterans of WWI at Fère-en-Tardenois, France, near where he had been shot down in that war. In 1955, his family had his body exhumed and moved to the Normandy cemetery, where he was re-interred next to his brother.
Wikipedia Theodore Roosevelt Jr

Shortly after World War I ended, twenty officers of the American Expeditionary Forces met in Paris with orders to confer on how the Army could improve troop morale. One of the officers, Lt. Col. Theodore Roosevelt Jr., son of President Theodore Roosevelt, suggested an idea that had already crossed many of the men’s minds: an organization in which veterans could stay in touch, help each other, and work together after the fighting was over.
The officers wasted no time putting the idea into action. On March 15, 1919, about one thousand U.S. soldiers gathered in Paris for the very first meeting of the American Legion.
Today the Legion is the nation’s largest veterans’ organization, with about 2.6 million members. Men and women may join if they have served honorably in the U.S. armed forces during times of hostilities, such as World War II, the Korean War, Vietnam War, Persian Gulf War, and Iraq War.
The Legion’s purpose is partly to help veterans continue friendships formed during military service. It also gives members a way to keep serving their country. The American Legion has built parks and playgrounds, donated equipment to hospitals and fire halls, sponsored Boy Scout troops and youth baseball leagues, promoted the study of the Constitution in schools, and much more.
For God and Country is the American Legion motto. The organization has 14,000 posts worldwide. There is probably one near you, and your community is almost certainly a better place for it.

Sponsored Search by Ancestry.com
DNA
No known carriers of Theodore's DNA have taken a DNA test. 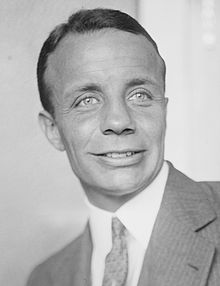 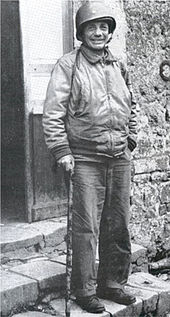 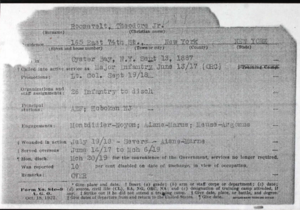 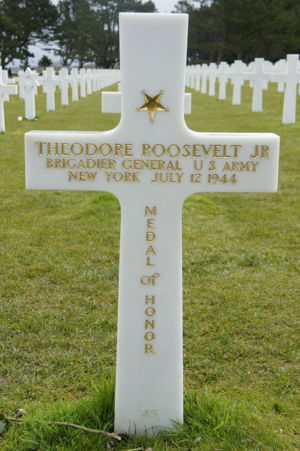 Steve Cole
The personal jeep of General Theodore Roosevelt III had its name painted on it: "Rough Rider". This name reflects back to the name given to the men who served under his Father in the Spanish American War.
posted Mar 21, 2015 by Steve Cole

December 7, 2014
posted Dec 07, 2014 by Paula J
M. (Stewart) H.
The global reunion tag was removed because of incomplete data for Hannah Peeck (daughter of Johannes) and her husband, John Bogart;

Hannah and John's daughter, Annetje Bogart and her marriage to Jacobus Roosevelt; and

Maggie N.
Wow ! I am so happy to see this one evolve into a great profile ! Thanks to the " team" and Mary !
posted Apr 26, 2014 by Maggie N.
April (Dellinger) Dauenhauer
Congratulations to the managers and team who put together this wonderful biography of Theodore jr. I really enjoyed learning about this American hero and son of a president I have long admired.
posted Apr 25, 2014 by April (Dellinger) Dauenhauer