He served as a captain in the US Army in World War I.

Archibald was born in 1894. He is the son of Theodore Roosevelt and Edith Carow. [1]

Sponsored Search by Ancestry.com
DNA
No known carriers of Archibald's DNA have taken a DNA test. 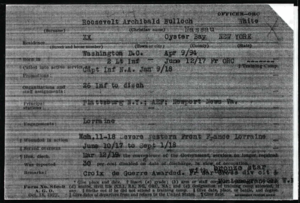 Robin Lee
Please add [email address removed] as a manager on this profile. Thank you.
posted Oct 31, 2018 by Robin Lee

Maggie N.
Please merge the two duplicates together for the US Presidents Project !
posted Oct 31, 2013 by Maggie N.

Maggie N.
Please merge the two duplicates together for the US Presidents Project ! Thanks !
posted Oct 31, 2013 by Maggie N.