He emigrated to Israel, where he changed his name to Jashuvi. He married Yehudit Goldschmidt, known as Betty and they had three children, Gabriel (Rosenthal) Jashuvi, Rachel Galay, Uriel Jashuvi, and one whose first name is not known.[1]

Hugo's son Gabriel was born June 1, 1920 in Braunschweig, Niedersachsen, Deutschland before Hugo's last name was changed from Rosenthal to Jashuvi. Gabriel used an alternate spelling, Yahuvi, however. He died May 1, 1943,[1] during World War II, when he was killed and lost at sea.[2]

Hugo's daughter Rachel married Benjamin Galay and they had one child. Benjamin was born April 10, 1921 in Vladivostok, Russia and died May 24, 1995 in Jerusalem, Israel. [1]

Hugo's son Uriel was born December 10, 1923 in Wolfenbüttel, Lower Saxony, Germany. He married and had a daughter, Naama, who married Mr. Hayet.[1] 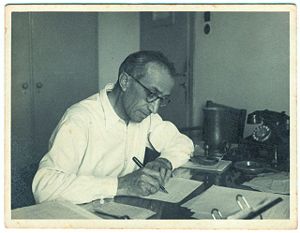