Colonel George Ross was a Founding Father in the American Revolution

George Ross, born 10 May 1730,[1][2] in Newcastle, Delaware,[2] was the son of Catherine Van Gezel and George Ross,[3] a minister of the episcopal church at New Castle. The older George had been educated at Edinburgh and was able to give his children a good education.[4] When George, the son, was eighteen, he began to study law, instructed by an older half-brother John[3]. He was admitted to the bar, and began practice in Lancaster, Pennsylvania, a relatively new settlement.[5]

George married Ann Lawler, a lady from a respectable family, on 14 August 1751.[6] They had three children:[6]

George also had an interest in making iron and records show that he was an iron master when he died.[3]

Politically George was a Tory and he spent twelve years as the Crown Prosecutor (attorney general) to Carlisle.[4] His reputation as counsellor and advocate, led to his election to the Pennsylvania Assembly, in 1768. He continued in this office until 1774,[5] at which time he was elected to the provincial conference that would select delegates to attend the General Congress. He was selected as representative of Pennsylvania to the Continental Congress that same year and in 1776 and 1777.[4]

His constituents recognized his worth and " Resolved, that the sum of one hundred and fifty pounds, out of the county stock, be forthwith transmitted to George Ross ... as a testimony from this county, of their sense of his attendance on the public business, to his great private loss, and of their approbation of his conduct..." He declined this gift believing that every man should contribute, to the welfare of his country, without expecting pecuniary rewards.[5]

During his time working on national affairs, George Ross continued to work with the provincial legislature. In the summer of 1775, it was recognized that circumstances required that Philadelphia and Pennsylvania be ready to defend itself. A committee, including George Ross was formed and recommended that people "associate" for the protection of their lives, and liberty, and property", and urged the counties to collect arms and ammunition and arms. The associations formed who were called to repel British attacks would be paid.[5] George was a Colonel to the First Battalion of Associators for Lancaster County.[3] A committee of public safety was appointed, and given the necessary authority. George was an active member of this committee and also of the grievances committee.[5]

George took his seat in the Continental Congress July 20, 1776 and signed his name to the Declaration of Independence August 2.[3]

Also in 1776, he negotiated with the Northwestern Indians on behalf of his colony, and took a seat as vice-president of the first constitutional convention for Pennsylvania."[4][5]

George resigned his duties with the Continental Congress in Jan 1777 due to bad health. He suffered from severe gout.[5][3]

George had a house in Lancaster, and a farm in what was then the suburbs. He was vestryman and warden of St. James' Church, Lancaster. "Genial, kind and considerate, his sense of humor evidently lightened the cares of strenuous life."[3]

George Ross was appointed a judge of the Court of Admiralty for the state of Pennsylvania, on April 14, 1779.[7] Within a few months he was suddenly and violently attacked by the gout,[5] and died July 14, 1779,[5][1] at his home outside of Philadelphia.[5]

The Pennsylvania Packet Thursday 15 July 1779 p. 3 reported: "Yesterday died at his seat near this city, the Honorable George Ross, Esquire, Judge of Admiralty of this State, who justly merited the character of a firm and impartial Judge."

A stone containing a plaque was placed on his grave at Christ Churchyard in Philadelphia, by the DAR, in 1897. The plaque gives his vitals and states: He served in the Continental Congress from 1774 to 1777 and was 46 years old when he signed the Declaration of Independence.[2]

Thank you to John DeFalco for creating WikiTree profile Ross-4194 through the import of Johns Complete Tree_2013-08-17.ged on Aug 17, 2013, and Kennon Edwards through the import of Edwards Family Tree.ged on May 29, 2011. See the Changes page for the details of edits by Kennon and others.

Sponsored Search by Ancestry.com
DNA Connections
It may be possible to confirm family relationships with George by comparing test results with other carriers of his Y-chromosome or his mother's mitochondrial DNA. However, there are no known yDNA or mtDNA test-takers in his direct paternal or maternal line. It is likely that these autosomal DNA test-takers will share DNA with George: 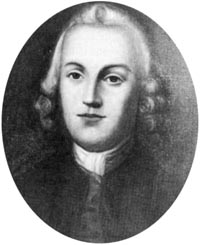 George Ross's Signature from the Declaration of Independance 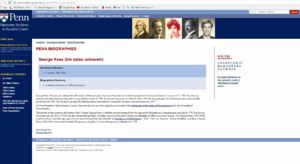 Anne B
George only had one wife Ann Lawler and three children, George, James and Mary. Margaret Kilroy and Hewitt Ross do not belong to this George Ross. Hearing no objections I will disconnect them.
posted Jun 16, 2015 by Anne B

George is 13 degrees from Cecil B. DeMille, 22 degrees from Rosalie Neve and 14 degrees from Henry VIII of England on our single family tree. Login to find your connection.