A Short Extract from 1911 Encyclopedia Brittanica:

RUNCIMAN, ALEXANDER (1736-1785), Scottish historical painter, was born in Edinburgh in 1736. He studied at Foulis's Academy, Glasgow, and at the age of thirty proceeded to Rome, where he spent five years. It was at this time that he became acquainted with Fuseli. The painter's earliest efforts had been in landscape; he soon, however, turned to historical and imaginative subjects, exhibiting his “Nausicaa at Play with her Maidens” in 1767 at the Free Society of British Artists, Edinburgh. On his return from Italy, after a brief residence in London, where in 1772 he exhibited in the Royal Academy, he settled in Edinburgh, and was appointed master of the Trustees' Academy. He was patronized by Sir James Clerk, whose hall at Penicuik House he decorated with a series of subjects from Ossian.

Place: Edinburgh, Midlothian, Scotland
Note: From Wikipedia, although another biographical dictionary (Chalmers) has 21st Oct
A brief note appeared in both the London Chronicle, and in the Morning Herald and Daily Advertiser, both London papers, on Nov 24th and 25th respectively, referring to the "monument of his genius and taste". The 21st does seem rather closer to his burial on the 24th Oct.[11][12][13][14]

Place: The Royal Mile, Edinburgh, Midlothian, Scotland
Note: A memorial to Alexander and his artist brother John is placed on an exterior wall of the Church.[17]

Is there a surviving line of descendants?

Searches have as yet not identified the fate of his natural son John, silversmith in London before 1802. Any takers? Refer to Source References for further detail. [21][22] 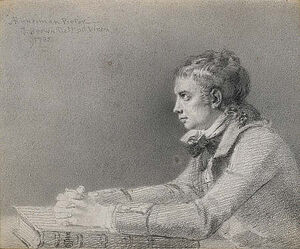 Lorna Henderson
Agree that the 21st date trumps the 4th from WikiPedia - although technically, the 21st isn't mentioned in the burial record.

I see that you figured out you can edit for yourself Alan :) Have done a post import tidy up to get rid of some of the extraneous bits ....

Alan Runciman Jr
I think Alexander's date of death should be amended to 21 October 1785 rather than 4th.The former is the date recorded on the official OPR of Canongate Church on the Royal Mile, Edinburgh. Scotlands People Ref No 685/03 0230 0457.
posted Jan 05, 2015 by Alan Runciman Jr