Christian Rusch is a Volga German.

See the copy of that document is attached to this profile. So while his father's name and his child's godparents' may be specifically mentioned, his mother's name is not identifiable in this record.

Ernst Christian and his family immigrated to Russia in 1766, but none of their names appear in the Kulberg List of German immigrants to Russia. [2] Their names also do not appear in the Transportation List that documents the travelers from Saint Petersburg to the Volga region of Russia. [3] Nonetheless, the family is recorded as being some of the first settlers of the Colony of Grimm. This record misstates his age.

His age in this record is wrong. If he was born in 1750, he would have been 16 years old in 1766. This appears to be a simple typographical error. It also means that Katharina Engel is most likely his mother, since she would have been about 24 at the time of his birth.

His father, August, was about 62 years old at the time of his birth. It is almost a certainty that he was married previously and that Ernst Christian had older half siblings who did not immigrate to Russia with their father and his younger children.

In 1775, the census shows Christina Engel as the wife of August Rusch. She was most likely Ernst Christian's step-mother. Since divorce was rare in these Volga German villages, his father's remarriage appears to indicate that his wife Katharina Engel, Ernst Christian's mother, had passed away.

This census has roughly the correct age for Ernst Christian. Note, however, that his father's spouse has a different name and birth year. This means that his mother passed away some time before 1775, and his father remarried a woman named Christina.

Ernst Christian married Anna Maria Müller by the end of 1775, after the census was taken, and their first child was born the following year. The couple went on to have five children.

ask our community of genealogists a question.
Sponsored Search by Ancestry.com
DNA Connections
It may be possible to confirm family relationships with Christian by comparing test results with other carriers of his Y-chromosome or his mother's mitochondrial DNA. However, there are no known yDNA or mtDNA test-takers in his direct paternal or maternal line. It is likely that these autosomal DNA test-takers will share some percentage (beta) of DNA with Christian: 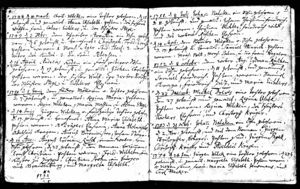