John Ruskin was born 8 February 1819[2] at 54 Hunter Street on Brunswick Square in Bloomsbury, London. He was the only child of John James Ruskin and his wife Margaret. His father was the managing partner in a sherry importing firm[3].

In 1823, the family moved to Camberwell in South London and lived at 28 Herne Hill[3]. Ruskin was largely educated at home by his parents and private tutors and spent a lot of time travelling, before 18 he had visited the Lake District, family in Perth, France, Belgium, Germany and Italy. He loved it all and kept copious notes in many notebooks accompanied by accomplished sketching[3]. He wrote a great deal of competent if conventional poetry.

In 1836, aged 17, he matriculated at Oxford, becoming a member at Christ's College. Something of a loner, he never fitted into university life; his mother lodged in the High Street. In 1839, at the third attempt he won the prestigious Newdigate Prize for poetry. In 1840, as he studied for finals, he was taken ill and it was two years before he returned to take his degree[3].

During that time he answered a challenge from the 12 year old daughter of family friends in Perth, Effie Gray, to write a fairy story. The resulting, King of the Golden River, was the only fiction Ruskin ever wrote.

Ruskin's first published articles on the Lake District were from when he was 15 and other articles on architecture and meteorology followed while at Oxford. But in 1843, at the age of 24 he published the first volume of Modern Painters, an impassioned defense of Turner[3]. Further volumes argued the case for explicitly linking the aesthetic and the divine, arguing that truth, beauty and religion are inextricably bound together. This becomes a defining tenet of the Victorian age.

It is clear that the marriage never truly functioned, Ruskin was aesthetic, distant and cruel. In 1849 she remained in London while he went to the Alps with his father gathering further material for the Modern Painters volumes. On his return he published The Seven Lamps of Architecture, a formative work of the English Gothic Revival.

In late 1849, Effie and Ruskin visited Venice, staying at the Hotel Danieli. For Effie, Venice provided an opportunity to actually socialize, while Ruskin was engaged in solitary studies.

In 1851, John and Effie were living together at 31 Park Street, Mayfair[5]. He is listed as "M.A. Author Of Works On Architecture & Paintings". There were also four servants listed in the household.

Amongst the young painters influenced by Modern Painters were the Pre-Raphaelite Brotherhood. In 1850, John Everett Millais exhibited Christ in the House of His Parents at the Academy. It caused a furore for showing the Holy Family and John the Baptist as ordinary and not terribly attractive working people. Charles Dickens wrote an excoriating review. He was almost as scathing about Holman Hunt's offering which hung beside it. Ruskin, already the pre-eminent art critic of the time, wrote to the Times to defend them[6]. From this a fatal friendship blossomed.

In 1852, Millais painted The Order of Release. It was exhibited in 1853 and was a huge success[7]. John was elected an Associate of the Royal Academy.

Effie, by then aged 24, was the model for the central character of the determined and triumphant wife. Effie had at that point been married to Ruskin for more than four years and was at the end of her tether emotionally. The marriage had never been consummated for reasons that have been speculated about ever since. Either way, Millais and Effie were in love before the painting was finished.

In the summer of 1853 Millais went to Scotland with the Ruskins and painted John's portrait among the gneiss formations at Glenfinlas.

In 1854, Ruskin was added back in the studio in London and by this stage Millais was so in love with Effie that he could barely stand to be in her husband's presence. She had left Ruskin by then, nominally to return to her family in London. In reality she was with Millais.

Effie sued for an annulment on the grounds that John Ruskin was "incapable of consummating" their marriage "by reason of incurable impotency"[8]. It caused a huge scandal but Effie was granted her order of release.

Ruskin, the consummate polymath, continued to lecture on and write about a wide range of subjects including art and, among many other things, geology (in June 1863 he lectured on the Alps), art practice and judgement (The Cestus of Aglaia), botany and mythology (Proserpina and The Queen of the Air). He also traveled continuously, being out of England as much as at home.

Increasingly he saw himself as foremost a social reformer and in 1860 he published Unto This Last, a sharp critique of Victorian capitalism. It becomes an important text both for the founding of the Labour Party and for Mohandas Gandhi.

I will give unto this last, even as unto thee. Is it not lawful for me to do what I will with mine own? Is thine eye evil, because I am good? So the last shall be first, and the first last: for many be called, but few chosen. — Matthew 20 (King James Version)

In 1869 he was appointed the first Slade Professor of Fine Art at Oxford, the first art professorship in the world.

In 1871 Ruskin was at 163 Denmark Hill[9], living with his mother, Margaret, and a cousin, Joanna Agnew, as well as six servants. He is listed as the Slade Professor. Later that year his mother died at the age of 90, Ruskin lost the dominant force in his life and his anchor.

In 1871, Ruskin purchased the then somewhat dilapidated Brantwood house, on the shores of Coniston Water, in the English Lake District, paying £1500 for it. Brantwood was Ruskin's main home from 1872 until his death.

In a July 1877 letter, Ruskin launched a fierce attack on paintings by James McNeill Whistler exhibited at the Grosvenor Gallery. He particularly disliked Nocturne in Black and Gold: The Falling Rocket. Ruskin accused Whistler of "asking two hundred guineas for flinging a pot of paint in the public's face". Enraged, Whistler filed a libel suit against Ruskin. Whistler won the case, which went to trial in the ailing Ruskin's absence, but the jury awarded damages of only one farthing to the artist. Court costs were split between the two parties and Ruskin's were paid by public subscription while Whistler was bankrupt within six months. The episode severely tarnished Ruskin's reputation and he retreated more and more to the Lake District.

In 1881, the census[10] gives us a picture of Brantwood: Ruskin was there with his cousin Joanna, now married to the landscape artist Arthur Severn together with their latest baby. There is also an art student visiting: Laurence Hilliard. There are five servants in the main house. In the nearby Lodge was Ruskin's valet and his family together with two more Severn children and three more servants. The estate was hardly quiet! Ruskin listed himself as 'Author'.

In 1891, the census[11] reveals little change. Ruskin was still at Brantwood. Joanna, Arthur and three of their children were there. His valet and his four children occupied the lodge. There was a governess for all the children. There were also seven more servants including a nurse as Ruskin was now 72 and failing.

Ruskin died on 20 January 1900 at Brantwood of influenza. He was buried in St Andrew's Churchyard in Coniston[12]. Joanna inherited his estate having been his principal carer in his final years. 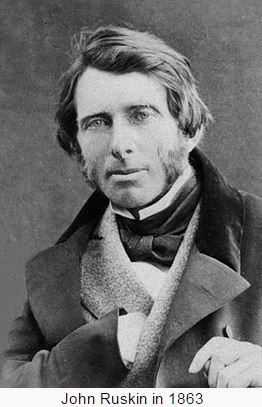 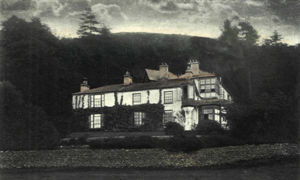 Brunswick Square before demolition in 1969. No 54 would be on the far right. 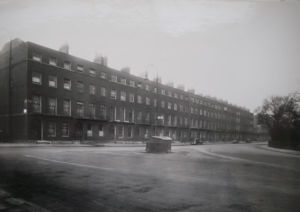 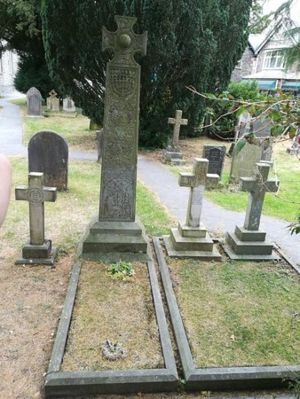 Kinnoul Church across the River Tay

John is 22 degrees from Donald Howard, 17 degrees from Julia Howe and 16 degrees from Henry VIII of England on our single family tree. Login to find your connection.