Lillas Russell was born 23 March 1842 in [1].Stonehouse, she [2] Married Andrew Thompson on the 1 June 1860 they were married by Rev H.A Paterson at the Presbyterian Church at Stonehouse Lanarkshire .Andrew was 22 and Lillias was 17 ,both Andrew and Lillas gave their occupation as Hand- Loom Weavers ,Andrew mixed fabrics and Lillias was a pin-winder (1861 census)

Regarding the spelling of Thompson on the birth and Marriage certificates for Andrew and his parents the surname is Thomson ,Andrew changed the spelling once he arrived in Australia,all the births of Andrew and Lillias Children after 1864 are listed as Thompson.

The first of Lillias's family to emigrate to Australia, was her eldest sister Janet , who at 19 years old ,accompanied her half brother, David Shearer and family . They reached Sydney on the vessel "Fortune" , arriving 1853.

It was mainly their glowing reports , of the country and the opportunities available, that encouraged the rest of the families to follow. There could be a number of other reasons Andrew and Lillias immigrated to Australia!. The end of the old cottage industry, because of the industrial Revolution , the decline of the English Wool industry and there was also land available under the Robertson free selection act 1861, The Russell's, and Thompsons also had family in Australia.

Other family members that immigrated to Australia at the same time , were her parents, Gavin and Janet Russell , sister's Mary Hamilton and family, Robina Andrews and family , also James Gilmour, a half brother and his wife and daughters. James was the son of Janet Russell by a former partner. (After arrival James changed his Surname ,to that of his Half-Brother David Shearer).

The family left Plymouth on the 5 November 1863 on the "Sirocco" ,they arrived Sydney on the 28 January 1864 . The voyage took 84 days , Andrew and Lillas's daughter Janet , was born on the voyage as were Charles Hamilton ,and Lewis Andrews. Some of the families lived in Maitland New South Wales for a while , with other members moving to the Singleton Area , to join Lillas sister Janet Richards and the Shearer family , both these family now owned large parcels of land in the Hunter Valley New South Wales.

Andrew and Lillias moved to Wee Waa New South Wales, as did Andrew and Mary Hamilton . Andrew and Lillias bought a property called Woodlands ,Lillas's husband Andrew died in 1889 she was 46 years old . Lillas is mentioned as being one of the people responsible for providing the finace for the new Presbyterian Church in Wee Waa .

In the Thompson Family tree book written by Helen Hayes it states !

David her son was riding home and fell off his horse he tore a hole in his overcoat ,Lillias made him go and find the piece so she could patch the hole

one of Lillias relations who had drawn a selection near Narrabri New South Wales went to see her at Woodlands ,to ask for advice or maybe a loan Lillias replyed I'll give you some advice you have come to Australia to make a new start Don't buy hay in drought buy a knife and hang the skins on the fence thats how I make Woodlands work.

Lillias[3]died in 1916 at Woodlands when she died all of her children had their own land , there is nothing left of Andrew Thompson's head stone it was vandialised years ago but Lillias has a very elaborate[4]headstone that reads

In Loving Memory of our dear Mother Lillias Thompson

Who depatred this life at Woodlands 31 January 1916

Information about Andrew and Lillias Thompson early life in Scotland
and voyage to Australia
From the Thompson family Tree Book.
by Helen Hayes.

Lillias and her 4 sisters were born under their fathers surname RUSSEL, but in the 1841 census of Scotland, the family was entered with the surname RUSSELL.(perhaps a mistake by collector) Since then the Russell name has been used, including the 2 boys births (1844 & 1848)

Thanks to Terry Wright for starting this profile.

Is Lillias your ancestor? Please don't go away!

ask our community of genealogists a question.
Sponsored Search by Ancestry.com
DNA Connections
It may be possible to confirm family relationships with Lillias by comparing test results with other carriers of her mitochondrial DNA. However, there are no known mtDNA test-takers in her direct maternal line. It is likely that these autosomal DNA test-takers will share some percentage (beta) of DNA with Lillias: 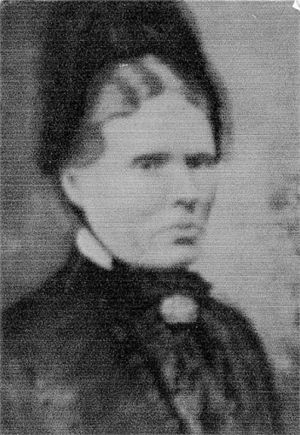 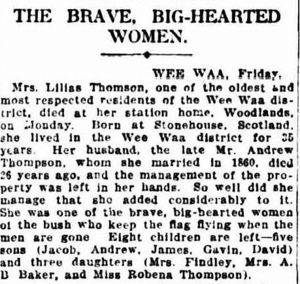 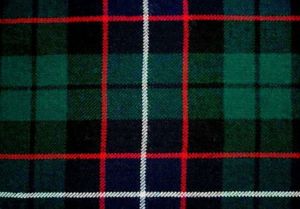 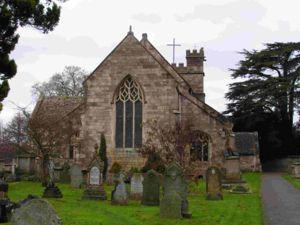 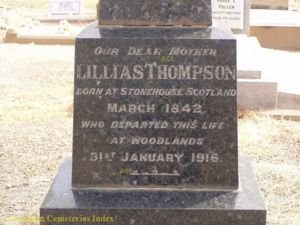 Liz (Noland) Shifflett
update - done. you can delete this comment (unless you want to keep the G2G link)

Hi! The Migrating Ancestor 75px flag template used on this profile has been retired & needs to be edited. For details, please see https://www.wikitree.com/g2g/490020/need-help-editing-profiles-using-a-retired-template -