Dorothy was married twice, first to a Railway Express Agency employee, Daniel J. Sullivan. Together they had six children. She later married Dominick Pirone, a New York contractor with whom she had three children. Together they lived in Durham, Connecticut and raised Arabian horses. Dorothy died at the age of 68, after penning her book My Dad, The Babe. She is survived by four daughters, a son and 12 grandchildren.

Sponsored Search by Ancestry.com
DNA
No known carriers of Dorothy's DNA have taken a DNA test. 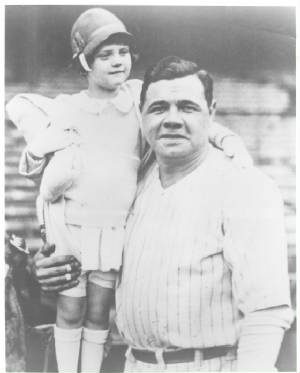 Maria Maxwell
Sexton-2781 and Ruth-4 do not represent the same person because: Totally diferent people - one male one female.
posted Feb 26, 2018 by Maria Maxwell

Maureen (Henigan) Rosenfeld
HI, Could one of you merge Sullivan-4 (Daniel J. Sullivan) into this profile?