John Joseph Patrick Ryan (December 30, 1920 – January 21, 1998), best known by his stage name, Jack Lord, was an American television, film and Broadway actor, director and producer. He was known for his starring role as Steve McGarrett in the CBS television program Hawaii Five-O, which ran from 1968 to 1980.

John Joseph Patrick "Jack Lord" Ryan was born 30 Dec 1920 in Brooklyn, New York City, New York, United States. He was the son of William Ryan and Josephine O'Brien.[1] He was a second and third generation American, having immigrants on both his paternal and maternal side from Ireland.

John's father was employed by a steamship company and as John grew up his father worked his way up the ranks to the executive level. His mother owned a fruit farm in the Hudson River Valley, where John learned to ride horses. His father gave him the opportunity to go to sea, where he painted and sketched images of places he traveled. Upon graduation from high school, he continued his education at the Merchant Marine Academy and upon graduation, went on to New York University and received a Fine Arts degree.

Being in his early twenties at the onset of World War II, he spent his first few years of the war in the U.S. Army building bridges as an engineer and the latter years as a Merchant Marine. It was here he began making training films for the troops and began to consider acting for a career. He also had a child in 1942 with the woman he would later marry (in 1944), Ann Willard. He only saw his infant son, John Joseph Ryan, once during the war, and John and Ann divorced in 1947. He married for a second time in 1949. His second wife, Maria de Narde, was a fashion designer and her parents were both from France.

When he returned from the war, he began attending acting school and took on roles on the stage. Because the name John Ryan was already taken, he took on the name Jack Lord as a combination of names from his family tree. He landed his first movie role in 1949 in a movie called The Red Menace. By 1954, he had 3 films under his belt, was breaking into television roles, and had his first role on Broadway. He played Slim Bradley in The Travelling Lady on Broadway and won the Theatre World Award for his performance. His career had begun to soar.

Through the rest of the 1950's, he continued with steady work on film, television, and the stage. His work as an actor was definitely noticed. In the late 1950's, he was considered for the role as Elliot Ness in the television series The Untouchables, but lost out to Robert Stack. In the early 1960's he was given the role as Felix Leiter in the 1962 James Bond movie, Dr. No. This has the potential to lead to future movies, but his demand for more money and a larger role made the directors decide on a different actor. In 1963, he landed a lead role as Stoney Burke in the series of the same name. Unfortunately, the series only lasted a year. Around 1966, he was considered for the lead role as Captain Kirk in the upcoming Star Trek series, but made demands for more money than Roddenberry was willing to provide, so William Shatner was given the role. Around 1968, he was cast as Steve McGarrett in the new Hawaii Five-O television series and it was this role that he is most well-remembered for today.

Hawaii Five-O would remain on the air for 12 years, and Jack Lord not only starred in the show but grew in influence over his role and the direction of the show. His contract allowed him large control over everything and he became involved in every aspect - from the way his character was portrayed, to the types of scripts he would accept, and even to the car he would drive. When the series creator died in 1974, Lord assumed an even larger role, becoming executive producer at that time. When the show was finally cancelled in 1980, it was the longest running police drama in history at that time.

After Hawaii Five-O, Jack and his wife Marie retired to a home in Hawaii, where they spent time with painting, photography, and creating jewelry. He retired from acting and spent his time with his wife and his artistic side. He never returned to acting, and lived out his life in the state that had adopted him. He died of congestive heart failure at his home in Honolulu, on January 21, 1998, at age 77.[2] 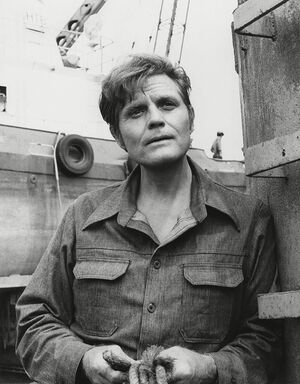