Do check out the Salazar's main page at Space:The_Salazars_-_Welcome_Page.

posted 22 Feb 2009 by Anonymous Salazar
Anonymous Salazar
1940 - I don't remember attending kindergarten. Maybe there was no kindergarten then. If there was we would not have been able to afford it. I can't remember what year we went to Grade One at Bacolod East Elementary School which was on Gonzaga St. in front of Diaz Electric where my aunt Charet used to work. Merv and I went to school there with Teresita.

Our house then was at the back of then Manila Trading and the only one standing there at that time. From our house in that block we can only see two other houses - the house owned by the Torres family on First St. and the house owned by the Gonzaga family on Third St. - the house later occupied by Japanese soldiers as their headquarters. (They were very nice to us kids and whenever we would go there we had the run of the place and they would give us Japanese foodstuff every time - except for one day when they would not let us in because one of the soldiers was killed and they were in mourning).

Teresita was about my age and was the daughter of Mariano, one of our neighbors across the canal in the wooded area from our house. We could not see Mariano's house as it was in the wooded area but I remember well their old nipa and bamboo house. I was seated in their long bamboo bench looking out the window - one of those windows which you just push out with a long bamboo pole and anchor the pole at the window sill to keep it open. I fell off this bench and landed on the floor on top of their dog lying there - and got my first dog bite.

Merv and I usually cut classes and play under the school building with some other boys. There was a clearance of about 3-4 feet from the ground to the floor of the school building so we had plenty of space and they could not hear us from above. We would play with those bugs which made their homes burrowing in the fine sand or we would play with marbles in a game called "palmo." At about 9 or 10AM Merv and I would eat our lunch balon (we would be lucky if we get 5 centavos balon at that time) and would go hungry for the rest of the day. I remember then that the teacher would always lift the girls' skirts to check if they are wearing underwear. Our teacher was Mrs. Fabrica and she lived near the school. She's the only teacher I remember from this school. Dad, December 2002

Blossoms"? That's the first time I heard of it - but you know what? It sounds good and so appropriate. Yes, we have a lot of blossoms - not part of the family by affinity or consanguinity and yet very close and loved by all in the family.

I'll start with Mayang. She was our maid back in Second St., Bacolod City in 1940 when I was 4 up to 7 years old. When Mamang (my mother Angeles Vallega or "Angeling" died in July, 1943 and Papang remarried in 1944 there was a great change. Mommy (my stepmother Noemi Baylon or "Mimi" at that time assumed the usual role of stepmother and us boys had more than our share of slaps and body pinches which left our ears bloody, what would be known now as child abuse, but in those days they just called it disciplinary measures. We were not treated this way by Mamang so we were really traumatized and Mayang just would not stand for it. She defended us at every chance - and this was the reason she was fired.

Papang was busy at work as a clerk at the City Auditor's Office in Bacolod City and left all the household decision to Mommy. When we started moving from house to house around Bacolod after our house was burned down by Japanese soldiers, Mayang was no longer with us. I never did learn Mayang's real name. In this case only us kids love her, Mommy hated her. I never found out how Papang felt about her. There were days when I was frustrated by her. At that time around 6 years old, I was already reading the World War I supplement found in the beginning of I think was a geography book. I would run to her when I come across a word I can't read - and she just was not of much help in that department. Dad, October 2002

posted 22 Feb 2009 by Anonymous Salazar
Login to add a memory.
Is Alan your relative? Please don't go away!

ask our community of genealogists a question.
Sponsored Search by Ancestry.com
DNA
No known carriers of Alan's DNA have taken a DNA test. 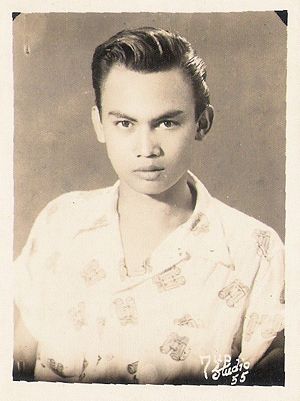 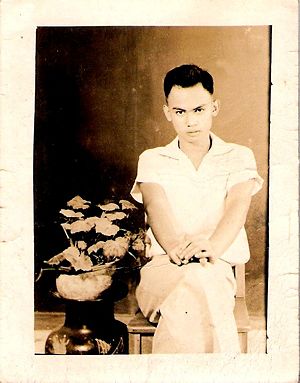 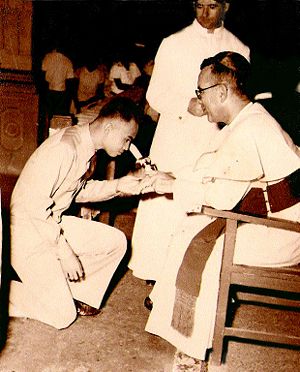 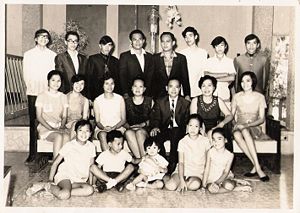 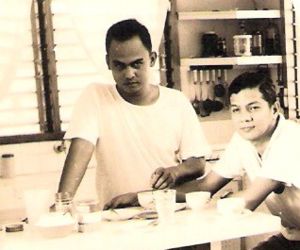