Please do not change parents, wives, birth dates, or children before reviewing the Research Notes below.

Because of the long length of this census entry, I have pared down the census entry shown here to include only the head of the household and wife, Peter Saltzmann's grandparents, and his immediate family.

The sources used to create this profile for Johann Peter Saltzmann were consulted in this order:

These estimated birth years are all close enough to consider them a match for Peter Saltzmann of this profile.

The 1897 Grimm census adds another Georg Peter Saltzmann to the mix, this one born in 1867 in family #601. He was 30 years old in 1897 with a wife named Katharina Elisabeth and four children: Margaretha, Christian Jakob, Maria, and Karl. These match the names of his oldest children in the 1910 United States census. He was 43 years old in 1910, making him a match with the Georg P. Saltzmann in the 1897 Grimm census who was born in 1867.

This Georg P. Saltzmann and the Peter Saltzmann of this record both immigrated to the United States in the early 1900s.

Mentioning Friedrich Salzmann in his father's profile is important because in his death record, his parents are identified as Peter Saltzmann and Elisabeth Fritzler. It is most likely that the only reason people were able to identify his mother's last name at birth is from this death record. So Elisabeth Fritzler should be connected to Peter Saltzmann as his wife. Instead, she is connected to Georg P. Saltzmann. That confusion is probably what triggered someone adding Friedrich as a child to Georg P. Saltzmann, and thus a significant error was born.

Since Peter Saltzmann and his wife are both listed in the 1930 United States census, living in their son Friedrich's household, and he's not listed in the 1940 census, he probably died some time before 1940.

It's very important that this profile be as correct as possible. Please do not change parents, wives, birth dates, or children before reviewing these Research Notes. Feel free to contact the profile manager for more information. 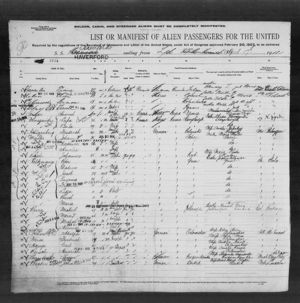