When Henry was about sixteen years old, he sailed on the Mayflower to Plymouth with his uncle and aunt, Edward and Ann (Cooper) Tilley.[2][5]

Henry received one acre in the 1623 division of land as a Mayflower passenger and a division of cattle in 1627. He was the fifth person in the fifth company of Mr. William Brewster.[6]

Henry Samson married Anne Plummer at Plymouth on 6 February 1635/6.[7] Henry and Anne had nine children. Anne died sometime between December 24, 1668, when she acknowledged a deed, and December 24, 1684, when her husband Henry made his will.[2]

Henry Sampson volunteered to join the fighting against the Pequot Indians, in 1637, but the Pequots were defeated before the Plymouth troops were needed.[2][9]

During his lifetime, starting about 1637/8, Henry acquired land through purchase and town grant. During the 1660s he specifically looked for land for his children.[14]

On 24 Dec 1668 Henry Sampson of Duxborough sold land in Namasket to Edward Gray. His wife Ann acknowledged the deed.[2]

Henry Sampson of Duxborough, planter, deeded land received from the town of Duxbury to his daughter Hannah Holmes, wife of Josiah Holmes on 20 May 1675.[2]

Henry made his will, signing by mark, on 24 10th month (December) 1684. In it, he mentions sons: Stephen, John, James, and Caleb; and daughters: Elizabeth, wife of Roberd Sprout; Hannah wife of Josias Holmes; a daughter, wife of John Hanmore; Mary, wife of John Summers; and Dorcas, wife of John Bony. Son Stephen was the executor and friend Mr. Wiswall was the overseer. The will was proved on 5 March 1684/85, and the inventory was taken on 24 12th m (February) 1684/5. The estate was valued at £106 14s, of which £70 was in land at Dartmouth. The inventory also contained what was referred to as a library.[16][2]

This is the order mentioned in Henry's will (sons then daughters). The Mayflower Society Five Generation Book and Anderson's Pilgrim Migration each list a different order and have different estimated births.

Y-DNA Results I-FTB4532[17] Previous Y-STR testing through the Mayflower Society DNA Project and the Pilgrim Henry Samson Kindred DNA Project has identified a 111 Y-STR haplotype for the Mayflower Samson lineage, which belongs to the I-M223 Y-DNA haplogroup. Nevgen.org further refines this prediction to fall under I2a2a I-M223>P222>CTS616>CTS10057>Z161>FGC3575>S2452>L801>Z165>CTS1977>Y4946>BY526 (Y8935) with 100% probability. NGS/WGS testing will be able to confirm this assignment and further refine the clade. NGS/WGS testing Descendants of two different sons of Henry Samson and two descendants of his cousin Abraham Samson have taken the Big Y test. Their results confirms the haplogroup prediction from NavGen and assigns the two branches to a further subclade: Y12052>FTB708. Furthermore, the descendants of Henry Samson fall under the FTB4532 subclade of FTB708 while the descendants of Abraham Sampson fall under the FTB635 subclade of FTB708.

The FTB4532 mutation must have occurred either in Henry Samson himself, or his father, James. Likewise, the FTB635 mutation occurred within either Abraham Sampson or his father Lawrence. James and Lawrence were almost certainly brothers, but this Y-DNA evidence itself cannot prove this exact relationship. 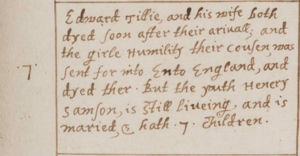 Faylene Bailey
This is an update from American Ancestors from their newsletter. I don't have a subscription, but this gives an update of their biographical sketch of Henry Samson Henry Samson (bef.1604-1684) (My 9th great grandfather). "American Ancestors DataBase News - Henry Samson part 2 Added to Mayflower Families Fifth Generation Descendants, 1700-1880" It incudes "part three of Henry Samson volume 20, is the final part the searchable database of authenticated Mayflower Pilgrim genealogies, Mayflower Families Fifth Generation Descendants, 1700-1880" https://dbnews.americanancestors.org/?s=Samson
posted May 27, 2021 by Faylene Bailey
edited May 27, 2021 by Faylene Bailey

The announcement is great news, as it means that the fifth generation of Henry's descendants will now be available for research to NEHGS/AmericanAncestors members. I don't believe there is any update to Henry himself, just access to the "Silver book" pages for that later generation. As far as I know, the first 4 generations in the series are still only available by finding a copy of the book. Part 1 of the book, which would profile Henry, has not been revised since the edition in 2000, which was used for the most recent update to this profile.

Faylene Bailey
Thanks Bobbie! I hope some good information is gleaned from it. I so wish I could purchase subscriptions from a lot of genealogy sites like that, but not in the cards for me.
posted May 27, 2021 by Faylene Bailey