"Saumarez was born at St Peter Port, Guernsey to an old island family, the eldest son of Matthew de Sausmarez (1718-1778) and his second wife Carteret, daughter of James Le Marchant. He was a nephew of Captain Philip Saumarez and John de Sausmarez (1706-1774) of Sausmarez Manor. He was also the elder brother of General Sir Thomas Saumarez (1760-1845), Equerry and Groom of the Chamber to the Duke of Kent, and afterwards Commander-in-Chief of New Brunswick, and of Richard Saumarez (1764-1835), a surgeon and medical author. Their sister married Henry Brock, the uncle of Major-General Sir Isaac Brock and Daniel de Lisle Brock. Many of de Sausmarez's ancestors had distinguished themselves in the naval service, and he entered it as midshipman at the age of thirteen. Upon joining the navy, he dropped the second 's' to become de Saumarez." 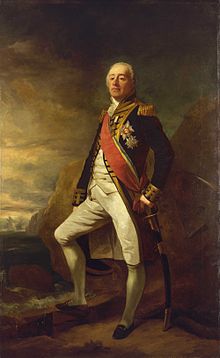