Sometimes referred to as "The Ensign," and/or "Ancient Planter"
Disputed wife and family

Thomas was born about 1594-95 in England, the son of unknown parents.

Thomas Savage has been disconnected from unproven parents, Sir Arthur Savage and Jane Stafford Savage. Please contact me and/or the profile manager if you have reliable evidence for parentage. Thank you. (Patricia Prickett Hickin, 14 April 2019.)

Known as "Ancient Thomas Savage", he arrived in Jamestown Virginia, with the "First Supply" on the ship known as "The John and Francis", in January 1607/08.

"Savage may have been present when Captain Samuel Argall kidnapped Pocahontas in 1613, and he played a critical role in negotiating an end to the fighting between the English and the Pamunkey tribe in March 1614. That May—after the marriage of Pocahontas to John Rolfe effectively ended the First Anglo-Powhatan War—Savage returned to the Indian capital with Ralph Hamor, secretary of the colony. Their mission was to arrange a marriage between Powhatan's youngest daughter and Sir Thomas Dale, the governor of Jamestown. According to Hamor, the paramount chief greeted Savage warmly, but scolded him for escaping: "My childe you are welcome, you have bin a straunger to me these foure yeeres, at what time I gave you leave to goe to Paspahae [Jamestown] … to see your friends, and till now you never returned." Despite the warm reception, Hamor and Savage's attempt to arrange the marriage was unsuccessful." from EncyclopediaVirginia.

About 1623, when he was in his later twenties, he married Hannah 'Ann' Elkington.

The Encyclopedia Virginia has this to say about Thomas's wife:

"In or around 1621, Savage had received . . . a large tract of land on the Eastern Shore containing an estimated 9,000 acres. (This tract of land would become known as Savage's Neck.) About two years later, he married a woman named Hannah (sometimes Ann), who had come to Virginia at her own expense in 1621 on the Seaflower. The two had a son, John, around 1624. Savage's prosperity in the fur trade is reflected in the records of the day: by early 1625, Savage was recorded as possessing a house, a barn, a boat, and two servants; two years later, he was the owner of a 150-acre plantation, Savages Choice.[2]

Other sources add another son and a daughter:

Click here for a family website, SAVAGE ANCESTRY, by R. Blair Savage, which argues that Thomas's first wife was a native American and that Hannah was Thomas's second wife and the step-mother of his son.

" Hello Patricia, I just wanted to mention in case it might be helpful to you that I have done a great deal of research on Thomas Savage as he is my 9th great grandfather. He and his children are listed through many sources as being descendants of Chief Powhatan. As you know he was married to Hannah Tyng. In the National Archives there is a note that Hannah Tyng was the English name for Indian Princess Hannaniting though they aren't clear about what tribe she is from. Since Thomas Savage is listed as having been married to an "Unknown" daughter of Powhatan I have come to believe that Hannah Tyng could only have been Princess Hanniniting Powhatan, the apparently forgotten daughter of Chief Powhatan. I think she is often confused with the Hannah Tyng who married a Thomas Savage at a later date in Boston. So I think most people who are doing the genealogy of Thomas Savage of Jamestown have his wife's genealogy all wrong because she has been confused with the other Hannah Tyng who is from a completely different family. Paula Grimes Kenney."

He was probably the first permanent white settler on the Eastern Shore].

Having added the role of planter to his resume, Savage continued to serve as an interpreter until his death.

Thomas died of unknown causes on 24 September 1633 in Savage Neck, Accomack County, Virginia, while he was still in his thirties.

He was survived by his son, John, who inherited his land, and his wife, who by 1638 had married a planter named Daniel Cugley.

Looks more likely to me that it would be Debedeavon's people. Powhatan sent young Thomas away to live with them.

Fora larger view of the image below, click here.

Bio: Thomas Savage, Ensign - He came to Virginia in the first supply ship, the "John and Francis" with Captain Christopher Newport, who arrived at Jamestown on 8 January 1608. He was the first permanent white settler on the Eastern Shore. In 1931, some of the descendants of Ensign Thomas Savage, erected a large, bronze plaque in the Old Church in Jamestown, Virginia to honor him. It states the following: "Thomas Savage, Gentleman and Ensign. The First White Settler on the Eastern Shore of Virginia. Hostage to Powhatan 1608; His Loyalty and Fearlessnss endeared him to the Great King who treated him as his son, while he rendered invaluable aid to the Colony as Interpreter. Greatly beloved by Debedeavon, the Laughing King of the Accawmackes. He was given a Tract of Nine Thousand Acres of Land known as Savage's Neck. He obtained food for the starving Colony at Jamestown through his friendship with the kindly Eastern Shore Indians. A relation of his voyages on the Great Bay in search of trade for the English was read before the London Company at a Court held July 10th, 1621.John Pory, Secretary of the Colony says, "He with much Honestee and Good Success, served the Publique without any Publique recompense, yet had an arrow shot through his body in their service."[9] 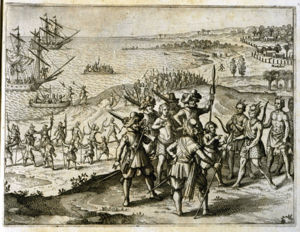 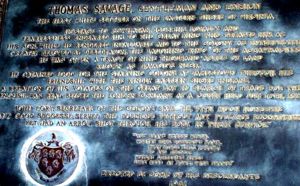 Leave a message for others who see this profile.
There are no comments yet.
Login to post a comment.
Linda (Noland) Layman
The book "Houses Virginians Have Loved," by Agnes Rothery, 1954, states: "Thomas Savage (age 13) came to Virginia in 1608 with Christopher Newport and so caught the fancy of Powhatan that it was arranged that the English boy should be exchanged for an Indian one. Young Savage must have been an attractive lad, for when Powhatan's brother saw him, he too coveted him. Thereupon, Powhatan, who chose to call the boy Newport, sent him to live with Debedeavon, the 'Laughing King' who was chief of all Accomack. Once again young Savage found favor, and Debedeavon gave the south side of Wissaponson to his adopted son, Thomas Savage. A patent for this tract of nine thousand acres - the largest patent then on record - was issued in 1664 to Captain John Savage, the son of Thomas, and since then the name has kept alive through numerous descendants. John Savage's first wife was Ann Elkington, and in her honor the present house was built in 1799 and named Elkington."
posted Aug 18, 2020 by Linda (Noland) Layman

Malcolm Hoare
How do you know that the Thomas Savage born in Cheshire, England in 1594 is the same Thomas that came over to Jamestown.

The surname Savage was very common in England at that time, especially in the Norfolk and Suffolk areas. Also you have two of his children born before the marriage date of 1623 - 1627.

Thom Anderson
Removed Sir Arthur Savage and his wife as parents. No indication of that relationship and even quoted sources for this Thomas Savage indicate that there is no information on who his parents were. The Thomas Savage who is a son Sir Arthur Savage and Jane Stafford was knighted in Cadiz and married to Dowglas Snagg. They had three children. This certainly excludes him from having been on a ship to America at age 13.
posted Jul 13, 2017 by Thom Anderson
M (McQueen) M
Savage-2191 and Savage-1843 appear to represent the same person because: same person
posted Apr 22, 2016 by M (McQueen) M
M (McQueen) M
The birth date for this Thomas is either wrong or he did not have a child named Thomas. Chris do you have any sources to share?

Ive posted some sources but they prove what I just stated.