Project protected by PGM because of known common errors in his ancestry. Specifically, he is not the son of Thomas Savage and Elizabeth Darcy as commonly said. Please see the errors section and this G2G for more details.

Captain Thomas Savage was born about 1607/8.[1][2] at Rocksavage, Chester, England. He sailed from England aboard the "Planter" in 1635.[1][3] He is sometimes said to be the son of Thomas Savage and Elizabeth Darcy, but this has been positively disproved. From the coat of arms on a contemporary painting and the same arms found on his gravestone, he is likely a member of the family of Savage of Rocksavage in Cheshire, but his exact connection to the family has not been found or proven.

Although he may not have stayed around long, this is almost certainly the same Thomas Savage who signed the Portsmouth Compact in 1638. Most likely, he followed at the urging of his wife who was the daughter of Anne Hutchinson who was involved in the Antinomian Controversy.

Capt Thomas Savage was marryed to Mary Simmes the daughter of Zechariah Simmes Pastor of the Church of Christ in Charlestowne pr Mr Increase Nowell 15: 7mo.: 52.[9]

Children of Thomas Savage and his first wife Faith Hutchinson include:[1]:

Children with his second wife Mary include[1]:

He was Christened there in 1611. [citation needed]

There is a Thomas Savage christened on Aug 1611 in Trowbridge, Wiltshire, England who was the son of John Savage and wife Alice. [11]

Interestingly, there is evidence showing that Captain Thomas Savage does belong to the family of Savage of Rock Savage. In the background of his portrait (painted c1679)is a coat-of-arms Argent, six lions sable. [14] These same arms are also on his tombstone. The arms are those of the Savages of Rock Savage and Clifton, Cheshire and were apparently adopted by Sir John Savage (d. 1550). [15]

Parents and origins: Savage, in his Genealogical Dictionary of New England, stated that Thomas Savage (his own ancestor) was the son of"William of Taunton, Co. Somerset, blacksmith, where the name prevails in the parish reg. for the whole reign of Elizabeth had been apprent. at Merchant Tailors, London, as the comp. rec. prove, in the 18th yr. of James, 9 Jan. 1621," [16] No evidence has ever been found to back up this assertion, though it also not clear that this possibility has been fully researched. The heraldic evidence noted above, however, would seem to indicate that Captain Thomas Savage belongs to the family of Savage of Rocksavage and not to the family of Taunton, co. Somerset. 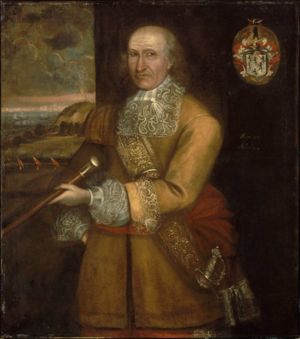 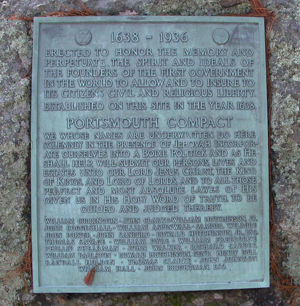 Beryl Meehan
Thomas Savage, aged 27, a tailor, in emigration list 6 April 1635 and he is one of a group who bought certificate from the minister at St Albans, Hertfordshire 2 April 1635 Page 831 Nonconformity in Herts: Being Lectures Upon the Nonconforming Worthies of St ...

By William Urwick (this certificate is mentioned in North American Family Histories) https://books.google.ca/books?id=fKBhAAAAMAAJ&pg=PA137&lpg=PA137&dq=certified+by+minister+at+st+albans+hertfordshire&source=bl&ots=JTLLzoRaIX&sig=ACfU3U19OSGovu4_zAKPu9FiguExb525KQ&hl=en&sa=X&ved=2ahUKEwi3o_Xy7YzsAhUFuZ4KHeTTB2g4ChDoATAIegQICBAB#v=onepage&q=savage&f=false

posted Sep 28, 2020 by Beryl Meehan
Joe Cochoit
This is the record of his immigration and there are references to it in the biography.
posted Sep 29, 2020 by Joe Cochoit

Beryl Meehan
Bio notes do not mention the certificate from the minister at St Albans.

He is certainly not the son of Sir Thomas Savage, 1st Viscount Savage and Elizabeth Darcy, Countess Rivers suo jure. They had a son Thomas but he married Elizabeth Whitmore and died in 1655.

His parents need to be disconnected. Thank you.

Cheryl (Aldrich) Skordahl
Joe, if the Viscount and Countess were ever disconnected as parents, they've returned. Will you handle this disconnect, with notes please? Then I think this profile needs PPP.

Beryl Meehan
Thanks Cheryl and Joe. My comment worked!

p.s. perhaps update birth place, and are those images for this ThomasÉ

Jillaine Smith
Beryl and others, be cautious with North America, Family Histories as a source. At best it's a finding aid. Hopefully, it cites sources for its data and we can track down those.
posted Sep 28, 2020 by Jillaine Smith

Elizabeth (Hart) Hyatt
I am supporter of deferring to the work of Robert Charles Anderson. However, the other items may be secondary sources but they are sources. However, they had the format from a GEDcom import with bad links. I just cleaned them up and added a few so it would be easier for a reader to find them when searching.
posted Jan 21, 2016 by Elizabeth (Hart) Hyatt
Chris Hoyt
Thomas Savage that married 1st Faith Hutchinson, 2nd Mary Symmes, died and is buried in Boston, MA. See: Great Migration 1634-1635, R-S. (Online database. AmericanAncestors.org. New England Historic Genealogical Society, 2012.) Originally published as: The Great Migration, Immigrants to New England, 1634-1635, Volume VI, R-S, by Robert Charles Anderson. Boston: New England Historic Genealogical Society, 2009.
posted Jan 16, 2016 by Chris Hoyt
Chris Hoyt
Savage-2516 and Savage-91 appear to represent the same person because: These are duplicates of the immigrant ancestor Major Thomas Savage of Charlestown, same dod. Died at Boston. Please merge Savage-2516 into LOWER Savage-91. Thanks
posted Jan 16, 2016 by Chris Hoyt

I noticed that Thomas has a wife with a "Private" Privacy level because she was born in 1920, which is probably a typo as her husband was born in 1611.