François Savoie aka Savoye
Born about 1621 in France

NOTICE: this profile is protected by the Acadian Project because of frequent duplication, attempts to add unsourced parents or is an historically important person (patriarch of the Acadian Savoie family), and is in the Top 100 highly viewed Acadian profiles. Please contact the Acadian Project before making any substantive changes. Thanks for helping make WikiTree the best site for accurate information.

François Savoie is the Ancestral Patriarch of the Acadian Savoie Family

François was born around 1621. [1] Many people say that François was the illegitimate son of Tomaso Francesco, but this has not been proven or disproven. It is most likely the wishful thinking of researchers who want to find a royal connection. Regarding François' location of birth, Stephen White remains silent.[2]

However Massignon[3] speculates that he may have come from Martaizé, near Loudun, France because the name Savoie is among the many Acadian names that are found in the nearby Seigneury d'Aulnay (comprising of the villages of Angliers, Aulnay, Martaizé and La Chausée).[4] However, Francois' birth record has not been found.

François probably came to Acadia around 1643.[5][6] He married Catherine Lejeune approximately in 1651 in Acadia but the exact place is not known.[7][8] Between 1652 and 1670, they had 9 children: Françoise, Germain, Marie, Jeanne, Catherine, François, Barnabé, Andrée and Marie France.[2]

While François and Catherine were raising their family, Port-Royal was captured in 1654 by Robert Sedgwick, who led 300 British soldiers and volunteers.[9]:

"The [French] soldiers at Port-Royal, who numbered about 130 … put up a brief defense against Sedgwick. Setting up an ambush between the landing site of the English troops and the fort, the Frenchmen fired on the attackers but proved no match for the experienced Roundheads. The French soon "took their heels to ye Fort." On August 16 the fort surrendered... Sedgwick granted honourable terms, allowing the defenders to march out of the fort with flags flying, drums beating, and muskets at the ready. The soldiers and employees working at the fort were offered transportation back to France and given enough pelts to cover their wages."[10]

Although the commander of Port-Royal left for France, most Acadians, including the Savoie family, remained in Acadia. They were permitted to retain their land and belongings and were guaranteed religious freedom.[10] Dunn describes life in Acadia during the 16 years of nominal British rule:

"During the years of British rule, most of the Port-Royal population moved upriver away from the town. Using the agricultural practices initiated under D'Aulnay, the Acadians dyked and cultivated extensive salt marshes along the river and raised livestock. Through necessity, residents had reached an accommodation with New England traders who had become their sole source for the goods that they could not produce themselves... New England traders exchanged their goods for Acadian produce and furs... There were seventy to eighty families in the Port Royal area in 1665."

By 1671 the British had ceded Acadia to France and French settlement resumed.[11] In the Port-Royal census of that year, François, 50 years of age, was listed as a plowman. His wife Catherine was 38. There were 9 children between the ages of 2 and 18 in the household.[1] The family homestead had 6 arpents[12] under cultivation and they had 4 cattle. It is not clear where the farm was located. By 1707, their son Germain had a farm upriver at the Belisle Marshes, east of the fort on the north bank of the Dauphin (Annapolis River).

The time and location of François’ death are not known.

“Most of François and Catherine's descendants remained at Port-Royal/Annapolis Royal, but they settled also at Minas, Chepoudy, and in the French Maritimes. At least 14 of their descendants emigrated to Louisiana from Halifax in 1765. More of them could be found in greater Acadia, the French Antilles, France, and especially in Canada after Le Grand Dérangement. ”[13]

Only one son, Germain, had sons of his own and spread the name Savoie in Acadie.

According to Family Tree DNA's French Heritage DNA project, two descendants have taken a yDNA test with resulting haplogroup being R-M269 (the most common European group) and one with R-Z367. These can be found in the YDNA portion of the site, on page 3. the Acadian yDNA project from Family Tree DNA shows the family to be R1B with both entries R-M269.[14]

1667-70 Treaty of Breda cedes Acadia to the French; settlement resumes[17]

Sponsored Search by Ancestry.com
DNA
No known carriers of François's DNA have taken a DNA test. 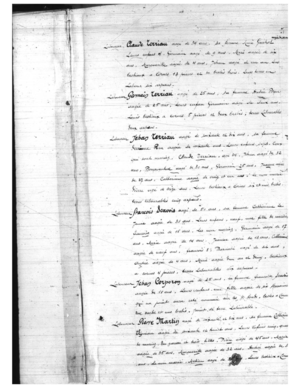 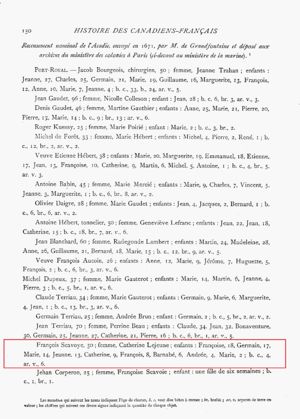 Leave a message for others who see this profile.
There are no comments yet.
Login to post a comment.
Raymond Lafleur
Mary Despres, you posted a video on YouTube with clips copied from the movie "The King" as a hypotheses for a fantastical theory that Francois Savoie is the son of an Italian prince? There is no hypothesis. It is fiction as has been demonstrated so many times by so many Acadian genealogical researchers. Furthermore, we know Francois Savoie's DNA haplogroup is R1b. We also know the Savoia royal family is E3b. I think those making desperate attempts to prove an Acadian ploughman is really an Italian prince, should pour their energies into more positive endeavors.
posted Dec 05, 2021 by Raymond Lafleur
Mary Despres
The Lost Duke of Savoy - A geneological hypothesis on the origins of Francois Joseph Savoie

Danielle Liard
Why is there a Blason des Savoie on the profile? There is no indication in the upload that permission was gotten to reproduce it.

Gisèle Cormier
Thank you for bringing this to our attention. This hypothesis is already mentioned in the biography. That is why Martaizé appeared in the the birth location field which was marked as uncertain. In order to avoid confusion, Martaizé has been removed as place of birth until documented evidence is found.
posted Sep 10, 2020 by Gisèle Cormier
Raymond Lafleur
Correct. I believe the original source for this was linguist Genevieve Massignon in Les Parlers Français D'Acadie. In it, she hypothesizes that many of the Acadians, including Francois Savoie, came from south of Loudun, recruited by Aulnay. She says Aulnay's seigneurie was in the area of Martaize. And she is right. But, someone then extrapolated that to be "Francois Savoie was born in Martaize". A search of the parish register in Martaize shows no Savoie's. However, a search of nearby parishes, including Loudun itself shows about 30 entries for a "Savoie" between 1600 and 1650. However, no "Francois Savoie". The fact that "Martaize" was propagated all over the internet as Francois Savoie's birthplace fueled the "Tommaso di Savoia" is his father fantasy. Because, if there are no Savoie's in Martaize, then Francois Savoie MUST BE the sone of Tommaso di Savoia.
posted Dec 08, 2021 by Raymond Lafleur

Bill Debuque
There appears to be no concensus yet on the rules of evidence that should be applied to establish that Francois Savoie is indeed the son of Tomasso. So far, we have these:

1. Direct Evidence: a. The deathbed confession of Francois himself.

2. Circumstantial Evidence: a. The surname of Francois; b. The timeline of his life; c. The historical context of his migration to the New World; d. The accuracy of other similar oral ancestry claims; d. The autosomal DNA test results on three (3) of his direct descendants (see discussion at Geni).

This is not a criminal case. We do not have to prove anything beyond reasonable doubt.

Currently, however, there appears to be enough preponderance of evidence to conclude that, more likely than not, Francois Savoie is indeed the son of Tomasso.

posted Sep 16, 2018 by Bill Debuque
Raymond Lafleur
1. There is no direct evidence of a deathbed confession of Francois Savoie. Some say it exists via oral tradition through several descendants across a broad range of geography - Acadia to Maine to Louisiana. However, one person seems to be the source of this claim. For it to be even considered, a testimonials would need to be made and documented by those descendants directly. That has not been done. Even then, it would be a stretch to call this compendium of testimonials "direct evidence".

2. The surname of Francois is not circumstantial evidence. Savoie is not a rare or uncommon surname in western France. Of the parish registers indexed and online thus far, there are over 75 individual baptismal, marriage and death records of a "Savoie" between 1600 and 1650 in France, most in the western regions, specifically Maine-et-Loire and adjacent departments; precisely where researchers speculate is the region where Francois Savoie originated and where the Seigneur D'Aulnay recruited from. 3. Autosomnal DNA is useless 13/14 generations back. It works up to about 8 generations. YDNA needs to be performed and has been performed. Francois Savoie is not a match for Tommaso Savoy. 4. It is indeed not a criminal case, it is also not a place of fantasy and wishful thinking. Several serious Acadian genealogists have looked at this - Stephen White, Lucy LeBlanc Consentino, Denis Beauregard, and many others. They all say that any relationship between Francois Savoie and Tommaso Savoy is pure fiction. 5. There is no preponderance of any evidence to conclude Francois Savoie is the son of Tomasso Savoy. None.

Savoie-9 is project protected so it must not be modified other than the merge.

Roland Arsenault
I have removed Tommasco Francesco Savoia as father and created project protected unknown profiles as placeholders to help prevent incorrect parents from reappearing due to merges.
posted Jun 10, 2015 by Roland Arsenault

Vincent Courtney
Savoie-807 and Savoie-9 are not ready to be merged because: Death year varies considerably, and to a lesser extent the feminine form of Francoise used in 807 (which may be just the non-standardized spelling of the period.)
posted Apr 12, 2015 by Vincent Courtney