Caution: Geoffrey has a half-brother named Geoffrey (see below)

Geoffrey held lands in Buckinghamshire, Hertfordshire, Kent, Middlesex, Northamptonshire and Sussex, and also in Normandy.[1] He inherited the Barony of West Greenwich, Kent from his mother.[4] He is recorded in 1224 as having 42 knights' fees in Montgomeryshire, Wales.[1]

Geoffrey's father had granted Sayes Court, Deptford, Kent to the Knights Templar. Geoffrey recovered it in the later 1220s[1] in exchange for giving the Templars property at Saddlescombe, Sussex[1][5]

Geoffrey appears in documents from 1197/8 (when he confirmed a grant of his father's) onwards.[1]

In 1202 Geoffrey was awarded compensation for lands lost to the French king in Anjou.[1]

In 1215 Geoffrey sided with other barons against King John, and was one of the Surety Barons for the Magna Carta.[1][6] A few months later most of his lands were confiscated: they were not restored until he returned to allegiance to the English Crown in 1217.[1]

Geoffrey married Hawise de Clare before 1215.[1] They had three sons:

Geoffrey died in Poitou on 19 August 1230 while campaigning with Henry III.[1] He was buried at the Hospital of St Mary, Dover, Kent, of which he had been a benefactor.[1]

"Geoffrey de Say sat in the baronial camp in an uneasy alliance with Geoffrey de Mandeville, his cousin but also his rival for the inheritance of the de Mandeville earls of Essex. The competition between the two men and their families affords a reminder that there were divisions within the baronial camp as well as between the rebel barons and the king. No more than such other medieval opposition movements as the Ordainers in Edward II’s reign or the Appellants in Richard II’s were the Twenty Five of John’s reign a solid monolithic bloc unhindered by faction or rivalry.

"The two Geoffreys both had a claim on the estates of another namesake, William de Mandeville, third earl of Essex, the last of his line, who had died without issue in 1189. De Say’s claim arose from his grandmother, the long-lived Beatrice de Say, the first Mandeville earl’s sister, who transmitted her rights to her son, while Geoffrey de Mandeville’s claim was inherited from his mother, another Beatrice, the wife of Geoffrey FitzPeter and daughter and eventual coheiress of William de Say II, William I’s son. Geoffrey de Say I, our Geoffrey’s father, obtained a grant of the disputed lands from Richard the Lionheart in 1189, but was unable to raise the huge sum of 7,000 marks (about £2333), which the king demanded as his price. The estates, accordingly, reverted to the king and were awarded instead to Geoffrey FitzPeter, a powerful man and later King Richard’s justiciar. FitzPeter and his wife were confirmed in their possession of the estates by a royal charter granted at Messina on 23 January 1191. The early stages of the dispute are told in a fascinating account in the Walden Abbey chronicle, The Foundation Book of Walden Monastery.

"The younger Geoffrey had started his career under Richard and John fighting in the defence of Normandy and had evidently lost property there when the duchy was finally overrun by the French. As early as 1202 the duchy’s seneschal was instructed to find as much as one hundred liberates of land with which to compensate him for the losses which he had suffered.

"In 1214, after his father’s death, he reactivated the family claim to the Mandeville inheritance, this time against FitzPeter’s son – Earl Geoffrey – taking advantage of his service with the king in Poitou to offer him no less than 15,000 (£10,000) marks for possession. John wrote to the justiciar in England ordering him to take advice on what might be the best course to take. No further action is recorded, and presumably the justiciar did nothing. It is no surprise, therefore, in 1215 to find Geoffrey on the rebel side, aggrieved at his failure to secure justice. In June he was named to the Twenty Five and in November he was involved alongside FitzWalter and de Clare in the fruitless negotiations with the king for a settlement. Siding with Louis and the French, he only made his peace with the royalists after the massive baronial defeat at Lincoln in May. He was not active in the politics of the Minority. In 1219 he went on a pilgrimage to the Holy Land and in 1223 to Santiago de Compostella, apparently in the company of Earl Warenne. He died on 24 August 1230 while campaigning with Henry III in Poitou.

"Geoffrey married Alice de Chesney, whose date of death is unknown, and he left a son William, who succeeded him and lived to 1271."[7] [The marriage to Alice de Chesney is incorrect - see below]

Great care is needed to distinguish between different people of this period with the name Geoffrey de Say. Besides the Surety Baron of this profile there are:

In the Complete Peerage Cokayne has conflated Geofrey with both his father and his half-brother.[9] So do Burke's Peerage[10] and some other secondary sources.

Cokayne in his main entry for Geoffrey ascribes two wives to him: Alice, probably heiress of John de Chesney/Cheyne, and Margery de Briwerre.[9] So does Burke's Peerage.[10] I J Sanders in his English Baronies states that Margery de Briwerre was a wife of the Geoffrey of this profile.[11] So does Cawley.[12]

Confirmation that Geoffrey married Hawise de Clare is given by a charter of about 1235 issued by his widow Hawise de Clare and his son William relating to property in Edmonton, Middlesex. There is also a record dated 1215 of Geoffrey having knights' fees held from the Earl of Clare by "free-marriage".[8]

This profile was revised for the Magna Carta Project by Michael Cayley, finishing 4 December 2019. 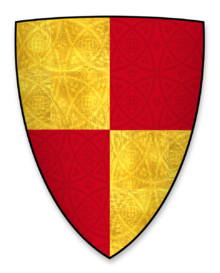 Michael Cayley
I have now finished the main work I intend on this profile, and have added two more children.
posted Dec 04, 2019 by Michael Cayley

Michael Cayley
I plan to start soon on some revision and rewriting of this profile on behalf of the Magna Carta Project.
posted Nov 24, 2019 by Michael Cayley

Michael Cayley
Rather more complicated than that, Isaac. King John accepted the French king as feudal overlord for Aquitaine. And this feudal relationship with France was to cause contention and difficulty till the end of the Hundred Years War.
posted Nov 20, 2019 by Michael Cayley
Isaac Taylor
To the earlier question (2017) Poitou was not France when this man died there.

It was Aquitaine, which was Angevin (ie greater England) under Plantagenet rule until the Treaty of Paris in 1259, I believe. At no time during this man's lifetime would he (or anyone born anywhere outside of the actual borders of France) thought of Poitou as France. (French, sort of. France, no.) So, we shouldn't call it France.

Any more than we'd call "Boston, Massachusetts" part of the United States of America in 1730. Similarly, when say "Alsace" or "Jerusalem" or "Kiev" is changing hands periodically, we need to get the top-level placename/domain right too. Let's do that everywhere, everytime.

The ONLY logically-viable alternative^1 is to exclusively use current geopolitical labels, which would require the complete suppression of all extinct political entities (eg USSR, Holy Roman Empire, Roman Empire, Plymouth Colony, New Netherland etc) and exclusively using today's current boundaries/labels. Or changing the way the site is programmed to support both.^2 Neither of which is not consistent with our "use their conventions not ours" credo.

^1 Or we could just eliminate labels entirely and use latlongs, which would be horrible.

^2 It's not crazy to have separate place fields in the database for What-It-Is-Called-Today (or a geocoded or latlong) and What-It-Was-Called-Then. That would solve a lot of problems. But it's not how things are now.

I added the Royal Ancestry source in your comment to the the profile text under sources.

Royal Ancestry continues the Say lineage back from Magna Carta baron Jeffrey de Say (died 1230), to Eudes the Steward, his wife and father in law. Eudes was Seneschal to William the Conqueror and to Henry I.

That brings the Say lineage from 1180 (birth of Geoffrey de Say) to the reign of William the Conqueror, (invaded England 1066).

A profile at WikiTree that is featured in Magna Carta Ancestry needs to have the accompanying source listed in Royal Ancestry as one of the major sources -- even when the wording in both sources is the same. This is so that descendants may find the rest of the lineage, going back to King William I.

Liz (Noland) Shifflett
Good question Susan. The text only says Poitou & the suggestions given in the dropdown don't include a note for year 1230. Even though all the suggestions show France, when I did some checking, it's shown by FMG - http://fmg.ac/Projects/MedLands/AQUITAINE%20NOBILITY.htm - as a county in the duchy of Aquitaine (but also doesn't attach a date).
posted Mar 21, 2017 by Liz (Noland) Shifflett