The 1905 Indian census gives her Hocąk name as Say Nay Win Kah, which may be a misperception of Sįnį́wįga, "Cold Woman." The transcription suggests Senewįga, which resists analysis.

The 1910 census says that she was 1/4 white, which means that one of her grandparents, most likely a male, was a white man.

Victoria Brown summarizes what has been passed down about Betsy:

Betsy Thunder was a respected Ho-Chunk medicine woman
known for her skill in making remedies from roots and plants.
Thunder was born near Black River Falls in the 1850s, although
her exact birth year is unknown. She was a member of the
Ho-Chunk tribe, also called the Winnebago Sky Clan. She was a
descendant of the Decorah family, whose founding mother was
Ho-Chunk chief Ho-poe-kaw (Glory of the Morning).
Thunder married a medicine man who was much older than
she was. He taught her how to collect, prepare, and administer
traditional and ceremonial medicine, and hoped that she would
pass the knowledge and skills on to the next generation after his death.

Thunder became well known in the area for her skill with medicine. She
treated both Ho-Chunk and white patients, despite knowing little English.
As was the custom for Ho-Chunk healers, Thunder received gifts of clothing,
food, or blankets as payment for her work. One of her patients gave her
lumber to build a small cabin in the town of Shamrock, and the people of the
town built the cabin in appreciation. In the early 1900s, the U.S. government
ordered Thunder's tribe to be moved from Wisconsin to Nebraska, but she
refused to leave her ancestral land. Thunder hid in the hills of Jackson County
and remained in Wisconsin until her death. (Brown)

The 1885 Wisconsin State census shows her living next to William Thunder and his wife, as does the 1910 Federal census. The latter census states that she had had ten children of which only three were still living at the time. Two dwellings away (in 1885) is a John Thunder, who may also be a son. In the 1900 Federal census, Henry Thunder is indicated as one of her sons. The 1905 Indian census explicitly identified three of her sons: William, Henry, and Thundercloud (a unitary name).

The 1910 census lists her occupation as "Doctor, General Practice."

1885 — Betsy, living with her 19 year old son, Henry, in Albion, next to her son William and his wife, moved with her presumed son John to neighboring Manchester between the 1st and 13th of June. (1885 censuses)

1900 — Betsy was living in a lodge next to the wooden frame house of her son Henry in Manchester township, Jackson County, Wisconsin. (1900 census)

At least one genealogist has proposed that Betsy's husband was White Thunder (b. 1821) inasmuch as they are so identified in the 1900 census from Wittenberg. This woman, however, is named "Bettie" and is said to have been born in 1815. Unfortunately, the same census shows a Betsy Thunder (b. 1823) living by Henry Thunder (her son) in Manchester in Jackson County. Wittenberg is in Shawano County. The Manchester census was conducted on the 1st of June, that of Shawano County on 13 June. Therefore, "Bettie" is not likely an alternate name for Betsy Thunder.

Something similar is seen in the 1885 census. In the township of Albion, on 1 June, John Thunder is listed with 4 males and 1 female, followed by Snider Bear (an in-law?), 2/1; Betsy Thunder, 1/2; and William Thunder, 1/1. On 20 June, in the township of Manchester, we have John Thunder, 3/2; M B Thunder, 1/1; Betsy Thunder, 1/1. Notice that John went from 4/1 to 3/2 while Betsy went from 1/2 to 1/1, but a new female emerges, M. B., who has the missing 1/1. This suggests, since they were all living in lodges at the time, that they moved shortly after 1 June, to their usual home base in Manchester, which is divided from Albion Township by Perry Creek. So in this case the plausible explanation is that on or slightly after 1 June 1885, they packed their lodge hides, and moved a few rods or miles into the next township where they were counted again by a different census taken on the 13th of June.

ask our community of genealogists a question.
Sponsored Search by Ancestry.com
DNA
No known carriers of Betsy's DNA have taken a DNA test. 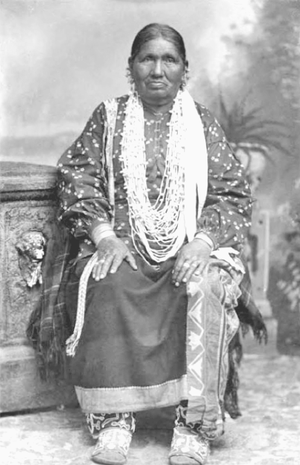