Antonin Scalia was a United States Supreme Court Associate Justice. He was appointed by President Ronald Reagan on September 26, 1986, and served until his death on February 13, 2016.[1]

Antonin was born March 11, 1936, in Trenton, New Jersey. He was the only child of Italian immigrant parents Eugene Scalia and Catherine Panaro.[1][2]

The 1940 Census enumeration cited indicates that Antonin is a 4 year old daughter born in New Jersey and living with father S Eugene Scalia and mother Catherine Scalia, both teachers. This fits his biography except for the sex. We've included the source as the only record found in the 1940 census which matches the parental data provided by the Wikipedia source (1-2 of 2 results for search criteria Name: antonin scalia, Event: Birth, Event Range: 1936-1936, Father Name: Salvatore Eugene, Mother Name: Catherine Louise. The second record pulled is for a Lester Scall with parents named Jacob and Belle.) It is our belief that the sex was an error made by the census taker based on the name given.

Is Antonin your relative? Please don't go away!

ask our community of genealogists a question.
Sponsored Search by Ancestry.com
DNA
No known carriers of Antonin's ancestors' DNA have taken a DNA test. 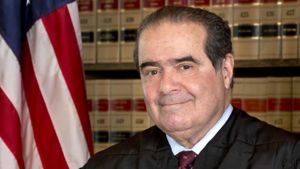